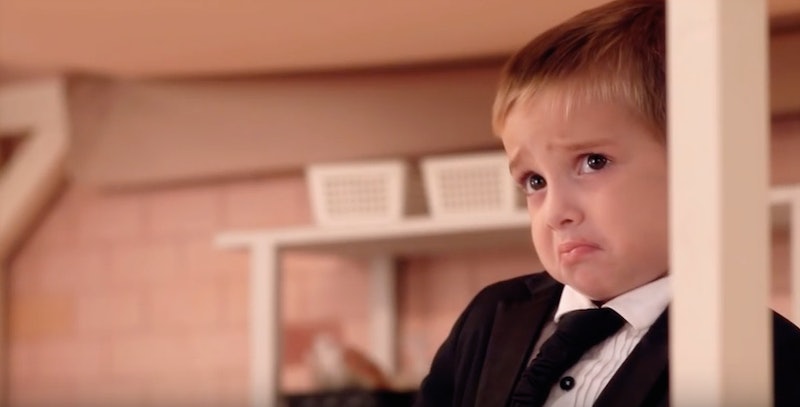 If you’re still missing (and don’t feel totally betrayed by) How I Met Your Mother, I may have an adorable substitute for you. The people over at Romedy have created a parody of How I Met Your Mother starring toddlers, literal toddlers. Of course my mind was boggled: "Ted didn't meet Marshall and Lily until college! Robin was in Canada that entire time!" True, true, true, but then I mulled it over again and realized, “Wait, this could make for a decent kiddie spinoff.”

Oh, surely if you were a child of the '80s and '90s you'll remember when classic cartoon franchises reinvented themselves with a kiddie version. For a very long time a slew of your favorite showers had younger versions of themselves created (with varying levels of success). So, while this is all in good fun, make no mistake: The idea of a How I Met Your Mother: Babies Edition isn't as farfetched as you would think. And, as an expert of the genre (I've watched everything from A Pup Named Scooby Doo to The Flintstone Kids), and I can easily imagine what it would be like.

Just to throw it out there, the series would have very Rugrats-meets-Friends episodes. Such as...

Baby Ted has been searching all over the nursery for the perfect field trip buddy, and he thinks Baby Robin is the one. There's just one problem: Baby Robin says she likes him, but she's not sure if he like-likes him. Baby Ted then makes it his life mission to convince Baby Robin to fall in like-like with him... or risk going to the maple factory with nobody to hold his hand.

Baby Marshall and Baby Lily have been hanging out a lot lately and Baby Ted is jealous. When Baby Lily steals Baby Marshall's dinosaur toy, the two undergo a separation, and Baby Ted, trying to comfort Baby Marshall, says she has cooties anyway. This will not end well for anyone, and so close to Christmas, too!

It's Heritage Day at the nursery, and the HIMYM kids have to put on a pageant that showcases their culture. But Baby Robin is scared to preform her rendition of "O Canada" in front of all her friends and family. Will she summon the bravery to sing, or ceremoniously humiliate herself? Or better yet, both?

Baby Barney and Baby Marshall make a slap bet over what song will be played first at the Wiggles' concert ("Big Red Car" or "Rock-A-Bye Your Bear"). Baby Marshall ends up winning the slap bet and hits Baby Barney into next Tuesday. He later has to stand in the corner and think about what he did, because you can't just slap people, OMG.

Yeah, there's definite potential here, still don't know why How I Met Your Dad never panned out. In all seriousness, check out the actual video below for some legen — wait for it — dary cuteness.