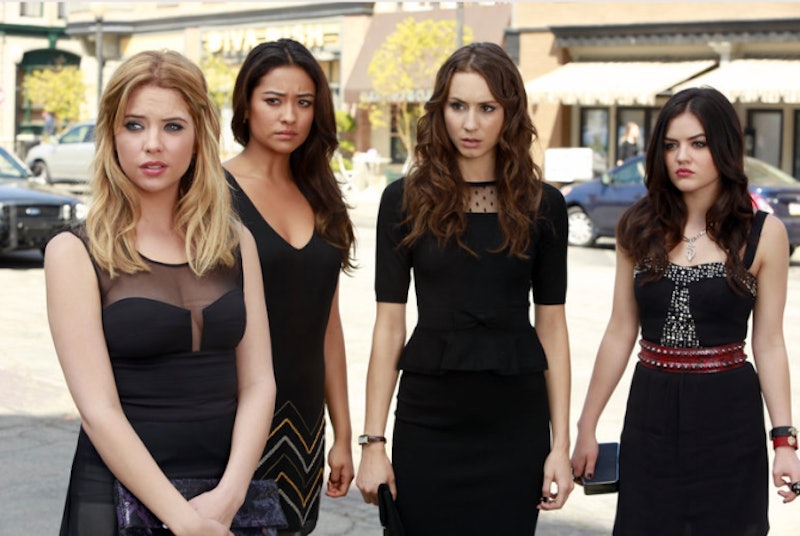 In just two short months, the final season of Pretty Little Liars will be here. With "A" revealed, and a five year time jump to contend with, it's not hard to imagine that there might be more left to the story than one season can possibly explain with. Well, have no fear, the PLL producers feel the same way. In a live stream with Good Morning America, one of the show's executive producers, I. Marlene King, gave life to the notion that there might just be a PLL movie after all. "We’ve got some really big ideas for a great PLL movie, but that won’t happen right after the series ends," King said. "I think we’ll take a little break and let everybody go off and do a few things and hopefully we’ll come back together again and do something really fun and special."

Like other shows before it (think Sex and the City and Lizzie McGuire), PLL seems like an obvious candidate for a big screen spinoff. It's a beloved show with a huge following, a ton of characters and seemingly endless directions for the plot to go in. The five year jump that the new season is using is proof that this story is ongoing. The events that took place in Rosewood over the past six seasons are clearly going to follow these girls for the rest of their lives. There is no escape, and, therefore, no lasting end to the series.

A PLL film would allow for such a creative take on the events of the show. What could the writers do with the format of a movie, instead of an open-ended TV series where they may have had to keep stretching plot lines out in order to fill a season? There are so many possibilities, and so many characters that could be brought back for the movie. (Looking at you, Wren.)

Maybe the girls can go on some fabulous trip like in the SATC movies. Even Lizzie and Gordo got to go to Rome. Who wouldn't watch a movie where Hannah, Aria, Spencer, and Emily went on a girls vacay, and somehow ended up being blackmailed? Just one idea. According to King, we're at least a few years away from any concrete details on the movie, but the good news is there is a chance it will really happen! So, let that console you as you watch the last episodes. It might not be goodbye for good.