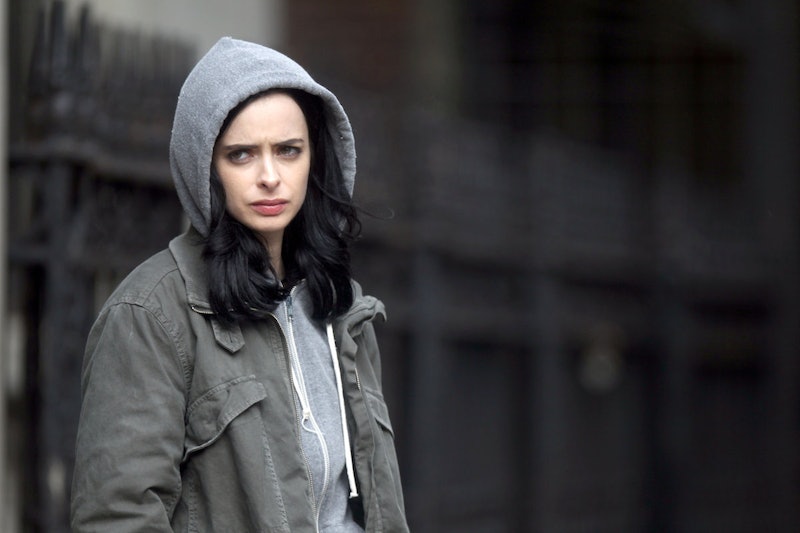 This Friday, Krysten Ritter makes her Netflix original series debut as the titular character in the Marvel adapted Jessica Jones series, and, by the looks of the trailer, this is about to be one badass take on female superheroes. But, Melissa Rosenberg, who has previously penned the screenplays of five Twilight films and worked on shows like Dexter and The O.C., has someone to thank for both the atmospheric mood of the show, and the crafting of her main character. According to TheWrap, she's taken cues from the master of neo noir himself, David Fincher. Because, who understands the plight of an emotionally vulnerable and detached female antihero better than the man behind the film adaption of The Girl With The Dragon Tattoo? Both Jessica Jones and Lisbeth Salander share a lot in common, and there's a reason for that.

Melissa Rosenberg told TheWrap, "I really wasn’t a comic book fan before reading Jessica Jones, but it was such beautiful writing and so rich. That character, I believe he created it before The Girl With the Dragon Tattoo, but certainly the look was influenced by David Fincher's movie. That was one of the references we were looking at. They do kind of cross paths in some ways."

Whether or not Rosenberg is speaking to possible narrative ways that the characters cross paths, or others ways in which the two share certain characteristics, one thing's for certain: There's no better female antihero — complete with some of the most complex and interesting psychological conflicts we've ever seen on film — to study than Lisbeth Salander.

Rosenberg continued, saying, "They both have that dark history, but they’re really very different characters." Obviously it would be a disservice to write the characters off as one in the same, but for the sake of having some fun with this, let's take a look at the ways the two characters intersect.

1. They Are Atypical Superheroes

As in, not really superheroes at all. Sure, Jessica Jones technically has superhero powers, but she claims in the trailer that when it comes to superhero-dom, she's "been there, done that." And Libseth Salander? David Fincher told io9 in 2011 that he's "vehemently opposed" to the idea that she's a superhero at all (though she's been dubbed one, numerous times).

2. They Are Both Investigators

In the trailer, Jessica Jones is asked "You a P.I.?" To which she retorts, "I'm just trying to make a living." Lisbeth Salander, is hired at the beginning of GWTDT to investigate a 40-year-old murder case.

3. They Both Have a Haunted Past

Jessica Jones' back story is only hinted at in the trailer, but we know for sure that she's grappling with something specific, much like Lisbeth Salander's own torturous past with violence and abuse.

4. They Are Both Physically Strong

Jessica Jones can add "punch through a wall," and "stop a moving car" to her resume, while Lisbeth Salander has the kind of physical strength that allows her to not only fight with men three times her size, but actually beat them to a pulp.

5. They Are Both Alienated

Both Lisbeth Salander and Jessica Jones seem to be isolated in their own right. Salander for her inability to "fit in" with societal standards of normalcy — both in her outward appearance, and way of thinking — and Jones for her possession of superhero powers, and what looks like a possible case of PTSD.

6. They Both Know How to Wear A Hoodie

An obvious similarity that, of course, needed to be noted. Though Libseth Salander's physicality is much more jarring, Jessica Jones still wears that hoodie with an alarming amount of, well, badass-ery.

7. They Have Broadened The Archetype Of The "Female Vigilante"

Lisbeth Salander and Jessica Jones share some space with an otherwise heavily male dominated sphere of "tortured, yet strong" protagonists and heroes/antiheroes. But, it's the unapologetic complexity of each character — with flaws and contradictions, who'd have guessed! — that are really changing the game. And, not just for superheroes, but for women in TV and film everywhere.

If I had to guess, I'd say Lisbeth Salander would approve.