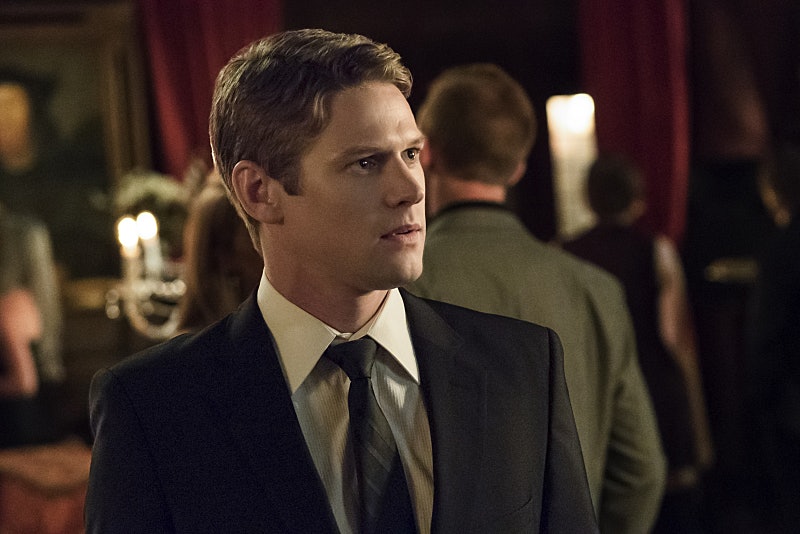 Mystic Falls has never been considered a safe place to live. I mean, it's basically proven to be a magnet for dangerous supernatural activity. So it wasn't all that surprising when the townspeople finally decided to get the heck out of dodge this season. (Well, technically, they were instructed to leave by our beloved TVD scooby gang, but you know what I mean.) But here's the thing — this supposedly abandoned town is not actually as abandoned as we originally thought. After noticing that one of the workers at Lily's party was acting strange last week, Matt and Bonnie followed him to the Mystic Falls high school where they stumbled upon two dozen humans who were all hooked up to IV bags. Apparently someone has been compelling these people on TVD , but who? And what exactly do they intend to do with them?

Normally, you would assume that a vampire is to blame for all of this, especially considering the sheer volume of people this is happening to. (Matt found similar set ups at the Mystic Grill, supermarket, and court house.) And it does sound like something right up Julian's alley. However, it seems hard to believe that he's been back long enough to arrange such a strategic operation. And even if he was the mastermind behind all of this, he doesn't come across as someone with much self restraint. So then why don't any of these human have any bite marks on them?

Thankfully, Valerie agreed to help siphon the compulsion out of everyone, but it won't take long for whoever's doing this to find more humans to replace them. For me, though, the more pressing question is why? What is the point of hydrating and feeding these humans if you aren't feeding off of them? As Matt eloquently stated, it's like someone is fattening the cattle up for the slaughter. But I'm still unsure of what the actual endgame would be in this scenario. To raise an army of compelled humans? No offense to my own race, but we still wouldn't exactly be a fair match against vampires.

And let's not forget the fact that Beau showed up shortly after Valerie was done siphoning. Was this just a mere coincidence that he happened to track them down there or is he the one behind all of this insanity? Only time will tell for now, but at least our boy Matt is getting a somewhat compelling (pun intended) storyline for once.