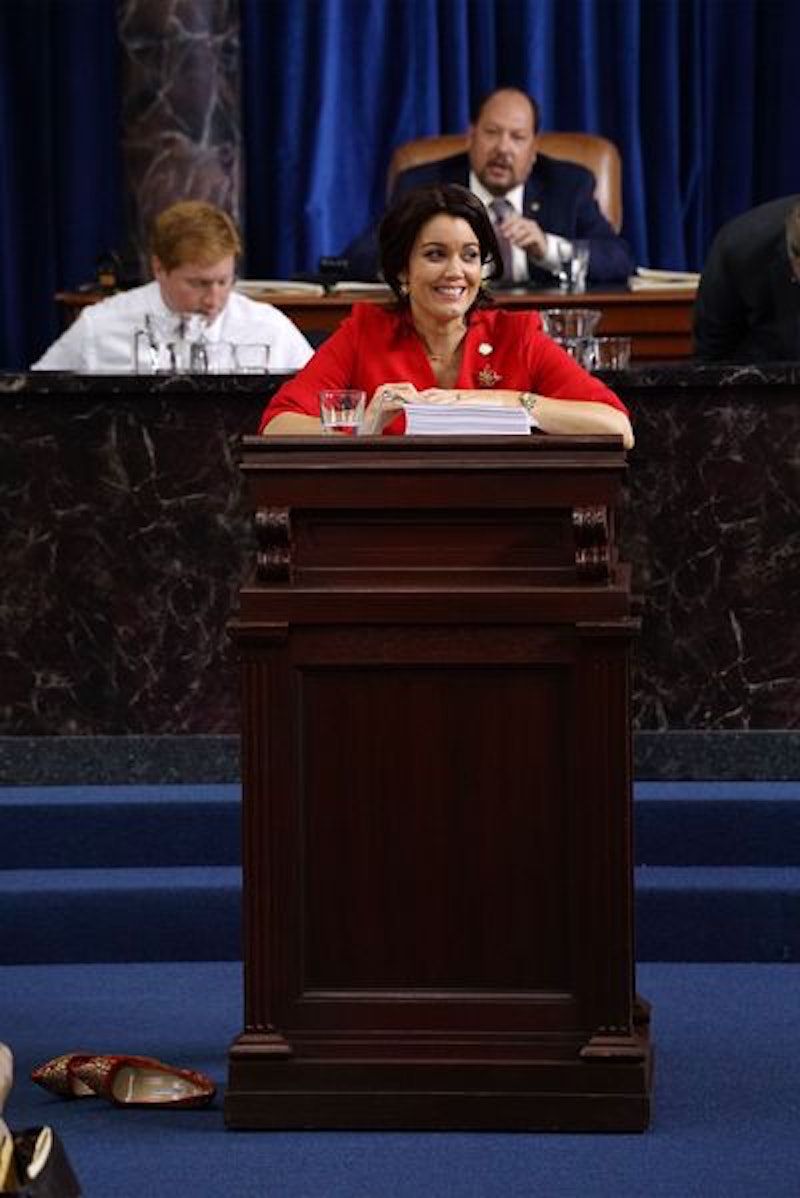 In case you had your doubts about Mellie's abilities as senator of Virginia on Scandal, let those all officially be erased. She's definitely had a hard time lately, but she finally found her footing, and all in the name of an amazing cause. Remember that time the actual, real U.S. House of Representatives decided to defund Planned Parenthood earlier this year? The fictional U.S. in the Scandal universe is currently going through the same issue, and one of my very favorite TV characters ever just isn't going to let that happen. Mellie started a filibuster to stop the defunding of Planned Parenthood, and it was every bit as awesome as you'd imagine.

And if you were reminded of Texas state senator Wendy Davis and the time she did her own filibuster for 13 hours to keep an anti-abortion bill from passing while watching this, you weren't the only one. Although Mellie wasn't quite as prepared as Davis was — and sweat a whole lot more — it was basically Scandal's version of that historical moment, and it was awesome to see.

Right before they took the vote, Mellie stood up, walked to the front, and effectively pissed everyone off. Because this particular hearing? It took place right before the government took a break for the holidays, meaning that Mellie was officially cutting into everybody's Christmas, and she seemed pretty proud of it. This is hardly the first time I've wished Mellie was a real U.S. senator, but as someone who fully supports everything Planned Parenthood does, I'm wishing she was an actual person extra watching these scenes right now.

And no, she's definitely not having fun with that filibuster, but she's doing it!

Of course, Mellie's filibuster ends up making national news as she stands up at that podium and slowly reads a big binder of all the ridiculous things the government's money does go to under discretionary spending, like a study of hangry people and premium Linkedin accounts for government employees. Yeah, that's pretty ridiculous, especially if they're OK spending money on that and not something as important as women's healthcare.

If they don't end up coming to a decision, it could cause a government shutdown, but Mellie's totally willing to make that risk. Could this be the moment she makes history? Maybe that presidential win she has in her sights isn't that far out of her grasp after all.

More like this
Watch Jacinda Arden’s Devastatingly Honest Resignation Speech
By Sam Ramsden
Twitter Is Identifying With Sally Field & Jane Fonda’s Friendship In New Viral Video
By Jake Viswanath
Man Meets Politics: ‘Boy Meets World’ Star Ben Savage Is Running For Congress
By Jake Viswanath
Who Is Murray Bartlett Dating? 'The Last Of Us' Star Is Extremely Private
By Alyssa Lapid
Get Even More From Bustle — Sign Up For The Newsletter
From hair trends to relationship advice, our daily newsletter has everything you need to sound like a person who’s on TikTok, even if you aren’t.