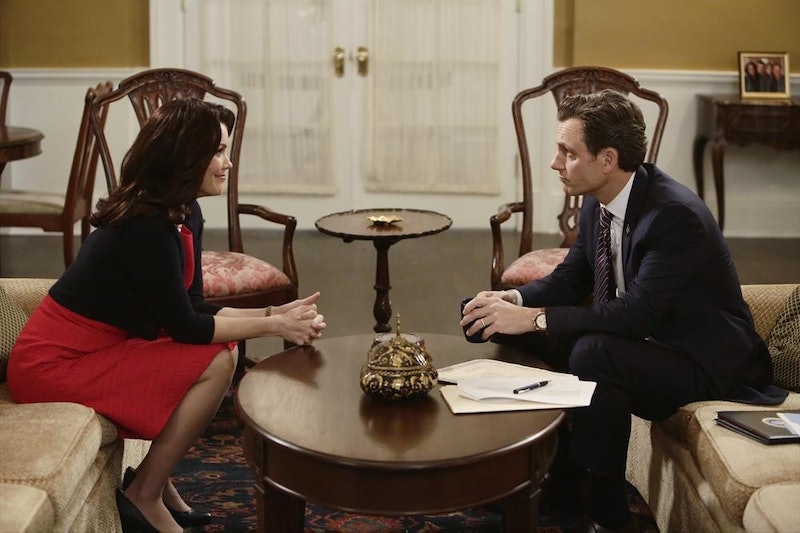 Mellie Grant is the most satisfying character to watch on Scandal, period. While everyone else has fluttered over Olitz and “will they or won’t they move to Vermont and make jam together” or Olake and “standing in the sun” with Scott Foley’s abs (which, admittedly, I would totally do), I have been obsessing over Mellie’s amazing character arc. So you can imagine how thrilled I was to see that Mellie wants to be President.

She started out as a political wife; then she morphed back and forth between diabolical woman scorned, grieving mother, rape victim, and political genius and did so with ease, never letting her peers (or viewers, for that matter) know what she’d do next. After her son died last season, Mellie really went off the deep end (you didn't forget "Smellie Mellie, did you?), wearing Ugg boots and a bathrobe, sipping moonshine, and munching on Cheetos like they were going out of style (it was very Britney Spears circa 2007). It was all so unlike her, the polished, perfectly presented first lady that had stood at Fitz’s side. Luckily, she bucked up and got it together, and she and Fitz have had the best relationship yet this past season.

And the kidnapping storyline has only fortified Mellie further: With Olivia missing and Fitz on the hunt to get her back, Mellie’s finally really voicing some of the things that she wants.

Fitz wants Liv back from the clutches of Vice President Andrew Nichols, and Mellie wants to be the first woman to be President of the United States of America. She feels that it’s a reachable goal, and she wants Fitz to help make that happen. With a Hillary Clinton potentially on the real-life ticket in 2016, I am all about Mellie's concurrent storyline. And to boot: Mellie would be a much better president than her husband, and I can prove it.

A few seasons back we learned that Fitz was having a problem with women in the polls during his election time. He naturally fumbled any attempt to redeem himself with women voters, because that’s what Fitz does: If it doesn’t involve Olivia, he’s can't do it.

Mellie, however, went off script during a press conference and talked about her being frigid because she just had a miscarriage. BOOM. Poll problems fixed. I'm pretty sure she whispered something like "you're welcome" to Fitz, but I couldn’t hear it over the sound of Mellie dropping the mic.

Mellie adapts easily to the situation at hand and nails it — a perfect skill for dealing with international relations on a presidential level. Fitz, on the other hand, could never handle the pressure.

She Uses The Press To Her Advantage

Fitz just kind of mumbles and stumbles through interviews, viewing the press as the enemy. Mellie, though, understands the power of perception and she uses it to great advantage.

She gained high marks in the court of public opinion when she went out to comfort a dead soldier’s family that had camped out in front of the White House, hoping for an answer from the President as to why their son died. Was Fitz pissed she undermined him? Of course he was. Did the act of getting in front of the cameras for a photo op help out Mellie’s approval rating? You bet it did.

Mellie knew exactly what she was doing, and mastering this level of calculation is just the sort of skill a President of the United States needs.

When The Going Gets Tough, Mellie Gets Going

Far be it from me to encourage someone to rig a national election, but Mellie rigged a national election like a boss to make sure that her husband got elected to the White House. If that’s not the move of a seriously tough lady, I don’t know what is.

Mellie is able to push aside her own feelings for the good of her aspirations and the aspirations of her husband: After Liv leaves Fitz, Mellie begs Olivia to come back so Fitz can man up and start being a president again. Is inviting your husband’s lover back into his life an ideal situation? Hell no. But Mellie knows what she needs to do to get the job done. Who’s the handler now, Olivia?

As you likely remember, Mellie was horrifically raped by her father-in-law in a scene I still won’t watch without my hands over my eyes. Then, years later, her eldest son was murdered by Eli Pope. It’s safe to say that Mellie has seen some things.

But she has pressed right on.

On the Fitz side, every time something bad happens to Mr. President, he balls up like a little girl and calls Olivia, silently breathing into the phone until she hangs up. Grow up, Fitz. Maybe your wife could teach you a thing or two.

Our Girl Can Hold Her Liquor

Girlfriend drinks a lot of bathtub hooch. She could probably drink any of the Secret Service boys under the table and come back for more the next day. I feel like Fitz gets drunk off of two glasses of wine and then cries while looking through Facebook. Mellie doesn’t have a Facebook: She is a honey badger, and she doesn’t give a hoot.