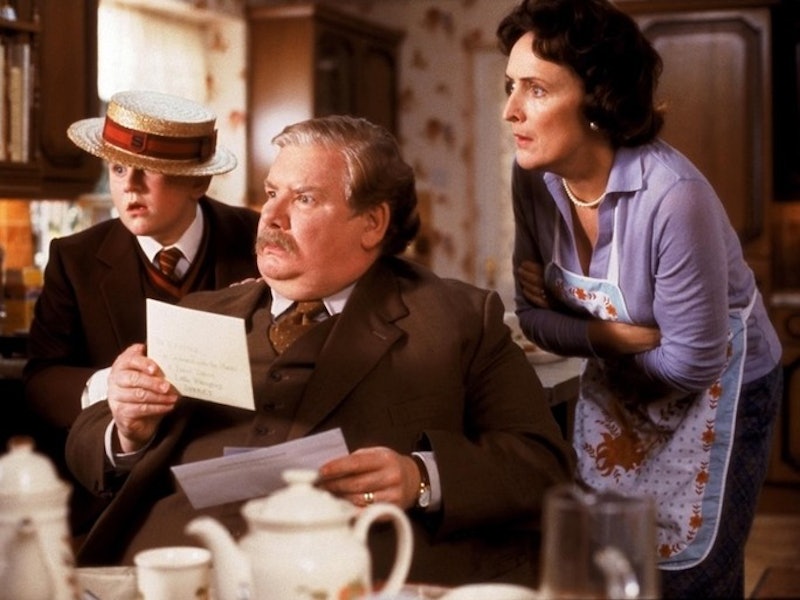 From the theory that Snape is a vampire to the revelation that Dumbledore is actually Death himself, the Internet is overflowing with Harry Potter fan theories. The newest claim? According to Graphic Nerdity's Tumblr post, it is actually Harry's fault that the Dursleys were so horrible to him. No, it wasn't because he was such a terrible child — I mean, he made them breakfast and lived silently under the stairs, so how bad could he really have been? According to this fan theory, the Dursleys' mistreatment of the Boy Who Lived was caused by the dark influence of the horcrux that Harry unknowingly was. After all, the Dursleys were exposed to its dark magic for 10 years, and we all saw what happened to Ron after wearing the locket horcrux for only a few weeks. It's not pleasant.

As you already know, a horcrux is one of the darkest pieces of magic enacted by only the most evil witches and wizards. Creating one involves splitting the soul, which can only happen through the act of murder, and hiding it piece of it in an object in the hopes of of gaining immortality. Voldemort created not only one but seven horcruxes, one of which was Harry Potter himself. The consequences of creating one are grave, but the horcruxes themselves, whether they're a piece of jewelry or a living thing, have evil side effects on those around them, too. They can darken a person's thoughts, make someone angry and aggressive, and even take over control — just ask Ron, Dumbledore, Harry, Ron, Hermione, and yes, the Dursleys. Knowing that Petunia, Vernon, and Dudley were around a horcrux for a decade explains a lot of their evil behavior... or does it?

Some Twitter users thought this theory made a lot of sense, and expressed how mind blowing the revelation really was:

Others, however, were outraged by the theory's implications and victim blaming:

While J. K. Rowling hasn't come out and debunked this theory fully, the Dursleys' backstory she published on Pottermore did shed some light on Petunia and Vernon's hatred of James, Lily, and Harry, and it had nothing to do with dark magic. During a double date gone wrong, James embarrassed Vernon, who, angry and annoyed, stormed out of restaurant with Petunia by his side. After that, the Dursleys ceased all communication with the Potters — that is, until Harry showed up on their doorstep, and since he reminded them so much of James, Vernon, and Petunia took to disliking him immediately.

So, the Dursleys' hatred and subsequent mistreatment of Harry was not born from their interaction with a horcrux, but is it possible that the horcrux amplified it? Since Vernon and Petunia were already pretty awful individuals, the power of the horcrux feeding of their negativity not only strengthened the piece of Voldemort's soul hidden inside of Harry, but also intensified the Dursleys' own mean behavior. We've all seen what a horcrux can do even to the best people, so it isn't surprising it would make already bad people even worse.

Let's face it, the Dursleys suck all on their own, but maybe, just maybe this theory explains how they reached such intense levels of awfulness.

More like this
I've Read The Harry Potter Books 30+ Times & This Plot Hole Haunts Me
By Kelsey Stiegman
The Viral 'Little Miss' Franchise Is Focusing On Mental Health Next
By Darshita Goyal
'The Sandman’s Ending Is A Departure From Neil Gaiman’s Comic Book Series
By Kadin Burnett
'Bridgerton’s Jonathan Bailey & Simone Ashley Just Teased A First Look Of “Kanthony” In Season 3
By Grace Wehniainen, Alyssa Lapid and Sam Ramsden
Get Even More From Bustle — Sign Up For The Newsletter