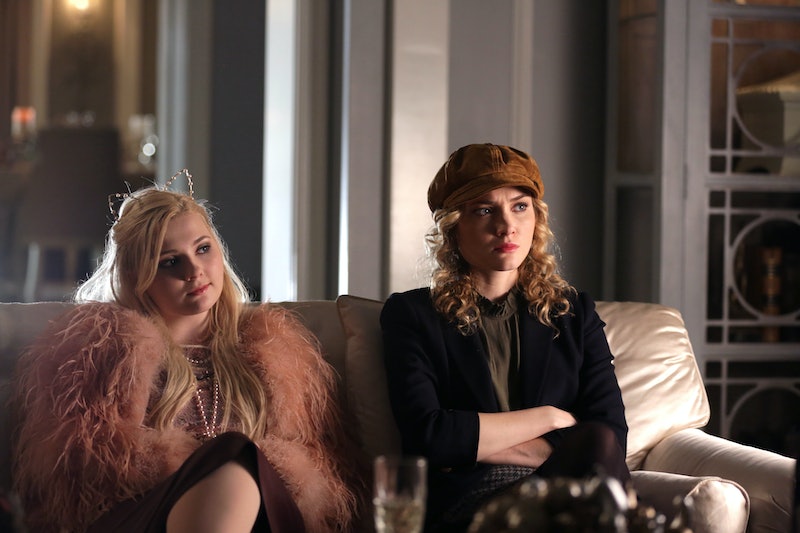 It seems that every episode of Scream Queens puts us just a little bit closer to identifying the person underneath the second Red Devil costume, and yet, we're still so far away from finding out who could want to kill the Kappa girls. That's not to say that we haven't gotten some major clues in the last few weeks, with Tuesday's episode "Ghost Stories" perhaps providing us with the biggest. Dean Munsch finally confirmed what we suspected after seeing Gigi with those photos of two babies in the mental institution: There are two bathtub babies, a boy and a girl. We now know that Boone is the boy baby, but who could Scream Queens ' girl bathtub baby be? It's still a total mystery, but given all of the tiny hints that the show has dropped along the way, we have just enough info to theorize.

By process of elimination, we can finally knock a few long-held suspects for the Red Devil off our list. Earl Grey is (sob!) dead, and clearly isn't the girl bathtub baby. Boone revealed his love to Zayday, so she's also off the "Boone's sister" list, as is anyone not of college age. (Guess we don't have to worry too much about Dean Munsch and Denise anymore.) So, who could the second Red Devil killer be? Here are four options that might make some sense:

Chanel has been pretty chill about murder since the very first episode, where she accidentally dunked her housekeeper's face into a deep fryer. She also didn't really care much about disposing Chanel #2's body, and barely batted a perfectly-mascaraed eyelash when she pushed Hester down the stairs to her death. On top of that, we haven't seen Chanel interact with Gigi or Boone alone, and the only time she was attacked by the Red Devil was offscreen. Suspicious, no?

Yes, Chanel #5's twin boyfriends were killed by the Red Devil, and yes, she was chased down by the Red Devil in her car, but for all the times she was thisclose to death, she never actually got the axe. She has plenty of pent up rage for the Kappas (especially Chanel, who treats her like total crap) but instead of leaving the sorority, she chooses to stick it out. Could it be because she's actually the second bathtub baby, hellbent on revenge?

Am I the only one who totally doesn't buy Hester dying at the end of Tuesday's episode? Tripping on the stairs doesn't seem enough to take this girl down. Hester's another one we haven't seen interact with Boone or Gigi solo, so there's no reason why she couldn't be the bathtub baby. Hester definitely has a weird revenge plan against Chanel, and while she claims it's because pretty popular girls have always treated her poorly, it seems to be more than that. Maybe the reason Hester is hellbent on destroying Chanel is because Chanel is a lot like the girls who let her mother die in the bathtub all those years ago.

Who is the missing link in the Chanel chain? All we know is that she got sent home for meningitis, but what if that's not the full story? Perhaps this so-called illness really had more to do with covering up her tracks as one of the Red Devil killers. It would be a little unfair of the show to make a total rando the killer, but it also might make a lot more sense if it's someone who has been lurking in the shadows this whole time — we certainly wouldn't suspect her.

We won't find out until the season finale who our Scream Queens killer is, but whoever the second bathtub baby turns out to be, everyone else better watch their backs — because you know this girl is going to have a knife.