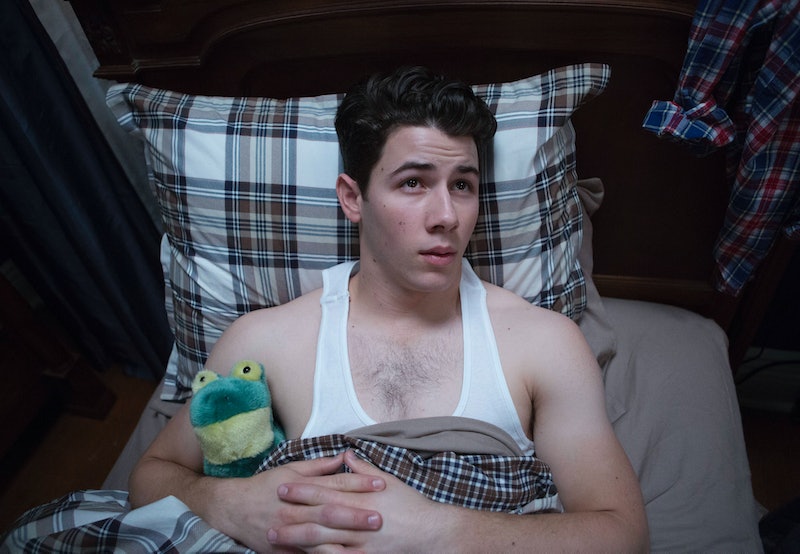 Is anyone else as confused as ever about who's behind the Red Devil masks on Scream Queens ? I know I am — especially since "Mommmie Dearest" revealed that Gigi was holding not one but two babies in her portrait at the mental institution. Grace's belief about the Red Devil killer(s) being connected to the sorority girl who bled out while Grace's mom insisted the group singalong to TLC's "Waterfalls" seems right on the money, but the possibility of there being two bathtub babies has sent anyone who had locked down a theory into a tailspin. Did the sorority girl really give birth to twins that night, or could there be some other explanation for why there were apparently a baby boy and girl in the portrait? This mystery just keeps getting more and more twisted.

The idea of twins does make some sense: there are two Red Devil killers who are dressed identically, which certainly gives off a twin-like vibe. But is that the only possible explanation? I'm not so sure that we should hedge all of our bets on the twin theory without exploring some of these other options first. Here are three other reasons why Gigi may have been holding two babies in that portrait.

Gigi's Daughter Is One Of The Babies

Maybe the reason Gigi felt that she needed to care for her friend's child was because she was pregnant as well. The portrait could have been painted after Gigi had given birth and had two babies to raise. This also supports the popular theory from Reddit user BetterCheshire that Hester is actually Gigi's daughter, without complicating the story we've been told about the Kappa sister dying at the party.

2. The Portrait Has Nothing To Do With That Night At Kappa

The portrait could always be a red herring — at least, when it comes to the bathtub baby situation. Perhaps Gigi was in the institution, but was painted holding two baby dolls, not actual babies. She may have been so distraught over having the baby taken away from her that she started caring for dolls.

Boone Is Gigi's Son, But Not The Bathtub Baby

This is similar to the first theory, but reversed: Boone could be Gigi's biological son, but isn't connected to the bathtub incident at all. Instead, one of the sorority sisters (like, Hester or Chanel #2) is the bathtub baby, and the other Red Devil. It would be pretty cruel for Boone to say that his own mother "needed to go," but this is a guy that faked his own death so he could slaughter his friends.

There only a few episodes of Scream Queens left to give us answers, and right now, the mystery of Gigi's portrait is the one I'm most excited to solve.