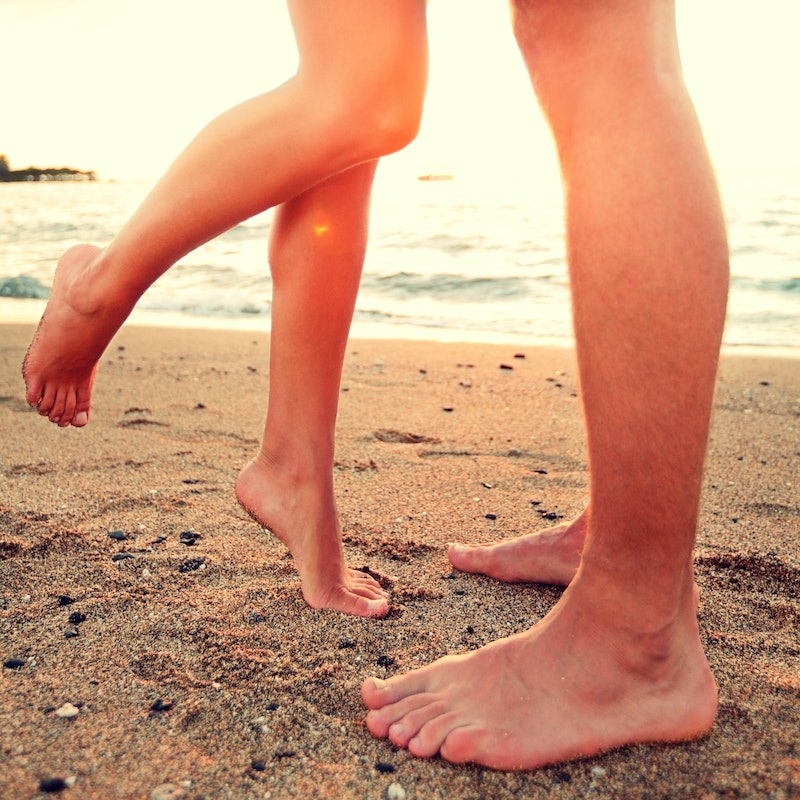 So, I gotta say: sex on the beach is way overrated. It’s one of those things that I think everyone thinks is super romantic when they’re in middle school. Then most of us grow up and sex is no longer an abstract thing we think about and we try it once before realizing that it’s not really worth the hassle. Then again, the first time I said “I love you” to a boy was on a beach on a particularly chilly night in May and I treasure that memory so, so much. While we didn’t have intercourse that night (that was actually when I told him I wanted to have lose my virginity to him), we definitely got a little frisky. So maybe it’s not all nonsense?

I mean, I get it. The beach is super romantic. Waves crashing, moon rising, ocean or lake stretching out into what looks like infinity… Sigh. It’s enough to give anyone a longing look in the eyes as they dream about softly lit sex scenes and tender kisses. However, if you’ve had sex, then you know that sex is a lot more than tender kisses and that things can get, well, a little more rough and tumble when you’re getting it on. While you might be picturing gentle rolling around on soft sand as the moon peeks over the dunes, the reality is more like sandy crevices and surprise crab attacks.

So if you’re dreaming about sex on the beach as the ultimate romantic interlude, I say do it! But do it once and then be done with it. And definitely take these eight things into consideration before you take a roll in the dunes.

1. You Will Find Sand Where There Has Never Been Sand Before

Like your vagina. Or your butt. Like, way, way up your vagina or butt. You know how when you get back from the beach it’s kind of… crunchy for a while? Well, add in sticky liquids and something pumping in and out of your body and imagine just how far up in you that sand is gonna get.

If you’re not into the idea of having sex with sandpaper, you might want to skip intercourse on the beach. Because that’s basically what happens.

Blankets can definitely help with the aforementioned sand-in-unmentionable-places problems. Actually, you know what? Just don’t do it if you don’t have a blanket. Seriously, the sand is too distracting and gross. Unless you’re doing things that can be done while one of you is standing (like oral), a blanket is a must.

4. Even If You Can’t See Them, There Are Critters

Sand fleas. Crabs. Weird little fish if you’re in the surf. The beach is full of little animals who will either be: 1) pissed that you’re disturbing them, or 2) super pumped that you’re baring so much skin for them to nosh on. Either way, not an ideal sex-having situation.

Unless you’re on your own private beach, it’s illegal to have sex in public. And yes, it’s still public if you’re doing it at night. So if you’re going to do it on the beach, find a place that’s remote or hidden behind some dunes if you don’t want to be interrupted by the cops or, even worse, end up in jail.

Those suckers can creep up on you! If you’re by the ocean, then you better watch for the tide coming in. Nothing turns the heat down faster than a splash of ice cold salt water on you and your boo.

7. Is That A Piece Of Driftwood Or Are You Just Happy To See Me?

Just take a quick sweep around before you lay down. You’re already dealing with sand and critters; why add splinters to the mix?

8. Clean Up Is Super Easy

But for real though. All you gotta do is jump in the water! Done!

More like this
The 19 Best Tweets & Memes About Bisexual Awareness Week
By Lexi Inks
Breeding Kinks Have Been On The Rise Since Roe V. Wade Got Overturned
By Lexi Inks
Are Quality Time & Gift-Receiving Love Languages Compatible?
By Lexi Inks
Wanna Try Hinge's New Video Prompt Feature? Here Are 7 Tips
By Lexi Inks
Get Even More From Bustle — Sign Up For The Newsletter