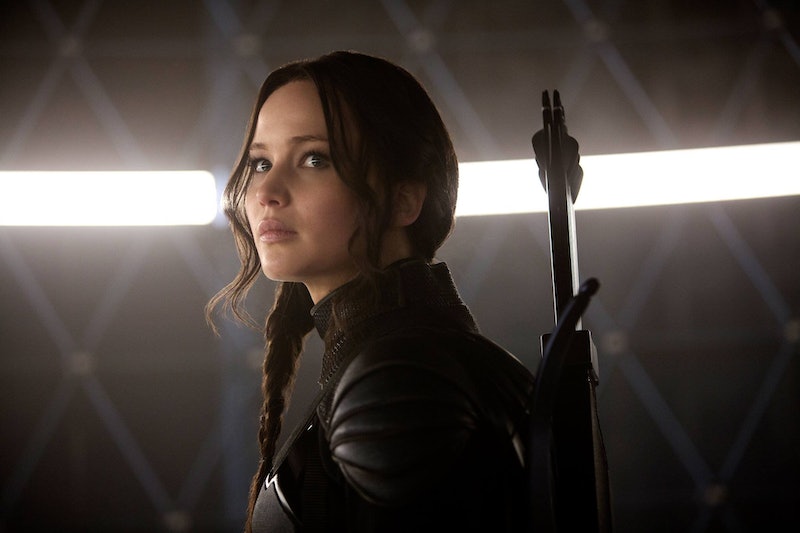 I've always had a few problems with the Team Peeta vs. Team Gale Hunger Games debate. For one: Obviously Peeta wins, duh. But, also, it's obnoxious that a book about a female hero at war is still boiled down by the public into a "but who will she date?" kind of thing. Katniss doesn't need either guy to be kickass and awesome. And, she knows it. In fact, Katniss shuts down the Peeta vs. Gale question in the Mockingjay book, long before the movies were even made and a bunch of fangirls got all testy about whether Josh Hutcherson or Liam Hemsworth deserved J. Law's love.

During the scene where Katniss is making her Mockingjay demands, she asks to have Gale by her side, and Coin is like, "With you how? Off camera? By your side at all times? Do you want him presented as your new lover?" And Plutarch says, "I think we should continue the current romance. A quick defection from Peeta could cause the audience to lose sympathy for her." After hearing their own mini Peeta or Gale debate, Katniss' inner monologue delivers the totally accurate response:

I'm rattled by the turn in the conversation. The implications that I could so readily dispose of Peeta, that I'm in love with Gale, that the whole thing has been an act. My cheeks begin to burn. The very notion that I'm devoting any thought to who I want presented as my lover, given our current circumstances, is demeaning.

You go, girl. The fact that the people in charge were most worried about who their Mockingjay was paired off with is the exact problem we have when the media or just fans in general make it all about Peeta or Gale. It doesn't matter who Katniss chooses or if she chooses at all. What matters is that she's a badass woman uniting the districts in rebellion against the Capitol during a war — and doing a great job of it. Period.