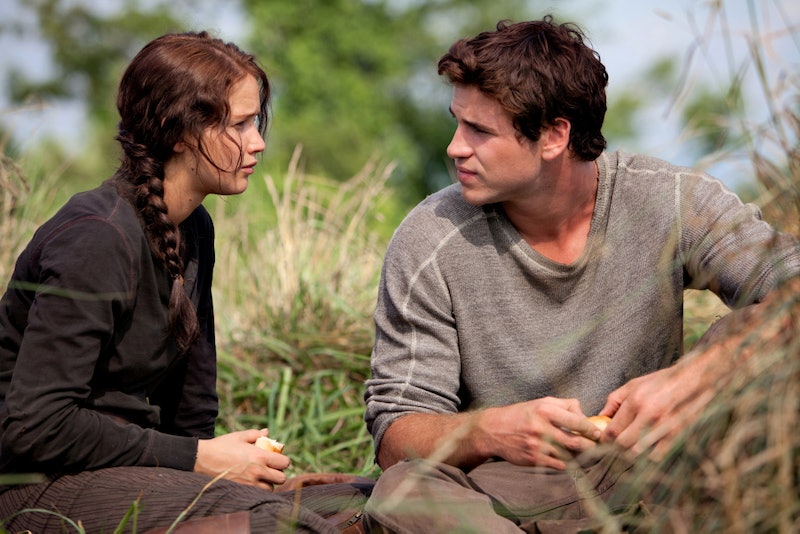 Welcome to the latest edition of The Hunger Games: Mockingjay, Part 2 spoilers — via the books and, most likely, the upcoming film. I'll be your host for the duration of this segment, as I've already covered Haymitch's ending as well as Mrs. Everdeen's story finale — so let's get this party started concerning the biggest question of them all: does Katniss choose Peeta or Gale in Mockingjay ?

The finale of the series hits theaters Nov. 20, and one of the most pressing questions a Hunger Games fan who hasn't read the books yet can ask his or herself is which boy Katniss picks in the end: the dependable Gale, who Katniss has known longer and was there for her while she was nothing but a District 12 resident hunting in the woods, or Peeta, who was there by her side as she entered the life-changing world of the Hunger Games. When you put the choice that way without context, it's easy to mistake Katniss' love life as a Twilight scenario. But Katniss is no Bella, and there are no stalker vampires or wolves that creepily fall in love with anyone's daughter here. If I can put on my literary interpretation hat on for a sec, I think that throwing a romance plot into the Hunger Games (despite the not-so-romantic backdrop of the story), was meant to highlight major changes and development with Katniss' character throughout the series — and it did so really well.

Let's talk about Gale (played by Liam Hemsworth in the movies), who first meets Katniss while hunting in the woods. The fact that they both lost their fathers in the same coal mining explosion is a tragedy that likens them to one another, making it all the easier to form a bond and become besties. Hell, Gale and Katniss even discuss possibly running away together as a means of escaping the reaping. However, the two decide to not run off into the sunset together, due to the fact that they are also both the sole providers for their families — without them, their loved ones would probably suffer, starve, and perish. I, for one, am glad they were both blessed with the heart and common sense to stick it out for their families. On the day of the reaping, Gale reveals that he has very high odds to be picked to participate in the deadly Hunger Games. But as we all know, it's Peeta who gets to be the lucky (haha, no) boy from District 12 to join Katniss, and not Gale.

So, out of sight, out of mind, right? Not so fast. While Katniss participates in the Hunger Games, Gale is pretty much a superhero, as he helps take care of Katniss' mother and sister. He also watches Katniss on television — where he is then subjected to Katniss' romance (a.k.a. publicity stunt done for survival) with Peeta. Talk about awkward, especially when the guy has feelings for Katniss and considered running away with her, you know? It gets even more awkward when Katniss ends up as one of the final eight Tributes alive and cameras make their way to District 12 in order to interview her family and friends. Because Gale is super hot (therefore threatening Katniss' perceived romance with Peeta — because hot guys apparently can't be just friends with a gal), it's decided that instead of her best friend, Gale is made out to be her cousin.

But it's OK-ish. In Catching Fire, Katniss is all about Gale, despite her confused, ambiguous feelings for Peeta. Still, she feels as if she's betrayed Gale with her fake love affair with Peeta, so it appears she tries her best to make it up to Gale, who then does hard work in the coal mines. Katniss hunts for Gale's family and even offers some of her Hunger Games winnings to them (because Katniss totally has the capacity to be a sugar momma by this point). Gale refuses, however, because he's all about that self-sufficient life.

Things get complicated, however, when Gale kisses Katniss in the woods. It gets caught on film and reported back to President Snow, who then pretty much tells Katniss she needs to cut that sh*t out or else her District 12 side piece and his whole family will not survive (as to not ruin the government-approved public perception of her and Peeta's romance). Gale's love for Katniss gets pushed even further into the background, when Peeta takes it upon himself to propose to Katniss during the Victory Tour. And although Katniss eventually explains to Gale the PR ploy behind her and Peeta's "love," when faced with Gale's confession, she turns it down — it is pretty hard to dedicate yourself to anyone when your life hangs in the balance like Katniss' does. The tension between them increases even more when they get into a fight — Katniss wants to run, but Gale (having the rebel spirit that he does) wants to stay and fight for Panem and against the Capitol as riots start to break out in District 8.

Because Gale's life sucks, Katniss is forced to participate in the Quarter Quell as the only viable female candidate for District 12. Peeta also makes the very fake proclamation that he and Katniss are married and expecting. At the end of Catching Fire, District 12 is bombed by the Capitol and Gale survives, ultimately ending up in District 13. He becomes fully swept up into fighting the good fight during the Second Rebellion.

In Mockingjay, the difference in rebellion ideologies between Katniss and Gale start to come out at full-force, making their relationship fragile and splinter. Katniss tries to hold onto some sense of morality, while Gale's hatred of the Capitol has skewed his views into defeating them no matter what the cost. But the breaking point of their relationship comes in the face of Prim's death. She is killed by a fire bomb that might have been made at Gale's hands, despite the order coming from President Coin (who Katniss kills in revenge). This realization is the final nail in the coffin that separates the two entirely. Katniss cuts off all ties with Gale. And so, after the rebellion, Katniss returns to District 12, where after not quite committing to Peeta all the while, comes to realize that Peeta is the man she needs and wants for this stage of her life (despite Peeta almost killing her after getting kidnapped by the Capitol and having his memories tampered with to make the love of his life out as an enemy).

Gale ends up moving to District 2 at the end of Mockingjay, where he secures a sweet gig working for the government. Katniss goes on to marry Peeta and has children with him — and it totally makes sense. Katniss describes Gale as being too similar to her in intensity and that was something she didn't want moving forward after the events of the Hunger Games and the Second Rebellion. While she very well may have loved Gale and could have been with him before, the fact of the matter is that by the end of Mockingjay, Katniss is a different woman — different in a way only Peeta can understand and emphasize with, giving their traumatizing, shared experiences. Katniss is no longer the Katniss that Gale fell in love with — and vice versa. They grew apart, as people tend to when they grow up, learn more about themselves, and develop different priorities.