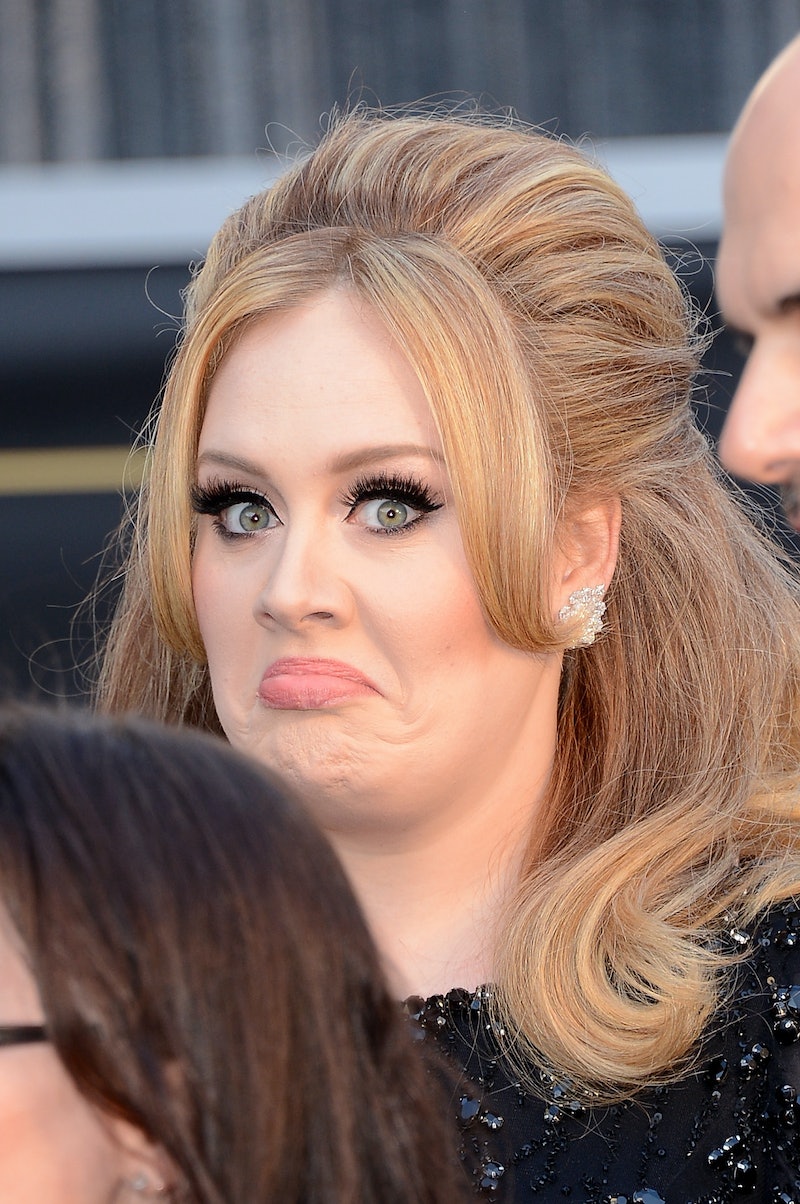 As if you didn't already know, everyone's favorite heartbroken songstress released her third album on Friday, and Twitter wasted absolutely no time in busting out the Adele 25 memes. While Adele had promised that this record had her in a different headspace than the massively successful tear-jerker of a breakup album that was 21, the breakout single "Hello" alerted us all to the fact that she was going to make us cry all over again. 25 feels very much like a sequel to 21 , equal parts heartbreak and ensuing strength, with a little bit of funny bitterness mixed in.

Fans have been cathartically and hilariously expressing their emotional responses to the album. Some of them are sad that they haven't been able to listen yet. As the New York Times reported, Adele hasn't released the album for streaming, meaning that those people who count on Spotify for their music are left trying to figure out whether to actually buy an album for a change. It looks like lots of people have; the album is top on iTunes and is expected to break sales records. From those crying that they have to buy music in 2015 to those crying over their exes, here are some of the funniest reactions to Adele's 25.

1. Begging Her To Take Their Money

They know they won't be disappointed.

When is too early to cry and drink wine?

3. Realizing All The Songs Are Hits

Wouldn't be the first time.

4. Freaking Out Over "The Remedy"

Such a heart-breaking ballad.

Looking at you, 1D and Biebs.

Or wait... they're all perfect.

9. It's Not Always Pretty

Unless you're a cute cryer.

"Send My Love (To Your New Lover)" is surprisingly danceable.

12. Wishing She Would Get With The Times

The thing is, people will buy her CD.

You owe it to yourself.

But no one's coworker sounds that good.

16. Adele And Chill Is Not A Good Idea

It's a good day for Kleenex.

From the NYT review.

19. Saying No To Mascara

20. Freaking Out About It Not Streaming

21. Brands Getting In On It

I was wondering what Jimmy Johns would have to say about all this!

And we can't even deal.

26. But Finally Pulling Through

And we are stronger because of it.

Don't you want to get in on this collective release of emotion? Or maybe you are smart, and have work or human interaction that you don't want to sob through today. That's OK, too. I guess.