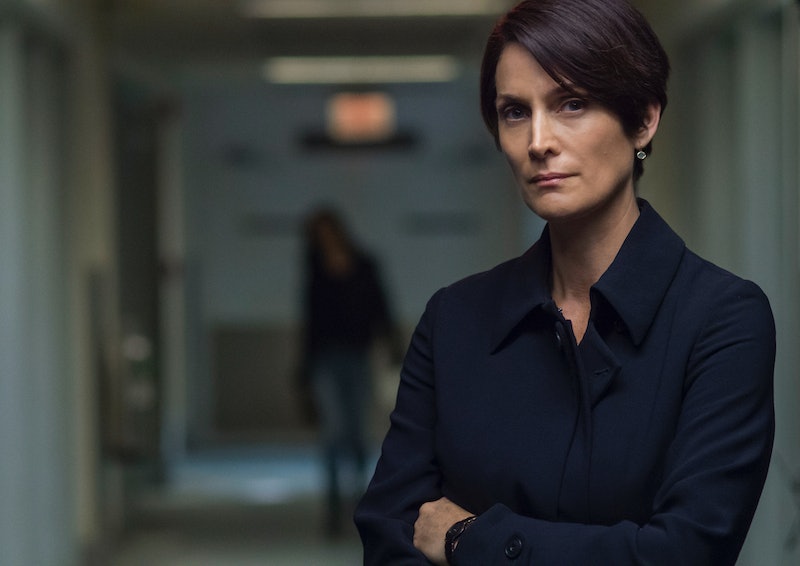 I don't know about you, but I've spent my entire day so far in dark alleys and decrepit offices with Marvel's newest Netflix hero, Jessica Jones. The series, which is the streaming service's follow-up to Daredevil, dropped all 13 episodes of Season 1 on Friday, Nov. 20, separating Marvel fans into Team "I Called In Sick To Stay Home & Watch" and Team "I Really Should Have Called In Sick To Stay Home & Watch." If you're in the former camp, then you've already met Jeryn Hogarth on Jessica Jones , one of the few main characters who's an outsider to Jessica's whiskey-soaked, tenement-style world. Hogarth is a high-powered corporate lawyer, draped in both designer suits and marriage troubles, who gets wrapped up in Jessica's mission to neutralize Kilgrave. Played by Carrie-Ann Moss, Hogarth is one of the show's many blessedly complex and fascinating women and thus worthy of serious discussion. Fair warning, though: there are spoilers ahead up through Jessica Jones Episode 5.

Fans will certainly learn more about Hogarth and her motivations as the series continues, but I know enough already to consider her a huge asset to the realistic (as real as a universe with superheroes can be) and gritty New York that Marvel has carved out with Daredevil, Jessica Jones, and soon, Luke Cage. Here's what you need to know about Jeryn Hogarth so far.

In The Comic Books, Jeryn Hogarth Is A Man

That's right! Hogarth is a dude in the source material. Creator Melissa Rosenberg told the Wall Street Journal that Moss' character had already been developed as a smart and no-nonsense woman by the time the showrunner decided to give her Hogarth's name and mantle. "I think it’s a great time to be a woman," Moss herself told the newspaper of the role and others like it.

She Had An Affair & Felt No Remorse About It

Not only is Hogarth representing as a woman who's succeeding in a male-dominated world, she's also representing as a gay woman who's succeeding in a male-dominated world. And here's where some of that complexity comes in. Hogarth is having an affair with her younger assistant. Her wife Wendy finds out about it, and Hogarth proceeds like she couldn't possibly care less. She even takes Pam for a lunch date to the restaurant where she proposed to her ex. Cold as ice, Hogarth! Not all strong female characters are likeable, and that's more than OK.

She Has A Complicated Relationship With Jessica Jones

Jessica and Hogarth are a combative pair. They need each other, though. Jessica needs Hogarth to keep her in work; Hogarth needs Jessica to do the less-than-savory legwork for her clients that she can't in her position. Moss told the Wall Street Journal that their relationship is like "a bad flirtation."

She Agreed To Defend Hope For Murdering Her Parents

Hogarth knows how Jessica's time under Kilgrave's control affected her, which is probably why she decides to take on Hope's case. Hope is nothing like the firm's usual clients, but this is where audiences can see that the lawyer's association with Jessica is more than purely business. They do disagree on the methods of finding justice, however. Episode 5 reveals that Hogarth may have hired the bodyguards who prevent Trish, Jessica, and Officer Simpson from kidnapping Kilgrave.

Hogarth is another complicated woman on Jessica Jones, and I'm so excited to watch the rest of her story unfold.