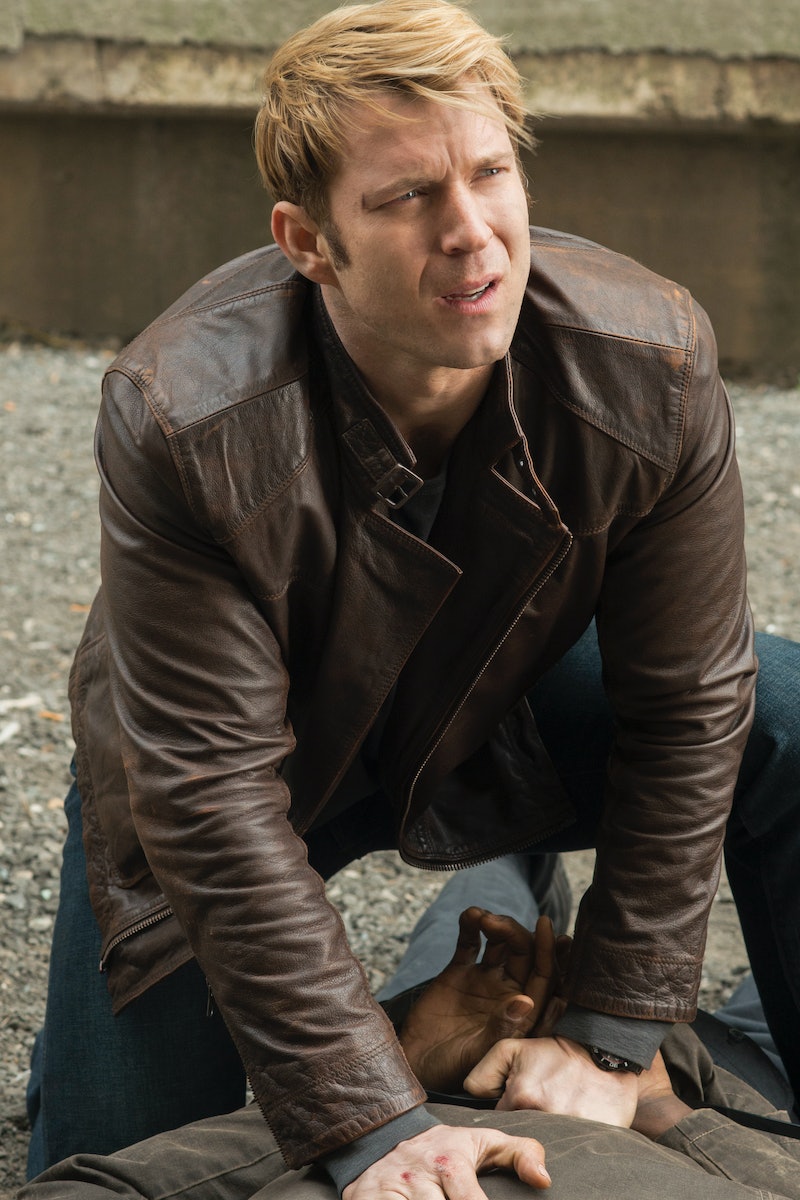 Netflix released my newest TV addiction on Friday, Nov. 20. Every Season 1 episode of Marvel's Jessica Jones is now available to stream on the service, which means goodbye to productivity and hello to super strong private eyes in leather jackets, long nights in Luke Cage's dive bar, and endless shuddering over Kilgrave's sadism. (Marvel, you're the real MVP.) Jessica Jones is brimming with fully-realized female characters, and that's a triumph. But the male characters are interesting too, including Officer Will Simpson, played on Jessica Jones by Wil Traval. The NYPD cop who doesn't exactly make the greatest first impression with Jessica and her best friend, Trish Walker, but his role evolves throughout the season. Spoilers through Episode 5 of Jessica Jones ahead.

So far in my marathon, I'm impressed at the level of paralyzing paranoia that Jessica Jones has been able to create and maintain. Kilgrave's powers call to mind deep human fears like complete loss of personal control and the inability to fully trust anyone, whether that person is a close friend, family member, or a person of authority, like a police officer. Five episodes in, and Simpson has already lived through quite a character arc. Here's the cop's Jessica Jones journey so far.

Kilgrave Sent Him To Kill Trish

A zombified Simpson would have succeeded too, if Jessica and her "gifts" weren't around to defend her best friend. Why did Kilgrave put a hit out on Trish in the first place? Because she had the gall to insult him. And Kilgrave don't play that.

Jessica Saved Him From Killing Himself

If anyone understands that no one should be held responsible for their actions while under Kilgrave's creepy spell, it's Jessica Jones. She follows Simpson to the fancy apartment that Kilgrave co-opted for soccer and leg of lamb and pulls Simpson back from the ledge when Kilgrave instructs him to leave "that way."

He Did Everything He Could To Establish Trust With Trish & Then, Um, Made It Up To Her

Simpson is horrified that he attacked Trish. He shows up to her apartment with a gift: a small revolver, so she'll feel safe around him. He even respects her wishes to keep the door between them while they talk. She eventually lets him in, and things get more intimate from there. That's one way to say "I'm sorry for strangling you while my brain was being controlled by a guy in a purple suit," and another score for progressive sexuality on this show.

Simpson's got a combat background (Trish: "He's a war hero.") and he wants to put it use to help Jessica and Trish prevent Kilgrave from ruining any more lives. Jessica is skeptical, but the cop shows himself to at least have the heart and the will to take on an unbeatable foe. He may not be "gifted," but he's an asset to the fight.

Of course, there's more to Will's story after the fifth episode of Jessica Jones (some of which is detailed here), so to see how he truly fits into the series' plot, we'll just have to keep watching until the end.