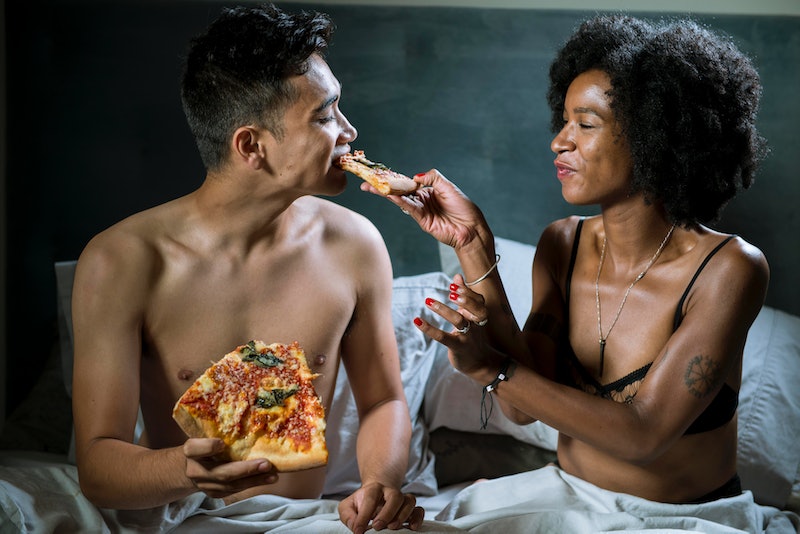 A recent study found that married couples are happiest when they have sex once a week, which I find fascinating and also rather low. But to my knowledge, exactly no studies have discovered the secret of how to keep sex as hot as it was in the beginning. So I had to to enlist a team of experts on this front, because anyone in an LTR has probably wondered once or twice about how people keep it fresh for years to come.

If sex with your partner has felt lame of late, don't hit the panic button just yet — it's worth trying new things, or incorporating past flavors back into the mix. "It is much less work to put a little effort into a current relationship than to go through the loss and change (especially when mortgages and/or kids are involved) and start a new one," Jansen says, "which will get stale in the same way after a while unless you keep it exciting." At least try everything on this list first. 😉

Sure, you know it's a good idea to sext our partners here and there, but such sexts can revitalize your sex life, Rob Alex, who created Sexy Challenges and Mission Date Night with his wife, tells Bustle. There's a reason for this, and it's not that smartphones are sexy: "Anticipation is one of the great key to great sex at any time," says Alex, aka the Guru of Getting It On. "When we are new in a relationship, we always seem to have that anticipation." To keep it the way it was in the first few months, "you need to start getting excited about sex."

If that feels easier said than done, here's what Alex suggests: "Send each other flirty text during the day." Simple enough. You can use these texts to "hint to the event later on in the evening," he says. "This way, your mind starts to imagine the sex you will be having later. That builds the anticipation, as your mind can get pretty kinky with the right motivation."

It's so fun to relive the greatest hits of your sex life with a partner: the time on the beach, the time on the roof, the time in the rain . . . Not just fun, this also has the double purpose of reminding yourself and your partner of how good it can be, and inspiring yourselves to make throwback sex into here-and-now sex.

"Reminisce on what was super fun at the beginning," says Jansen. "Talk about what made it so fun and what ingredients were essential." And then bring circa five years ago into circa now. "Try and use some of those ingredients to create new experiences," she says.

A "sexual bucket list," that is, psychologist Nikki Martinez tells Bustle. Get out an actual sheet of paper and a pen. (Remember those? Probably stored in your apartment somewhere nearby your stone tablets.) Make "a list of things you have always wanted to do," says Martinez. Then get started. "Make it your goal as a couple to get through this," she says.

Speaking of fun, make sex a game. "Have little competitions," suggests Martinez. "The loser must do something that the other person wants you to do to them and for them." This could be anything from seeing who can sprint to the end of the block faster to who can make a better smoothie. In this scenario, the loser also wins.

"We put green light bulbs in our lamps one time, and I tell you that simple change created an entirely new environment for our intimacy," Alex says of he and his wife. Or buy "some lingerie, a new toy, new sheets for the bed," or try a new sex position, says Alex. "Anything that breaks up the norm of just getting naked getting in the same old bed and making love the same old way," he says. "Bringing something new into your sex life is a great was to stimulate it." And we all know stimulation is a good idea in this arena.

"We have to be playful," Jansen says. "At the beginning, it is usually more playful and exploratory." Not so much as time goes on, at least not for everyone. The possibilities for friskiness are endless: "Start with a pillow fight, or wrestling match, or saying something like, 'You can't have me,' or see how much you can arouse your partner without taking their clothes off," she suggests. "The fun of the beginning should re-emerge when you are more playful."

For two busy people who have to plan their day-to-day lives, sex needs to literally be in the calendar sometimes. "No matter what, make time for this each week, even if you have to schedule it," says Martinez. Especially if things have gotten a little dry, this will ensure that sex happens. "It will come more naturally the more you enjoy yourselves," she says.

"Bring something stimulating to bed with you," says Alex. "We love to use simple hot and cold items to stimulate sex — it's like putting jumper cables on your sex life." If you've never tried something like this, start this way: "Get some ice cubes and some hot tea or coffee," he says. "Stimulate your partner with the ice cubes, and then dramatically change it by taking a drink of the warm tea or coffee and using your mouth to stimulate them." Be careful! "Make sure the coffee or tea is not too hot," he cautions.

"Add some mystery," Jansen says. "Everything is new at the beginning." Once you know exactly what shirt your partner likes to wear on Tuesdays, or they know what perfume you wear when you're in a good mood, the mystery fades. At the start of a relationship, it may seem that everything is off the cuff, but that is actually not so: It took a lot of planning to be that exciting/cool/witty/fun. "We think that it was all spontaneous at first, but usually outfits, positions, toys and new ideas were all very well-planned in our fantasies when we were apart," says Jansen.

Bring that level of planning back to your LTR, she says. "Plan something fun and edgy — a surprise, and something new and different." This can be a bedroom-related surprise — or not. Surprise in general can shake things up. "Even asking for something new, or incorporating some dirty talk, or making a suggestion/invitation over email . . . will heighten the anticipation and intensity." Bonus points: Ask for what you want in a handwritten note in an envelope, she says.

Also, if you've been with someone for a long time and you're feeling like you're in a tired routine, remember that you're not the first to feel this way — and you won't be the last. How to keep things hot "is an age-old question, I think," Roberts says. "Esther Perel covers the topic well in her book Mating in Captivity."

Alex suggests something he likes to call "Strip TV." It's easy to play: Turn on the TV, and "both partners pick a common word, such as 'body' or 'look,' and every time that word is mentioned on the show they are watching, they have to remove a piece of clothing." In other words, if your word is "yes" and your partner's word is "no," watch a show (or a film) and see who gets more yeses or nos.

"That first person completely naked gets to decide the activities that will follow," he says. This sportiveness is important to keep it new, he says. Forgoing playfulness "is the biggest thing that leads to routine sex," he says. "We so often just jump in bed, go through the same steps, and hope to get the same results."

Another game: "Take turns where you alternate trying something that you like out," says Martinez. "So every other time, you get to try something new." Or something old that you love and haven't done in a while. Or something you just did last night but you're dying to do again.

"Get out of the bedroom," says Paiva. Your home is your "playground for having fun," she says. Bring back "some of that inspiration" from the beginning by pulling your partner onto the couch, coffee table, countertop or dining room floor.

"Talk openly about your fantasies," says Martinez. "If you are open to theirs, they will be open to yours." After a long time with someone, it's likely that your desires will change, so even if you think you know everything about your partner, it's worth asking. "Be open to your partners wants and turn-ons," she says. "This will help them be more open about themselves and your needs and ideas." And be gentle, she says: "Nothing will shut down a conversation faster than someone making fun of or not being open to your wants and needs."

"Leave flirty notes for each other," Alex says. "I always have a pad of Post-its notes on my desk for just this purpose." Or "when your partner is in the shower, trade out the underwear they have picked out with your favorites, or some very sexy ones without them knowing," he says.

In other words, do little things that show your partner that you're thinking of them. "Make sure to put a little extra effort into each kiss," he says, and "avoid the pecks." Or just "pick up their favorite treat" at the store, he says, and leave it for them with a nice note.

"Learn to be assertive, and verbalize what you do and don't like," says Martinez. "If you like what you are doing, you will want to do it more often." This goes even for those of us who feel as though they've already figured out how to be assertive and vocal, since preferences change as time goes on. Keep the conversation about sex ongoing.

Just because you're feeling frisky doesn't mean your partner is, or vice versa. "When one person is more in the mood than the other, sometimes it is so sexy just to be together while the other person self-pleasures," says Alex. "You will be amazed at how powerful this can be."

Rather than getting annoyed that your partner is too sleepy to do anything but snuggle, try this, he suggests. "Sharing sexual pleasure doesn't always have to be having sex together, but being together during that self-pleasuring can be pretty intimate," he says. "I also suggest instead of having a quickie that you self-pleasure together at the same time or take turns. It usually is way more satisfying for everyone than a normal quickie."

"You need to rediscover your partner," Jansen says. "We get stuck in thinking that we know what works, and thus sex becomes robotic." Don't go there. But if you have, don't fret: You can come back. "We are always different and changing — like the saying, 'You never step into the same river twice,'" she says. "If we treat each other as though we are the same" as we were in the beginning, "then we have lost our curiosity, and are not exploring what is new about our partner," she says. "See what you can discover that is new and interesting to you about your partner and their body, or responses, or your response to their touch." If you approach with an attitude of curiosity, you can't go wrong.