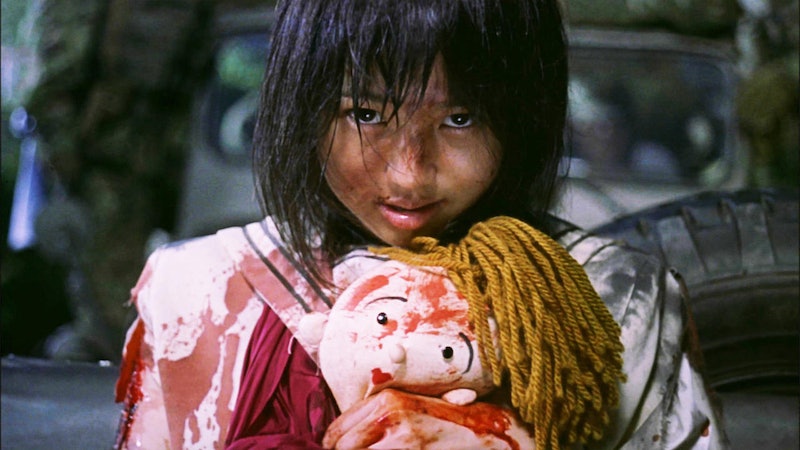 This is the end of an era, you guys. The final instalment of The Hunger Games (Mockinjay: Part 2 ), has finally hit cinemas, and with it we're forced to bid a sad farewell to the garish fashions, perilous love stories, and warmongering fascist regimes at the heart of the dystopian film series which has launched a serious trend for cinematic adaptations of young adult dystopian fiction.

For fans of The Hunger Games desperately looking for something that will fill the void following their first, second and even third cinematic viewing of Mockingjay: Part 2 (there's no judgement here. Move into that cinema if you have to), there's plenty of classic dystopian cinema to check out which will more than satisfy your tastes.

Dystopian movies follow a pretty straightforward set of narrative rules in order to fit the genre, so if you are a major Hunger Games fan then there's a whole feast of films out there full of the sort of restrictive and often violent (or heavily silenced) society under a fascist rule that The Hunger Games has portrayed so well.

So ready yourself in your favourite dystopian fashion of choice (or your oldest, comfiest pair of pyjamas, whatever), grab the friends you would most want to join in rebellious uprising and fire up the popcorn like it's the only food left in the world; here are 13 of the best dystopian movies that you will love.

This '00 Japanese movie in which a government enforced act forces a set of captured 9th grade school students to kill each other, or be killed, is an obvious choice for Hunger Games fans and remains a masterpiece of dystopian horror. But be warned, it isn't for the faint hearted.

The original and one of the best, Fritz Lang's much referenced classic is not only a visual treat but harnesses a narrative (in which the resident of a wealthy utopia discovers an underground world where the impoverished are forced to keep the wealthy, above ground working) which remains powerful almost 90 years after it was first released.

A beautifully shot sci-fi classic about the dangers of genetic engineering, protagonist Jerome Morrow fakes a genetic superiority in order to achieve his dream of space travel. The ever underrated Ethan Hawke is incredible and the tension mounts to a heartbreaking climax.

Though not a 'direct' member of the dystopian family, They Live is still very much worthy of the genre and the only film on the list which could make you seriously concerned that you may already be living in a dystopian society without even realising it. Roddy Piper is the best thing ever in this film, too, playing a man with stupendous one-liners who discovers a pair of sunglasses which reveal the undercover alien beings ruling (and destroying) society.

Set in a fascist future in which all expressions of emotion are outlawed, Christian Bale plays a man reneging against his role as a law enforcement officer in a bid to overthrow the oppressive status quo. Ironically, it can be quite the emotional movie.

Stupendously bizarre, this film from '95 is one of the most unique movies you may ever see, in which children are kidnapped by a scientist who steals their dreams in a bid to slow down his aging process. It's quite simply incredible.

In this outstanding anime, a top-secret military project results in a Neo-Tokyo being put under threat by a member of a biker gang who develops powerful supernatural powers. There are few words which can describe the true awe of the animation and imagination of Akira in action, so do yourself a favor and watch it immediately.

A camp classic, this film from '97 is one of the greatest anti-war films you might ever see. Darkly hilarious, a squad of young and beautiful soldiers are sent by their fascist government to fight against humongous alien bugs. Suffice to say, the fight does not go quite as easily as the propaganda had promised them.

Dystopia doesn't always have to be grim, and Death Race 2000 manages to deliver action and comedy within the confines of a society entertained by morbid brutality. David Carradine and Sylvester Stallone play blood thirsty drivers who score points for mowing down innocent pedestrians. It's basically Grand Theft Auto amped up to the next level.

Have a box of tissues ready, because you will need them. Focusing on the lives of three boarding school students from childhood through to adulthood, Never Let Me Go comes with a harrowing twist as the characters discover a devastating secret about themselves which changes everything. But where's the dystopia? I hear you ask. Just watch it and see for yourself.

Terry Gilliam's surrealist sci-fi, Brazil deals with many on-point subjects such as terrorism, a cultural obsession with youth and an inefficient bureaucracy in such a way that you'll forget that it's actually 30 years old. Dreamlike and often terrifying for it's boundary pushing aesthetics, Brazil has enough emotional resonance and allegorical layers to be perfect for repeated viewings.

If you delighted in the kaleidoscope of couture on offer in The Hunger Games, then The Fifth Element is yours. With costumes designed by Jean Paul Gaultier, the fashion at the heart of Luc Besson's dystopian sci-fi movie is at times so distracting that it watches almost as an elaborate runway show of futuristic cool.

Take cue from the title because this film is dark in every possible way you can imagine. Almost completely stark of color and set in a hellish World void of sun, Dark City is neo-noir at its finest where bizarre telekinetic beings can control humans and also want to steal their souls. Rufus Sewell plays a man desperate to prove his innocence and to take on the dark forces which he believes are out to destroy him.

So, go forth and enjoy the final Hunger Games film, mourn it's end but remember; even though it's finished, there's plenty more dystopian treats to get through when your District 13 withdrawal kicks in. And may the odds be ever in your favour.