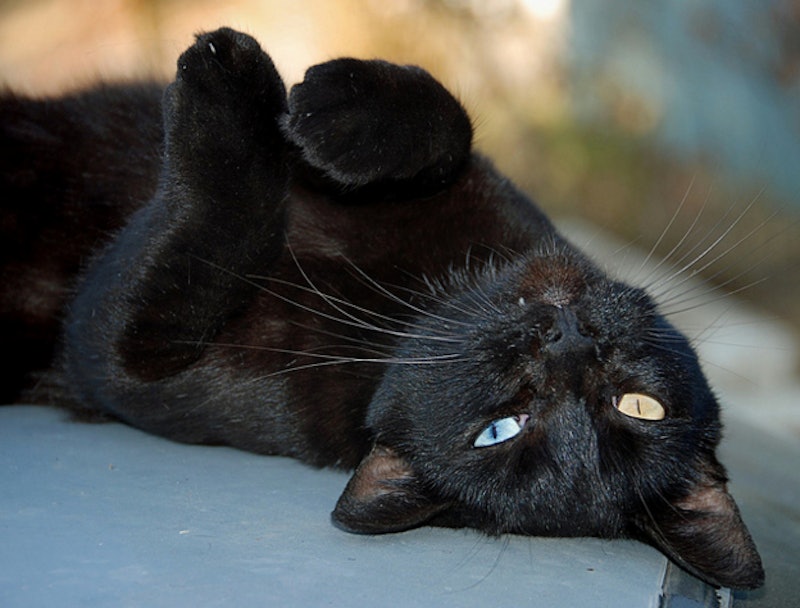 One morning I was walking by the front door of our old apartment in NYC and saw a spider. I was, and continue to be, very much not a fan of them. I've heard that they are helpful and great according to a lot of literature — which I will happily use as a swatter while killing every spider I see. Back to the story. As I reached for my slipper, my Russian Jewish grandmother Mr. Miyagi-ed it out of my hand and told me to leave the creature alone. But why? Why should I let this long-legged dot-thing live? Because, my grandmother said, if you see a spider on your door it means mail is coming.

A spider on the door means mail is coming? I had so many questions. Is this a scientific proven fact? Where there 12 scientists in a room, placing spiders onto doors and waiting for science mail to appear? I bet those Christmas parties were really boring. I digress. I asked my grandmother how she knew this fact to be true. She shrugged and said that is was just an old superstition passed down to her. My follow-up was: Tell. Me. Everything. You. Know.

Turns out that being Russian means having to watch out for a lot of superstitious stuff. And I mean a lot. Whenever you think you've hit the ceiling, you find out you only tapped the surface. I do love the seemingly random nature of superstitions and I genuinely love the ones I grew up with. They are a gentle reminder of home, or the not-so-gentle reminder of the last time I opened an umbrella at home and had to deal with my grandmother's wrath.

I'm going to share some with you here, but if any fellow Russian kids are out there, be sure to let me know if I've forgotten any!

Don't Sit At The Table Corner

Don't Step Over Someone

If your Russian brother or sister is on the couch, propping their legs up on the coffee table and cutting off easy access, do not step over their legs. If you do, you will cause them to stop growing. To reverse this curse, just step back over them and ask that they put their feet down. I have done this before, and it is always fun blocking the TV off while I do this several times.

Unless you want to get into an argument with the other person, do not step on their shoes. This is obviously unavoidable so if you happen to hit them with a foot, just ask them to do the same back to you. Then the spell is broken and you will forever be the best of friends.

While any Google search of this term will most likely bring you to Brazilian Superstition websites, I grew up knowing of this and practicing it. The "Figa" is a hand gesture that can mean "bupkis" and can ward off evil. For example: You meet someone on the street and they compliment your child and how much they've grown. As soon as you walk away you make your hand into the shape of a Figa and put it in your pocket. Tell your kid to do the same. This keeps the evil eye away from you.

Never Leave Your Purse On The Floor

What sounds like a tip you tell your kids to help them be a better guest, is actually Russian superstition. Never leave your purse or bag on the floor if you want to keep your money.

Minute Of Silence Before Travel

This one is a staple of all Russian households. Any time you are going on a big trip, doesn't matter if you are driving or taking a plane, you and your entire family have to sit in silence for a moment. It's for good luck. What ends up happening is that when people will try to sit down, some will still be talking so an argument will arise. It's a fail-safe occurrence. Just enjoy it.

Knock On The Table

This one is familiar to most Americans. You said something nice and you want it to come true. Knock on wood. Or your head.

Spitting Over The Shoulder

You said something nice? Spit three times over your right shoulder and it will come true.

Do Not Whistle Indoors

Just don't. It means you are whistling your money away and will have financial problems in the future. I blame this for why I cannot whistle.

Do Not Open An Umbrella Indoors

While you might think that telling someone "Happy Early Birthday" is a nice thing, its actually considered bad luck. Kind of like counting your chickens before they hatch, you never want to celebrate your birthday early in fear that you will jinx it. This always makes it really hard to plan birthday parties...

Never Show Ailments On Yourself

His face was all scratched up and his eye was red!

Never follow up this statement or statements like that with hand gestures on your own person. In Russian culture, this superstition means you are basically tempting fate into giving you the same ailments.

Look In The Mirror After Coming Back

If you forgot something at home, but you already left the front door, do not come back in. Ask a relative to bring the item out to you. Basically, Russians are just giving you an excuse to be lazy. If you end up coming back yourself, make sure to look in a mirror before leaving again.

Door Posts Are The Devil

Naming Someone After Family Members

According to superstition, you should never name a child after someone who is still alive.

Don't Give Someone A Clock As A Gift

Bad luck all around. Or scarves. Clocks and scarves.

Don't Sit On Rocks or Tables

My mother always told me not to sit on cold rocks or tables. This superstition has to do with women's reproductive abilities. You sit on a rock, no babies for you. (~Science~.)

If you have the hiccups it means someone is thinking of you. The fastest way to get rid of them is to start naming people. If your hiccups stop at a certain name, that person was the one thinking of you.

If it rains the day of your trip, you will have good luck. (It rained every day we were on the cross country road trip to LA with my dad.)

The way you bring in the New Year is the way your entire year will end up looking. So don't fight.

If your ears feel hot, someone is talking massive sh*t about you behind your back. Just saying.

And so is getting pooped on by a bird.

If they cross your path, turn around and go the other way. Or hold a button on your shirt.