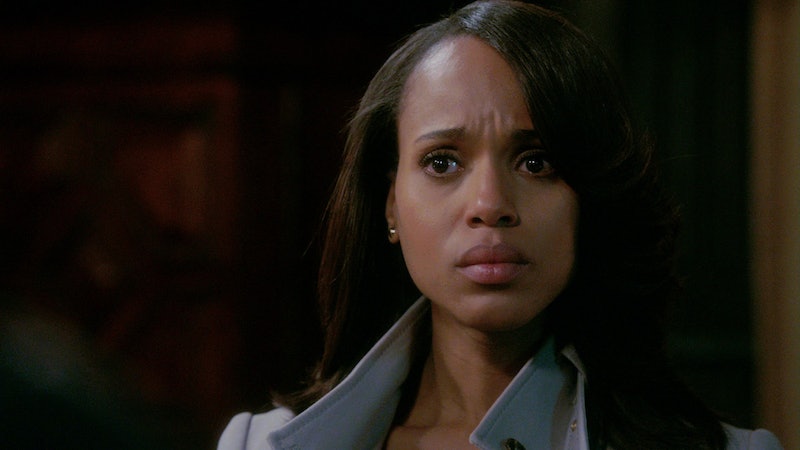 Abortion has always been a difficult topic to film. It's only recently, really, that we've seen the subject dealt with openly on television or in the cinema and even then, often when its brought up it's dealt with in a completely inaccurate or problematic way. Abortion has been repeatedly portrayed in a negative light (such as an episode of Dawson's Creek where Dawson's mother is basically shamed out of getting an abortion by both her son and her husband), stigmatised with misinformation (like Claire Underwood in House Of Cards being told that her previous abortions have made it more difficult for her to ever have children, which is not true with modern techniques) or mentioned without being mentioned (like in Knocked Up where the main characters have to change the word abortion to shashmortion. Because, as we all know, if you can't say it then you can't do it, right?).

So we really have to celebrate Shonda Rhimes' decision to not only deal with an abortion storyline in the mid-season finale of Scandal (and the instant controversy which would follow it), but to also deliver it at a time when Planned Parenthood are having to fight for their very existence and in a way which also feels real.

The scene in question comes with little fanfare. It also doesn't get distracted by any other issues other than the matter at hand: this is something that Olivia Pope needs to do and she gets it done. It's as simple as that. Scandal is groundbreaking for being a network show daring to deal with abortion, and it joins the (small, but growing) ranks of positive portrayals in TV and Film.

In true Six Feet Under fashion, 17-year-old Claire Fisher is pretty level headed about choosing to get an abortion (living in a funeral home must certainly put life in perspective). In the episode "Twilight", Claire talks about her favorite foods with her brother's ex-girlfriend, Brenda in the car ride to the clinic, and the two of them never talk about the procedure or how anyone feels about it. In fact, Claire just makes her choice and gets on with it.

Whilst some women may need to talk about the procedure at length with friends, family and even therapists (and understandably so), there are some women who just want to get it done and never look back, making this portrayal a rare and important one.

Possibly one of the greatest films about abortion ever made (don't let all the hip-to-hip grinding and close up shots of the Swayze distract you), Dirty Dancing is practically a PSA on the importance of keeping abortion a legal right for women. Set in 1963 when abortions were still very much illegal, the plot of Dirty Dancing is set in motion only when lead dancer Penny decides to get an abortion which goes wrong, leaving her in agonizing pain and in threat of losing her life. It's a stark reminder of the harmful and sometimes deadly consequences that can come from removing legality from a procedure which requires regulation and support. It doesn't get realer than that.

In the second season of the UK cult series, Skins, Jal enjoys a touching, and ultimately tragic, romance with good buddy Chris. What's notable about her storyline is that she's the most driven and ambitious of her friendship group; she's a talented musician with her heart set firmly on greatness. When she discovers that she's pregnant, the secret is carried across episodes with a quiet, burdened subtlety. When she feels that it's finally time for her to announce her pregnancy alongside her decision not to keep the baby to her friends, she does it with absolute clarity and confidence (and at a dinner party no less).

The decision feels right for her character, and as an audience we're not forced to question whether it's the right or wrong one for her to make. Instead there's a focus on how personal a choice it is. There's no lingering on the subject matter or over-analysis, instead we're shown an insight on one of the hardest parts of the abortion process: making, and coming to, that final decision.

In a powerful plot line from season 4 of the football drama, teenager Becky gets pregnant by her boyfriend Luke and seeks guidance from school principal Tami Taylor (goddess!). The episode is heartbreaking, choosing to portray abortion from a personal rather than a political standpoint. The message, however careful they deal with it, is a powerful one with Mrs Taylor telling Becky that having an abortion or keeping a child is never an easy choice, but that whatever she chooses is the right one for her. She also answers a definitive, devastating no when Becky asks whether she'll go to hell for having an abortion.

Possibly one of the best rom-coms of the past decade, Obvious Child is a film which knows where it's finale will be resting and makes no apologies for it. With a wonderfully charismatic protagonist (played by Jenny Slate) and a terrific cast of supporting characters (including the always on form Gaby Hoffman with some of the best on screen feminist rants I've ever heard), Obvious Child drops the A-bomb with a natural ease which reminds us that yes, it's a common occurrence for a lot of women and no, it's not such a big deal to be talking openly about it.

Both heartbreaking and side-achingly funny, it shows the often unseen side of abortion such as lying on a couch and watching films whilst recovering from it or that even in your late 20s, you're still terrified of telling your mom in case she gets angry at you for choosing a termination or for getting knocked up in the first place. Perfection.

When Adam's new girlfriend Mimi Rose (Gillian Jacobs) casually declares that she can't go for a run because she "had an abortion yesterday", Adam is understandably horrified, launching into one of his incredibly typical outbursts against her. Mimi Rose remains calm throughout the tantrum (even after being called "evil") and attempts to diffuse the situation by explaining it in scientific terms. It was genderless. It was no bigger than a seed. It was a ball of cells.

What was amazing about this plot line was not only how casually it was dropped (some might think that level of cool callous, but I find it admirable) but also how it clearly pointed towards a practical, personal decision — a baby didn't fit into her life. And that's a decision only one person can make for herself.

And we come full circle back to Shondaland with Christina Yang's important abortion story. Though husband Owen wants to have children and wants for Christina to keep the baby, she does not, and informs him that she'll be having the abortion either way, with or without his support. This is incredibly empowering, not least of all because it stays true to her character. As Rhimes has said of the decision for Dr. Yang to go through with the procedure: "The idea that this woman would have a child that she did not want and resented for ruining her career and resented Owen for making her have [it] would have been hideous". And for a lot of us, the decision to have an abortion is absolutely as humane, practical and sensible as that.

Abortion remains a crucial talking point in society and in all likelihood it will always remain to be, but by showing positive portrayals of it in TV and film we can at least attempt to de-stigmatise it for women and also use to provide comfort and a sense of normality to the individuals who are faced with making this decision daily.