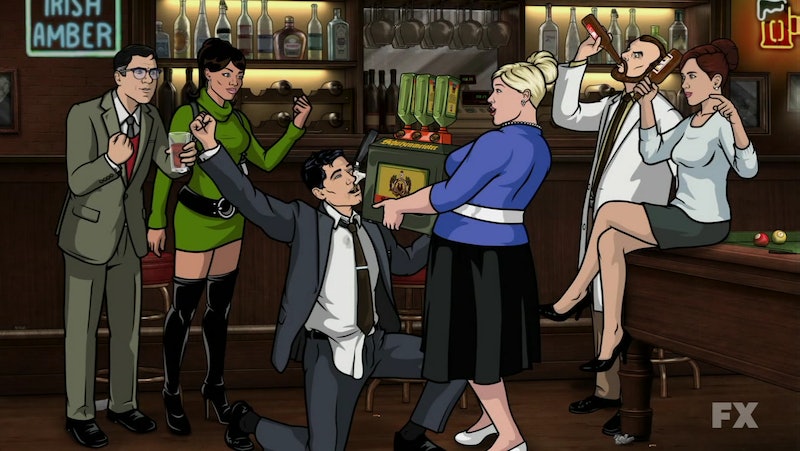 I know you're still recovering from the Golden Globes, but it's time take that shower, open up the curtains, and get last night's bag of M&M's off of the floor. Don't you know that's how you get ants?! Also, it's time to get stoked for a new season of Archer ! Monday night, Season 5 of the FX animated series will commence. For the unfamiliar: Archer is a not-for-kids cartoon that chronicles the misadventures of the employees at a spy agency. And for the Archer devotees: Is it just me, or does the return of the show have you experiencing a level of joy that could be rivaled only by the thought of holding the Wee Baby Seamus? (I don't care that he's an animated character. The Wee Baby Seamus is so cute. And I want to hold him.)

I am excited for Season 5 of Archer. Very excited. But rather than use my own words, I thought, Why not hand the mic over to Cheryl Tunt and Pam Poovey? Yes, Cheryl and Pam are two of ISIS's finest employees. But they're also amazing disasters who say whatever pops in their demented minds. And that's why they're perfect for the job. So, here are my thoughts, as executed by Cheryl and Pam.

What life is like in between seasons of Archer:

But hey! The show returns today.

How does THAT feel?

How shall we celebrate?

Let me try that again: How shall we celebrate?

Oh, you're not jazzed about tiger tranquilizers?

We're in this together...

...tiger tranqs and all.

The day after the Season 5 premiere will probably feel a little something like this:

But remember: No matter how hard the tiger tranqs hit you, there will always be therapy cranes.