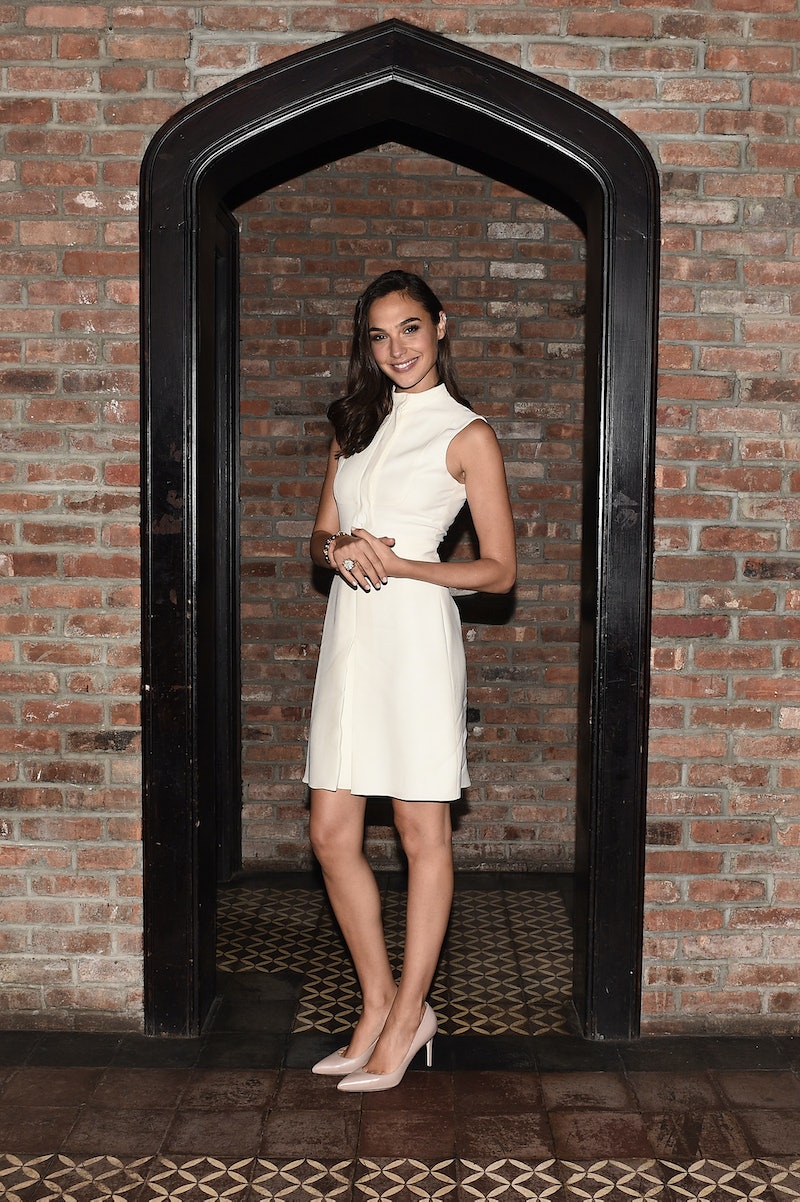 With all of the many, many superhero movies that have been made, it is still hard to believe the First Lady of superheroes, Wonder Woman, is just now getting her first movie. The historic significance of the 2017 Wonder Woman movie is not lost on star Gal Gadot, who took to Twitter to post an official Wonder Woman picture. Gadot's caption is perfect: "Almost 75 years in the making," she wrote. While fans will get their first glimpse of Wonder Woman in 2016's Batman vs. Superman , the Amazon Princess' solo outing has been a longtime coming for Wonder Woman devotees and superhero fans waiting for more female heroes to be brought to the big screen.

The first photo is promising. While the image itself is vague, it establishes a setting (London, thanks to Big Ben peaking out over Wonder Woman's shoulder) and most importantly, it isn't remotely sexualized. Wonder Woman is wearing a heavy cloak in the photo with only her trademark crown and golden bracelets acting as identifiers for the iconic character. It's the perfect way to introduce Wonder Woman. The photo instantly emphasizes her power, which is important since she is a goddess known for kicking all kinds of butt.

If you get goosebumps when you first see the image, don't be surprised. It took Hollywood way too long to get around to putting Wonder Woman front and center. Now that she is headlining her own movie and Warner Bros. has seemingly found the absolute best actress to bring Wonder Woman to life in Gadot, it is hard not to get giddy over seeing the Amazon Princess, Diana, looking larger than life.

Plot details for the movie are still being kept under wraps, but since production is now underway, there should be more and more news on the horizon. For now, in addition to the stunningly heroic photo, there was also a slew of new cast members announced. In addition to Gadot and Chris Pine — who is playing Wonder Woman's love interest Steve Trevor — Robin Wright, David Thewlis, Danny Huston, Ewen Bremner, Saïd Taghmaoui, Elena Anaya, and Lucy Davis have all joined the movie, according to Entertainment Weekly. Given how little information is known about the story, it is way too soon to make guesses on who the rest of the cast is playing. Although, if I were a betting woman, I would put money on comedic actress Davis (The Office U.K.) playing Diana's best friend Etta Candy.

I suspect whatever director Patty Jenkins has in store for Wonder Woman, it will be befitting of this landmark character who has been waiting way too long for her day on the big screen. The first image suggests Jenkins is keenly aware that fans want Wonder Woman to be handled with as much respect to her strength and heroism as her male counterparts have been given. As for Gadot, well, it was already clear she has nothing but the utmost admiration for the mighty shoes she has been asked to fill.