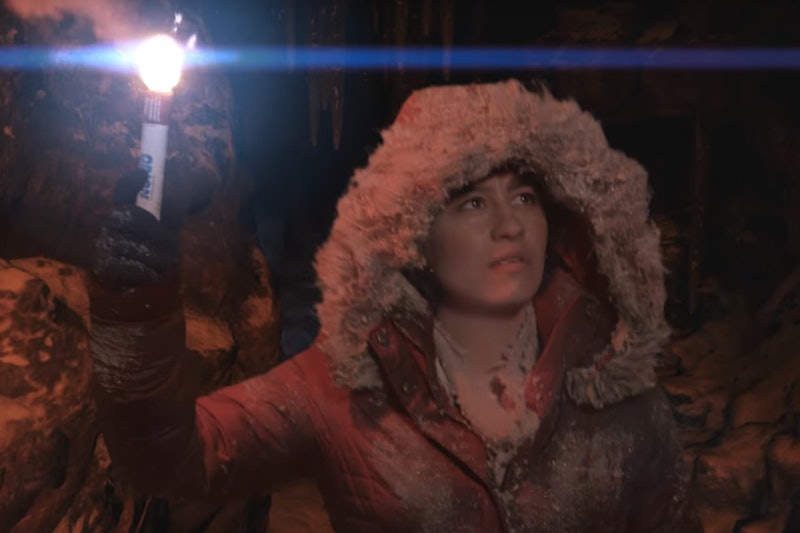 Everyone's favorite feminists from Broad City are pulling a Lara Croft in their latest video, and it couldn't have turned out any better. Season 3 of Broad City doesn't start until Feb. 17, 2016, so while fans wait for that slice of genius to manifest, I'm glad we can see Abbi Jacobson and Ilana Glazer keeping it real in some green screen action! Not only do they kick ass in an Xbox commercial that serves as a Tomb Raider parody posted by Comedy Central, but we also get a taste of their usual Broad City antics.

It's amazing news that Broad City is back for a new season soon, and seeing Glazer and Jacobson take on an icon like Lara Croft in a hilarious fashion is a real treat. Croft, in particular, is an interesting choice for two outspoken feminists, as the character recently underwent an image overhaul. Seeing Ilana Glazer take on the role of Croft, using a pickaxe to climb up the side of the mountain, is empowering, and of course hilarious, especially when we realise she's not on a mountain at all. Here are some the best moments from the ad.

1. Ilana Glazer Has A Flare!

Every awesome hero needs a flare, am I right? She looks every bit the adventurer, walking through a cave. It's full-on serious exploration time, yo!

2. Abbi Jacobson In A Blizzard

The pair emerge from the cave and are in the middle of an intense blizzard. Props for the snow effect there.

The video is called The Climb and this is why. Perfectly meshed with gameplay footage, Glazer climbs up the rock face with a giant pick axe. YES!

Keeping watch below, Jacobson spots something, and shouts out for Glazer to watch out and be careful. Besties have always got your back.

Glazer calls down to Jacobson that they're almost at their destination, which appears to be a dreamlike, mountaintop castle in the distance.

7. But They're Not Really On A Mountain, Are They?

It turns out that Abbi Jacobson and Ilana Glazer are actually hanging off of some scaffolding outside an apartment block. Of course they are. If I was in their situation, I'd feel like Lara Croft too, as what's scarier than a tall drop toward the sidewalk?

8. This Guy Is Shouting At Them

Glazer and Jacobson have managed to anger one of the neighbors who says he's going to call the police on them for trying to break into the building. But they're only trying to get back to their friend's party, cut them some slack.

They tell the guy that if he calls the cops on them, they will tell the police what he's doing up there in his room. Calling his bluff totally works. What is he doing up there?! Smooth move, ladies.

10. The Neighbor Backs Down

So, their real-life climb doesn't look very successful, but it's nice to know they have the same dreams we all do — just once, I'd love to be fearless like Lara Croft is, and climb a mountain/some scaffolding without any fear. Sure, it ain't ever gonna happen, but a girl can dream.

Watch the full commercial below.