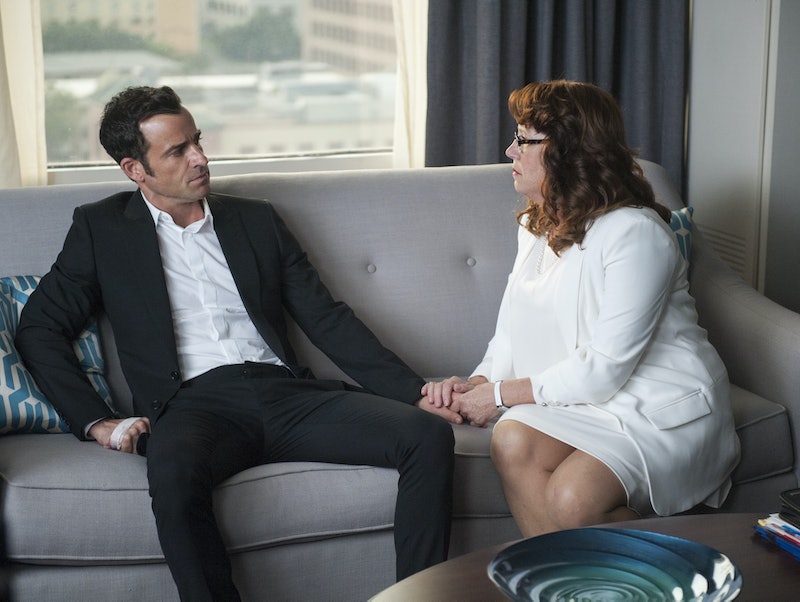 When I read that the title of this Sunday's episode of HBO's The Leftovers was "International Assassin," I wasn't quite sure what to expect — especially considering that last week's episode ended with the protagonist of the show, Kevin Garvey, seemingly dead on the floor of a dirty trailer in the woods. The press release was frustratingly vague: "In the wake of Kevin's desperate decision to vanquish Patti, questions and answers emerge as the world adjusts to the repercussions of what comes next." But whatever I was expecting, it certainly wasn't that.

After last week's jaw-dropping cliffhanger, the show didn't keep us wondering long about Kevin's fate. The very first shot of the hour showed the character alive and well... or was he? Waking up naked in a bathtub, it soon became clear that something about Kevin's surroundings were off. He was seemingly in a hotel of some sort, but things just kept getting weirder and weirder. The wardrobe, which bore an inscription ("Know first who you are, and then adorn yourself according," by the ancient Greek slave/philosopher Epictetus) contained four sets of clothing: a priest's garb, an all-white Guilty Remnant get-up, a police uniform, and a business suit. Kevin bypassed the outfit of his former profession in favor of the simple black suit — which apparently marked him as the titular "international assassin," as someone immediately burst into his room and tried to kill him.

After vanquishing his foe, Kevin ventured down to the lobby, where things just got weirder and weirder, including a fluttering bird trapped in the building and a young girl almost drowning in the deserted pool. Eventually Kevin meets the concierge: Virgil. The old man (who we last saw shooting himself through the mouth) told Kevin that in order to escape this purgatory, he would need to find — and kill — Patti, who was staying at the hotel during her campaign tour. (In this bizarro reality, "Senator Levin" is running for office.) After a bit of hazing from her Guilty Remnant security detail, which brings him in contact with both Gladys and Holy Wayne, Kevin is finally granted an audience with Senator Levin, who he promptly shoots dead.

When Kevin doesn't immediately wake up in the real world, he realizes something is wrong: the Patti he killed as an impostor. Through a crackling TV set, Kevin's dad manages to communicate to his son while apparently on some sort of vision quest in a cave in Australia. In order to escape, Kevin would now have to "take her to the well." Kevin realizes that the girl he saved from drowning earlier is actually Patti in a younger form. He abducts her from the hotel and drives her all the way to Jarden... where they're stopped on the bridge by a strange man we've never seen before. (Presumably the mystical man in Australia Season 2 has been dropping subtle but consistent hints about?) He offers Kevin a choice: kill himself right then or continue on his quest to kill Patti.

Kevin chooses the later, carrying young Patti to the well and pushing her in. But she doesn't die; instead, she merely transforms back into her normal self and begs for help. Kevin climbs down and listens while the former Guilty Remnant leader tells him a sad story about how she was once too afraid to leave her husband, even after going on Jeopardy to win enough money to survive without him. When she's done, Kevin briefly comforts her — before pushing her head under the water and drowning her. Immediately, the well is rocked by an earthquake and Kevin desperately struggles to climb his way out...

...Out of the ground in the middle of a forest, into the open air, gasping for breath. Michael Murphy is standing nearby. "Holy sh*t," the boy exclaims. "Holy sh*t," everyone watching echoes, as one of the most bizarre hours of television EVER draws to a close.

More like this
Dr. Anna Pou Is Still Practicing Medicine After Facing Murder Charges
By Brad Witter
'Children of the Underground' Subject Faye Yager Now Runs A North Carolina B&B
By Brad Witter
The 'Black Bird' Stars Are Both Heading Back To Apple TV+
By Brad Witter
Why 'Black Bird' Suspect Larry Hall Recanted His Jessica Roach Confession
By Brad Witter
Get Even More From Bustle — Sign Up For The Newsletter