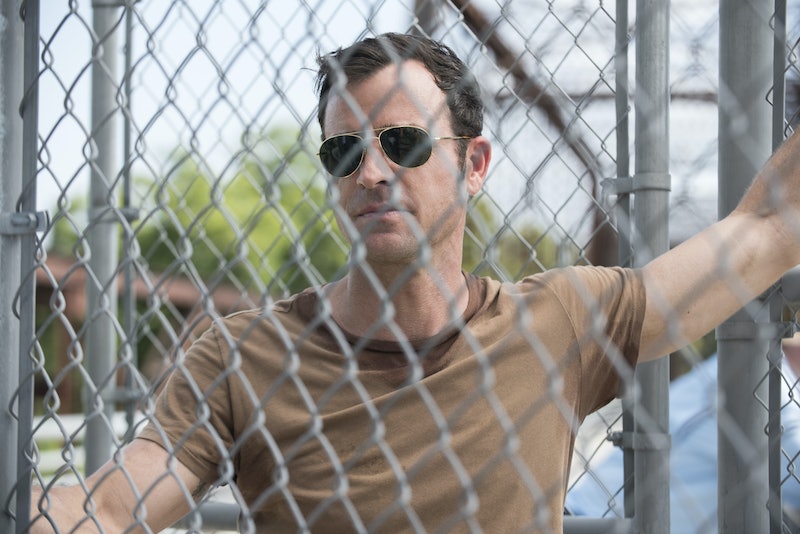 So... THAT just happened. If you watched this Sunday's episode of HBO's The Leftovers , you're probably still reeling from that doozy of a cliffhanger — perhaps the most shocking moment on television since the death of Jon Snow on Game Of Thrones last June. By all appearances, the show's protagonist, Kevin Garvey, is dead. If The Leftovers aired anywhere other than HBO, I would be severely questioning that fact; but this is a network that has already proven it's not shy about killing off main characters, so perhaps we really should start mourning the loss of Justin Theroux from our TV screens. But first, how exactly did we reach this unexpected twist?

After he confessed the truth about his Patti hallucinations to Nora at the end of last week's episode, it turned out that Nora took baby Lily and fled their home, refusing to return any of Kevin's calls or tell him where they went. Desperate to rid himself of Patti once and for all and return his life to some semblance of normalcy, Kevin took a drastic course of action. After being taken by Michael Murphy to visit Virgil in his trailer in the woods, Kevin learns of a possible remedy for his strange situation. Virgil tells him that, in order to vanquish the demon on his back, he'll have to die — at least temporarily.

In fact, this isn't the first time Virgil has told Kevin this. The old man reveals to Kevin that he visited his trailer once before: during Kevin's first night in Miracle. When Virgil told him he would have to die, Kevin apparently didn't hesitate to run out of the trailer, find a cinder block, tie it around his ankle, and throw himself in the lake. (Last week solved the mystery of Erika's bird box and this week solved the mystery of Kevin's cinder block, which means showrunners Damon Lindelof and Tom Perrotta must be in a fairly generous mood these days.)

Of course, all of this happened while Kevin was in the midst of a blackout, so he had no memory of it afterwards. Virgil points out that the water draining from the lake just as Kevin jumped in either means that A) there's a higher power trying to save his life, or B) he has "A Most Powerful Adversary" that wants to prevent Kevin from ridding himself of Patti for some nefarious reason. (Episode title alert!)

In his lucid state, Kevin initially balks at Virgil's proposal, fleeing the trailer — only to return at the end of the episode, determined to end things with Patti once and for all. Virgil offers Kevin a glass of poison to stop his heart. "Temporarily," he reassures. He then shows Kevin a syringe of epinephrine he'll inject him with to restart his heart. Patti tries a bit of reverse psychology on Kevin, telling him she wants him to do it. But when Kevin actually raises the poison to his lips, she screams at him to stop; he ignores her and chugs it down like a glass of lemonade. Kevin keels over, frothing at the mouth. Virgil takes the syringe... and squirts out the epinephrine. The old man takes out a gun, shoots himself through the mouth, and leaves Kevin convulsing on the floor of his trailer... until the convulsions finally stop and Kevin lays ominously still.

So, is Kevin really dead? It's hard to say. The episode ends with Michael, who came running at the sound of the gunshot, dragging Kevin's body out of the trailer. But even if Michael takes Kevin to a hospital — or to his doctor mother — Virgil made a point of telling Kevin earlier that he would only be able to be revived (without severe brain damage, at least) within a five-minute window. That's a pretty narrow margin to be operating under. If this were any other show, I would assume Kevin was going to survive. But this is The Leftovers we're talking about.

This show has no shortage of compelling characters: Nora Durst, Matt Jamison, Erika Murphy. Any of these characters would be capable of carrying the show even without Justin Theroux's befuddled (if beautiful) presence — which has already been far less central to The Leftovers this year than it was in Season 1. But I have to say, seeing Kevin shuffle off this mortal coil without a definitive solution to the Patti mystery — is she a hallucination, a ghost, or an angel? — would be a frustrating end to his character's arc.

Season 2 of The Leftovers has been surprisingly forthcoming when it comes to answers. Hopefully next Sunday's episode will continue that trend and resolve Kevin's fate one way or another, rather than keeping viewers hanging for another couple of weeks.