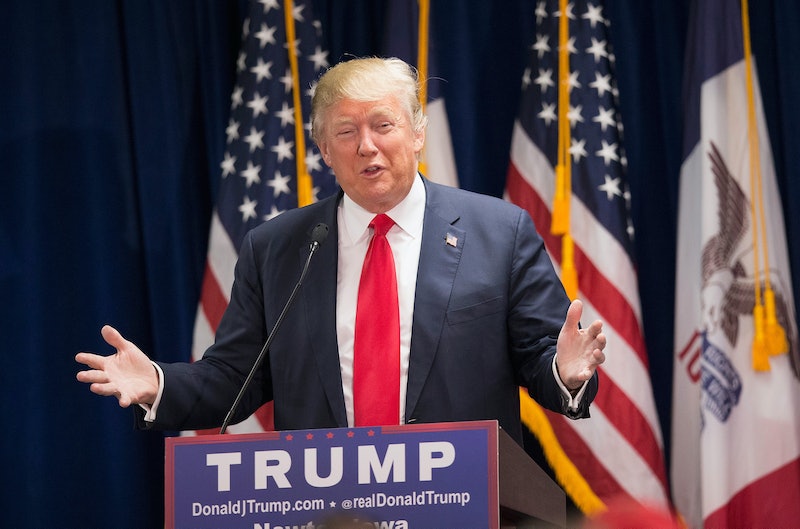 In an interview on ABC's This Week on Sunday morning, current GOP frontrunner Donald Trump hinted a run as an independent candidate for president if he doesn't win the Republican party's nomination next summer. Despite signing a loyalty pledge to the Republican National Committee promising support to the eventual nominee and not to run as a third-party candidate, Trump indicated to This Week host George Stephanopoulos that he may renege on his promise if he is not "treated fairly."

The interview was prompted by new ABC polling numbers that show Trump holding down 32 percent of voters, pulling much farther ahead of second-place Ben Carson, who received only 22 percent of support from registered Republican-leaning voters. That's a dead heat from ABC's last national poll, and a strong sign that Trump could clinch the nomination at the convention in July.

Party insiders and voters agree that it looks like Trump will get the nomination. ABC's poll reported 38 percent of voters see Trump having the best shot to win the presidency and 81 percent of Republican insiders feel the same way. "Predictions of his demise keep not coming true," one New Hampshire Republican told Politico in October. A South Carolina Republican added, "Donald Trump being the GOP nominee is now within the realm of possibility."

But Trump is still considering a contingency plan, even if it means ignoring his commitment to the GOP and tearing apart party unity. Ultimately, Trump can break his promise to the RNC without any concrete consequences. "It's unenforceable," said Carly Fiorina in a CNN interview in September. "It is, more than anything else, your word. And I would presume that somebody running for president would like to signal to the American people [...] that their word can be trusted."

The optics of breaking his pledge to the GOP might be a serious consideration for Trump's campaign. According to ABC's poll, Trump only has 23 percent of the "honest and trustworthy" vote, getting beat out by Carson by more than 10 points. Getting support for Trump as a third-party candidate would be a huge enough hurdle, but his current image problems would only compound without the legitimacy of the RNC behind him.

It might seem that Trump already has the nomination locked up, but realistically, it's eight months out from the Republican National Convention and the possibilities are limitless right now. Trump is already building support for himself as an independent candidate, so no matter what happens in July, he might not be done fighting for the presidency.