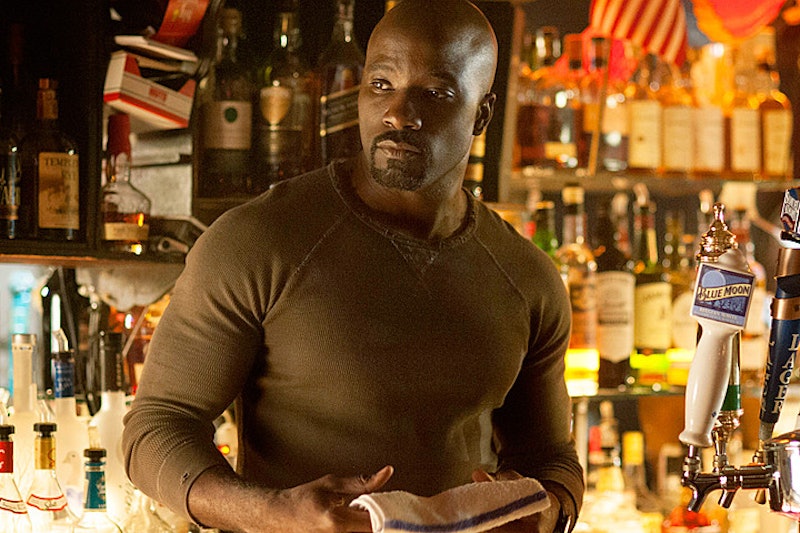 Move over Mary Jane and Spiderman, there is a new romance in the comic-book adaptation world and it is hot, steamy, super complicated, and the best thing on Netflix right now. Jessica Jones, the titular fast-talking investigator of the streaming site's newest show, has truly met her match with Luke Cage, the tall, dark, and handsome barkeep with secrets of his own. Since I am slowly becoming obsessed with this couple with every new episode of Jessica Jones I watch, I have been left with one extremely important question: How many episodes of Jessica Jones is Luke Cage in? I need to know what to expect, people.

From the moment Cage entered the Jessica Jones universe and invited our heroine into his bar for a drink, I was shipping this couple with the power of a thousand twitter hashtags. And when they hooked up in the very first episode, I knew this wasn't going to be a simple will-they-or-won't-they situation — this was gonna be way more complicated than that. Still, with the knowledge that Luke Cage is getting his own show on Netflix, I had to wonder how much a major character he could possibly be in Jessica Jones. Obviously, I hoped he'd be in all of the episodes, because, I mean, just look at him. And besides, he and Jessica are totally soul mates, and they need to be together as much as possible.

So if you have yet to complete the first 13-episode season of Jessica Jones and are as obsessed with Luca (their super-cute-if-not-making-total-sense couple name that I just came up with myself) as I am, I have got some great news for you. Luke Cage, played by Mike Colter, appears in a total of seven Jessica Jones episodes. Yay! The Netflix gods have listened to my prayers.

Cage appears in the first three episodes of the series, when the couple first begins their hookup relationship with undercurrents of something more. Soon, however, Jessica (played by Krysten Ritter) puts an ends to things. Because of this, Cage doesn't reappear until episode six, "AKA You're A Winner," which, let's be real, makes the entire audience winners. And thankfully, he returns to help Jessica save the day in the final three episodes of the first season. So question answered — there is ample Luke and Jessica time in the first season of Jessica Jones. Yay, Luca! (Stick with it, OK?)

And with Luke Cage's own show on the horizon and the duo set to team up in The Defenders miniseries, this amazing couple is destined for a lot more screen time.