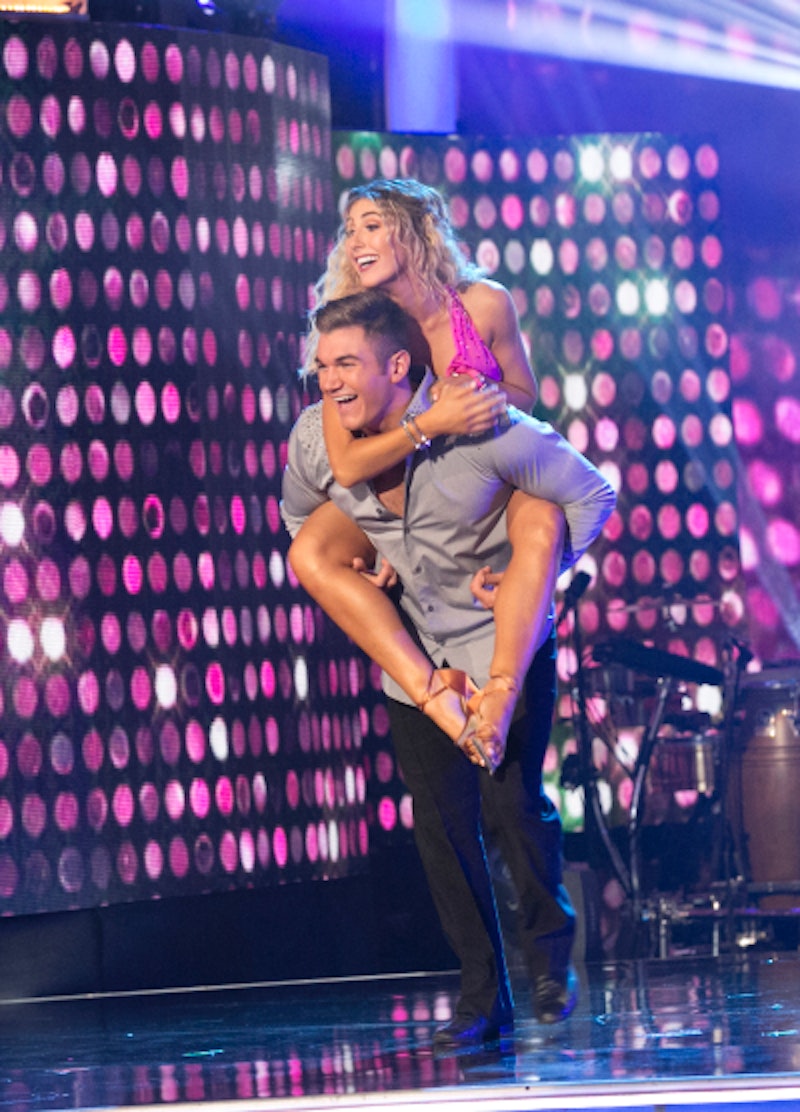 Season 21 of Dancing With The Stars is almost over, and there are only four couples left — Alek Skarlatos and Lindsay Arnold; Nick Carter and Sharna Burgess; Witney Carson and Carlos PenaVega; and Bindi Irwin and Derek Hough. But you know what? I don’t care about any of those couples (sorry, guys). The only couple I care about on Dancing With The Stars is Alek Skarlatos and Emma Slater. These two have an obvious flirtation going, even though they’ve repeatedly denied that anything is going on between them. Alek and Emma are relationship goals together because they are that cute. They’re not official and they’re still the best couple ever on Dancing With The Stars.

One could argue that their flirtation started all the way at the beginning of the season, but the flames could be pinpointed during the Dancing With The Stars Switch-Up week during which Emma and Alek danced a steamy rumba to James Bay’s “Let It Go.” It was pretty serious, and everyone who saw it knew that these two should take up baby making as soon as possible. Denial of a relationship aside, I have decided to make Emma and Alek’s unofficial union my new source of relationship goals because, yes, they are really that cute together. Here are some examples.

1. When Emma Broke Alek’s Nose & He Didn’t Get Mad

During that previously mentioned Switch-Up Week, Emma got a little overzealous with her elbows in rehearsal and slammed one of them into Alek’s nose. Maybe a little blood happened, sure, but certainly no anger came from Alek’s side. You know why? Because these two care so deeply for each other that he couldn’t get mad at her for smashing his face. True love means never having to say you’re sorry, people.

2. When Emma & Alek Did This Hot Dance Together

I know that a lot of Dancing With The Stars relationships happen because contestants and pros dance very closely together for many hours over many weeks. But in the case of Emma and Alek, these two didn’t dance together at all before this and had this amazing chemistry. Can you imagine what their performances would be like if they were dancing together all of the time?

3. When Alek Took Emma to Oregon

4. When Alek & Emma Played With Kids Together

If you’re in a relationship and it’s getting serious, you always think a little bit about kids. Will you have them? Does he want them? Will they be cute? Alek and Emma snapped a pic of them dancing with someone named Shiloh. I have no idea who Shiloh is, but I’ll be damned if Alek and Emma wouldn’t make cute parents together.

Apparently, all the men on Dancing With The Stars are as hairless as baby seals, so Alek needed to get his chest waxed before he danced his tango or samba or whatever. Again, he went along with it and let Emma inflict pain on him. What a guy, amirite? All for the good of the show,

See? Alek and Emma are doing relationships better than most people I know and they’re not even in a relationship officially. What are they waiting for? They’re already perfect.