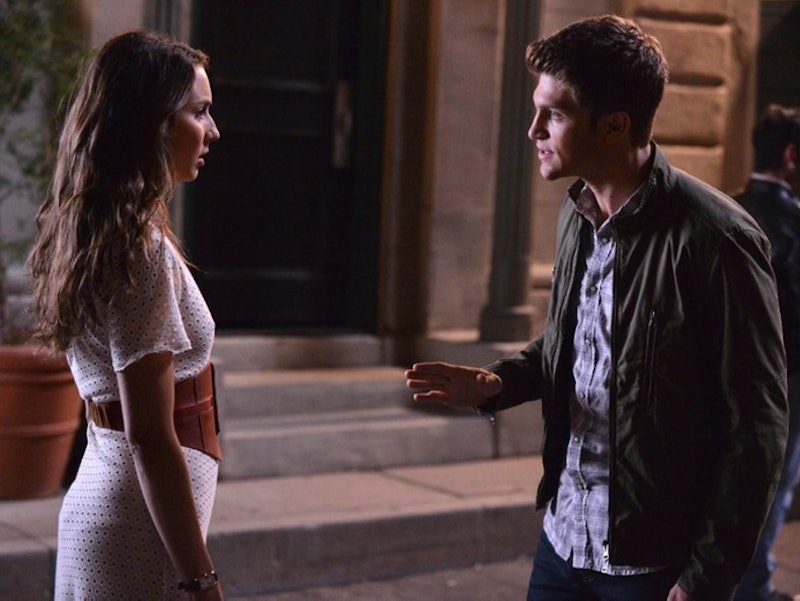 Now that the big A mystery has been wrapped up on Pretty Little Liars, it's time to turn to more important things. Like, following the five-year time jump into the future, who's still going to be a couple? While this notion might not take the forefront on the show, it is front and center in fans' hearts. For me, right at the top of the list of things to know about Pretty Little Liars Season 6B is whether Spencer and Toby are still together after the time jump.

Last we saw them, things were going OK. However, the next time we see them, in the "5 Years Forward" special, things will not be OK (at least not in our hearts). Troian Bellisario confirmed to E! Online that in the future, Spencer and Toby are no longer an item. Spoby is dead. It's fine if you need 10-20 minutes to cry about this, because it's a tough thing to process. One of PLL's original power couples calls it quits between the end of senior year and everyone's grand return to Rosewood. And if you forgot everything that happened to Spencer and Toby in Season 6A, check out the (drunk) recap video below.

Bellisario didn't elaborate as to why the two of them broke up, and judging from the promos for Season 6B, Spencer and Toby are still on speaking terms. They're even friendly with one another, making it look like the breakup is mutual and they're just as close. So besides apart, how are we going to find these two in the future?

Helping Out With The Hastings Campaign

The Season 6B promo shows that Spencer helps her mom with a political campaign, suggesting that she's got some sort of knew poli-sci knowledge. He might not be campaign manager like Spencer, but maybe Toby could be helping out in some other way. Organizing the campaign's volunteers? Helping with the website? Making snacks?

Toby got out of jail and went straight to carpentry, and then the police force. Correct me if I'm wrong, but did he even actually graduate high school? That's usually required to be a police officer IRL, but this is Rosewood, and with all of the A craziness, I honestly have no idea. Now would be the perfect time to go back and do that.

Spencer and Toby have a long history of helping the other out, and even broken up, I bet this still stands. Maybe with a little encouragement from Spencer, he got his diploma/GED, and is now enrolled at Hollis. He and Spencer could have strictly non-sexy study time.

Trying To Work Through Their Differences

No, I don't believe that Spencer and Toby will be apart forever. Though we might not see it right away, or even this season, I imagine that whatever happened between them to cause their breakup won't last forever. Like a lot of couples out there, the two might have simply needed time apart from one another to figure out what they really want in life, and in Pretty Little Liars Season 6B may be slowly working on getting back together (I hope).