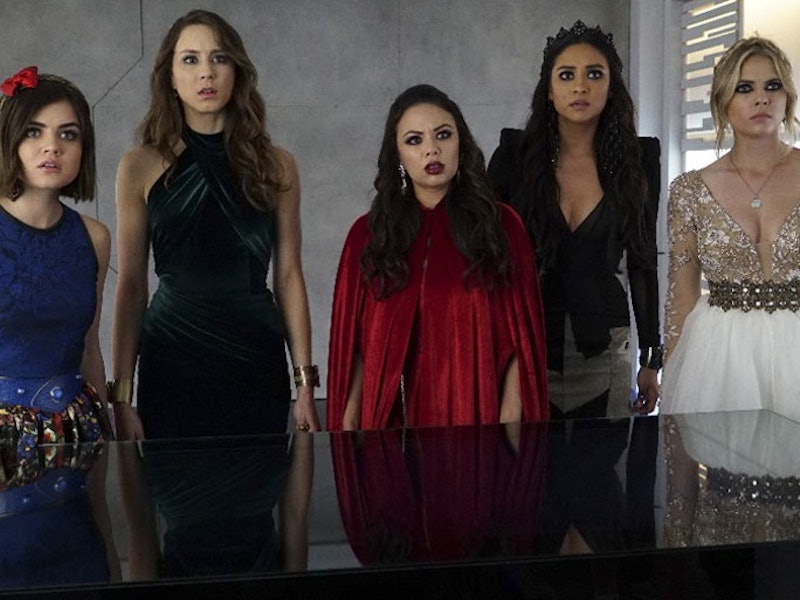 It feels like it's been an eternity since Pretty Little Liars Season 6A concluded in August. Although Season 6B doesn't officially kick off until January, we're getting a Pretty Little Liars " 5 Years Forward " special on Nov. 24 to tide us over, and I can't wait to see what Aria, Emily, Hanna, Spencer, and Ali have been up to in that time. I have my fingers crossed that the past few years have been kind to them — they certainly deserve it after all the trauma they endured during high school. In case you forgot exactly what that trauma entailed, let me recap Pretty Little Liars Season 6 so far, because a time jump into the future is no excuse to forget the details of the past.

Season 6A, aka the "Summer of Answers," proved to be the show's darkest installment yet. Although the Liars escaped from the Dollhouse in the season premiere, they still weren't free from A's grasp — or from the haunting memories of their time in captivity. Although the A mystery took front and center, showrunners did a great job depicting the variety of ways people process and cope with traumatic experiences. And, most importantly, the season showed that, despite A's cruel attempts to wreck their friendships, the bond between the girls cannot be broken.

We finally got many of our long-awaited answers in the summer finale — and some were more satisfying than others. But, a whole lot happened before then. Check out the drunk recap video below for an overview of PLL Season 6A, then read on for all of the details you need to prepare for 6B.

The Liars Escape The Dollhouse

After being held captive and psychologically tortured for three weeks, the Liars escape from the Dollhouse with the help of Ali, Caleb, and Ezra. Spencer has figured out that A is a DiLaurentis family member, but the police and everyone else are convinced it's Andrew Campbell. Desperate to put the ordeal in the past, Aria even tells police that she saw Andrew's face. The police interrogate him, but he has an alibi for both Sara and Mona's abductions. And, in case there was any doubt, the girls receive a threatening text from A while Andrew is in police custody — and we're officially back to square one. (Again.)

During the first moments of the season premiere, a sixth girl is shown in the Dollhouse. She's later identified as Sara Harvey and she's supposedly been held captive for two years. Emily recalls meeting with Sara's friend the previous summer — and she didn't have especially kind things to say about Sara. Nevertheless, Emily bonds with Sara and she moves in with the Fields. Many viewers were highly suspicious of her, and it turned out to be for good reason — in the summer finale, it was revealed that Sara is both Red Coat and Black Widow. It's still unclear how she became involved in the A game.

When questioned by Spencer, Jason recalls having a childhood "imaginary friend" who had to be "sent away." Meanwhile, Kenneth insists that there's no secret DiLaurentis. The girls comb through the family's home for clues, and find a photo of Mrs. DiLaurentis, Jason, Ali, and another child — the same one seen in the dollhouse home movie at the end of Season 5 — confirming, once again, that Kenneth is the biggest liar on this show. Jason and Ali confront their dad, who tells them that their sibling is dead.

Everyone is understandably skeptical about Kenneth's assertion — but the plot thickens when Spencer, Hanna, Ali, and Jason find a tombstone believed to belong to their sibling. It was clearly planted years ago, but many of us assumed this was simply part of A's master plan. An eerie birthday card sent to Kenneth confirms that his third child is still alive. For more on how the A mystery unraveled, check out Bustle's PLL podcast, Taking This One To The Grave.

The Moms Get Trapped In The DiLaurentis Basement

They had good intentions, but Veronica, Pam, Ella, and Ashley are officially the worst chaperones ever. After drinking a little too much Cabernet, Veronica gets the bright idea to ask Kenneth if he killed his wife. The other moms reluctantly follow her and they end up locked in the DiLaurentis' basement. The 6A finale totally forgot about them, so I really hope they've escaped.

A Is Finally Unmasked

After years of speculating, theorizing, and impatiently waiting, we finally learned A's true identity — Ali's sister, Charlotte DiLaurentis, who we knew previously as CeCe Drake. She reveals that she initially targeted the Liars because she felt they were happy about Ali's supposed "death," but then she became addicted to the game because she was so good at it.

We Finally Get Some Answers

Although A's identity was the most highly anticipated reveal, the Season 6A finale provided answers to a number of the show's ongoing mysteries. With so many people going around killing each other and casually burying one another alive, here's a quick refresher: Bethany Young, who was friends with Charlotte during their time at Radley, killed Toby's mom — then she was eventually hit with a shovel by Mona (who thought she was attacking Ali). Charlotte is the one who hit Ali on the head with a rock, but it was another terrible mix-up, because she believed she was attacking Bethany to protect their mother. (That yellow tank top caused so much confusion in Rosewood.) We already knew that Charlotte buried Mrs. DiLaurentis, but she only found her mother's body — the actual killer remains at large.

After what was arguably the most insane high school experience ever, the Liars say their goodbyes as they prepare to scatter across the country for college. Ali opts to stay in Rosewood and be there for her family.

A New Big Bad Is After Them

Five years in the future, Ali is teaching at Rosewood High and Aria, Emily, Hanna, and Spencer have returned to warn her that, "He's coming for you." And so our latest mystery has been introduced — and if A's identity was any indication, we're in for a long wait before we find out who "he" is and why he's targeting Ali.

Now that we've recapped the twists and turns of Season 6A, let's get excited for Pretty Little Liar's next big mystery.