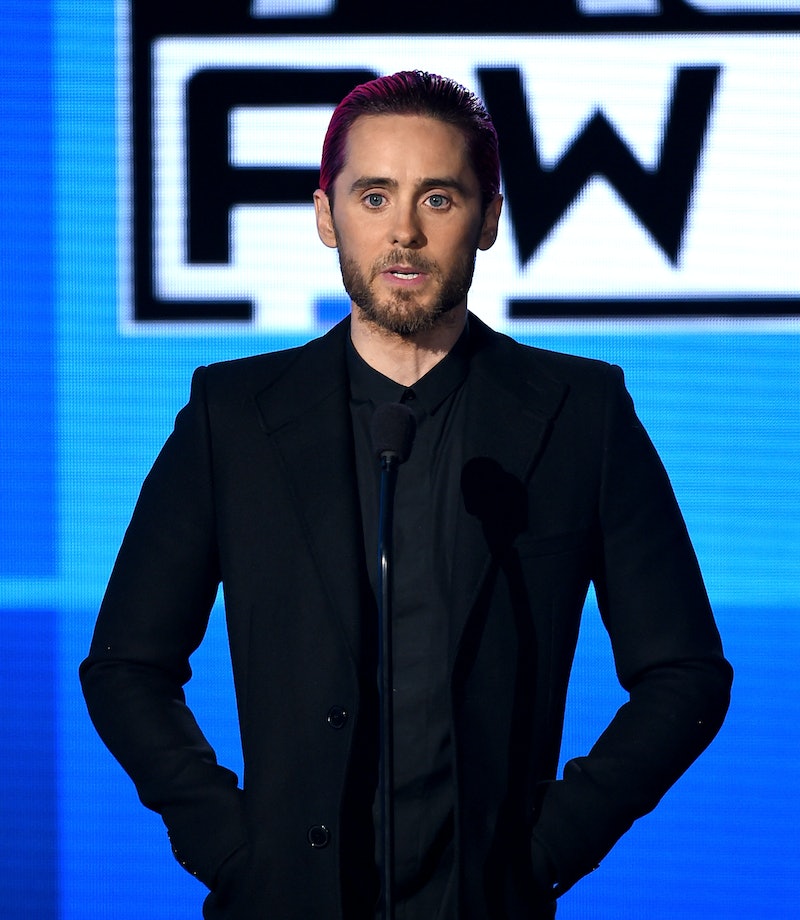 Sunday night's American Music Awards were mostly all fun and games, but they did get serious at one point. Jared Leto addressed the Paris attacks in his AMAs speech when introducing Celine Dion (who was there to sing a tribute song to the city), and it was beyond moving. The lengthy speech touched on everything from his own experience playing the Bataclan, to honoring those who lost their lives in the attacks, to stressing the importance of letting the Syrian refugees into America.

His words were clear, powerful, and evoked the response of compassion in the wake of such a horrific act of terrorism. As he pointed out in the speech when he paraphrased Antoine Leiris, the husband of an attack victim, it's easy to meet anger with even more anger, but that's not the way to recover from a situation like this. We need to come together and work to achieve peace. But, I'll let Leto speak for himself, because he put things better than I ever could. Below is the full transcript of his moving speech.

Earlier this year my band Thirty Seconds To Mars was wrapping up a tour to Europe and looking for a good excuse to stop off in one of our favorite cities in the world: Paris. We decided to play a little impromptu show at a classic venue called the Bataclan. It was beautiful, peaceful, and unforgettabe. What a difference a day makes. Seven months later on the evening of November 13, 2015, that same venue, Bataclan, was under siege, one in a series of terrorist attacks on Paris that changed the word forever. 129 innocent people died, 368 were injured, and another seven billion will forever be scarred by this horrific and senseless tragedy. Like some of you here, we had friends and former colleagues there that night. Steve Toth and Matt McJunkins both made it out. Thomas Ayed did not.

Antoine Leiris was also at Bataclan and said, "Friday night, you took an exceptional life. The love of my life, the mother of my son. But, you will not have my hatred" He went on to say, "You're asking for it, but responding with hatred and anger is falling victim to the same ignorance that has made you what you are. You want me to be scared, to view my countrymen with mistrust, to sacrifice my liberty for my security — you lost. We are just two now, my son and me. But we are stronger than all the armies in the world."

Tonight we honor the victims of the unimaginable violence that has taken place in this year in Paris and around the world. France matters, Russia matters, Syria matters, Mali matters, the Middle East matters, the United States matters, the entire world matters, and peace is possible.

By the way, many of us here are the sons and daughters of immigrants and Steve Jobs is the son of a Syrian immigrant, president Obama. The AMAs wanted to show its support to the people of France and the entire world. To that end they asked a woman who possesses one of the worlds great voices to perform an iconic song made famous by the legendary french artist Edith Piaf. Ladies and gentleman Celine Dion...