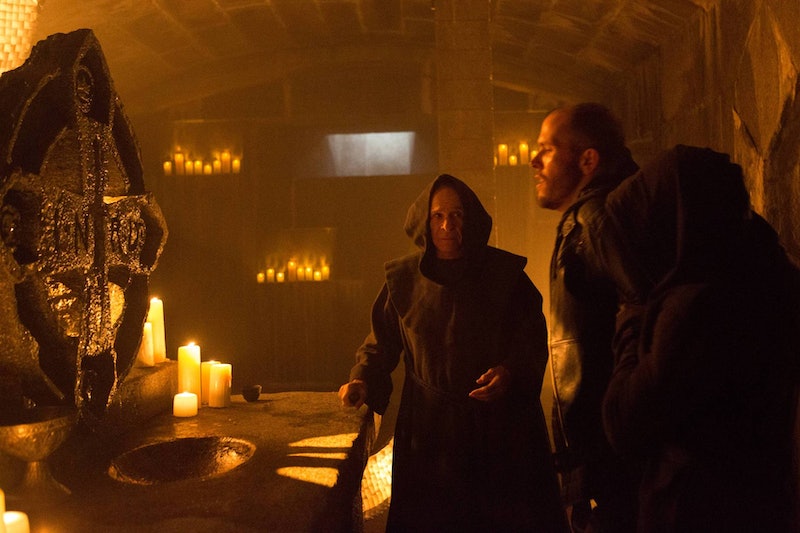 Over the course of Gotham's Season 2 Rise of the Villains storyline, Theo Galavan has become a major baddie, ascending to the role of mayor while secretly unleashing awful criminals (like Jerome) on the city, before being taken down by detective Jim Gordon. However, Galavan also has ties to an evil organization that aims to seek vengeance against the Wayne family by killing its only heir — yep, you guessed it — Bruce. So before Monday night's episode, "The Son of Gotham," we need to get to the bottom of this sinister group. Who or what is the Order of St. Dumas on Gotham ?

Earlier in Season 2, we learned about Galavan's centuries-old feud with the Waynes, revealing he was actually a Dumas descendent, one of Gotham's founding families. Centuries ago, a Wayne woman accused a Dumas man of assaulting her, though he claimed it was a consensual affair. In retaliation, the Waynes cut off the man's hand (remember that big knife Galavan was hell-bent on obtaining?) and forced the Dumas into a religious order. Now, Galavan is determined to eliminate the Waynes, killing their last remaining heir as a form of vengeance for what they did to his family, and last week, Father Creel brought his brothers to Gotham to help.

Before this, it had been speculated that Galavan and Father Creel could be connected to The Court of Owls, an ancient sect of political influencers in DC Comics that employed a league of powerful assassins known as Talons to manipulate Gotham City from the shadows. However, a new promo for "The Son of Gotham" specifically references the Order of St. Dumas, confirming that Father Creel and Galavan's "brothers" are members of the Order, rather than The Court of Owls. But, that still begs the question: Who are the Order?

In the comics, the Order of St. Dumas dates all the way back to the Crusades as a group broken off from the Knights Templar. However, it's unlikely that Gotham's version of the organization followed a similar path to creation, though they do seem to maintain the same devout religious fanaticism. In the clip from "The Son of Gotham," Gordon calls them "penitents. ... They believe in purification through pain — blood. They were big in the old days in Gotham." And, as if that description isn't creepy enough, the GCPD has discovered the Order plans to use the "blood of the nine" in a ritual to "wash away their sins." Yikes.

Given Galavan and Father Creel's ties to the Order of St. Dumas, it would seem this ritual of purification will also include killing Bruce Wayne (the final blood sacrifice perhaps?). But, with Detective Gordon on the case — and the simple fact that Gotham can't kill Batman! — I'm confident the Order of St. Dumas will be stopped before their ritual is complete. This season may be the Rise of the Villains, but it's won't be the Victory of the Villains.