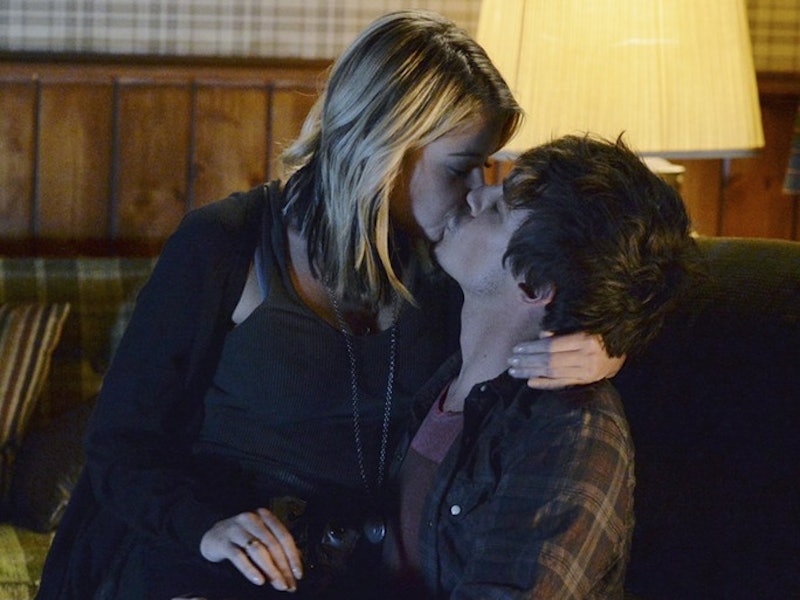 Being a Pretty Little Liars fan means that you're bound to suffer emotional devastation every once in a while. (OK, maybe more like all the time.) However, it seems as though Pretty Little Liars Season 6B is gearing up to be the most soul-crushing season to date because it will show us a world where Hanna and Caleb are no longer together after the five-year time jump. (If you need to ugly cry into your pillow for a moment, feel free. I'll wait.) That's right, folks — Team Haleb is dunzo (at least for now) and our beloved Hanna is engaged to another man, which we were all forced to witness firsthand in the most recent PLL Season 6 trailer. (We only caught a brief glimpse of him, but I can tell you already that he's no Caleb Rivers.)

But despite our own protests and temper tantrums, Ashley Benson (who plays Hanna) seems to be taking it all in stride. In fact, she recently admitted to TVLine that she's very much looking forward to this major plot twist in her character's love life. "I’m excited for her to have this new chapter in her life," she told the site. However, just because Hanna and Caleb aren't together now, doesn't mean that there won't be a reconciliation somewhere down the line.

Now that the gang has returned to Rosewood, there's a good chance that these two former lovebirds will be getting a lot of face time with each other, which could lead to past feelings coming to the surface. We don't know why the two of them decided to break things off, but I highly doubt it was because they just stopped loving each other. Haleb is an epic love and the show's No. 1 OTP couple, so that is simply not an option I will ever accept.

Perhaps after everything A put them through, Hanna's PTSD made it hard for her to be around anyone associated with those traumatic events. Or maybe Hanna's fashion career came with a lot of traveling and made them grow apart. It's hard to say right now what could've happened to make this solid relationship come to an end without really knowing any details. But I have to believe that there are still feelings there between them, which are sure to get re-explored once they face-off against this new opposing threat.

Plus, whoever this new guy is, I doubt he shares the same unique bond that Hanna had with Caleb. They went through so much together and understand things about each other in a way that no new love interest ever could. So if/when Hanna finds herself in danger again (and let's face it, it's bound to happen), she knows that she can count on Caleb to do everything he can to help rescue her. And there's nothing like a near-death experience to help bring two people back together again. So although things may look pretty bleak right now, I wouldn't give up on Haleb just yet.

And for more PLL theories, check out Bustle's podcast below and get pumped for Season 6!