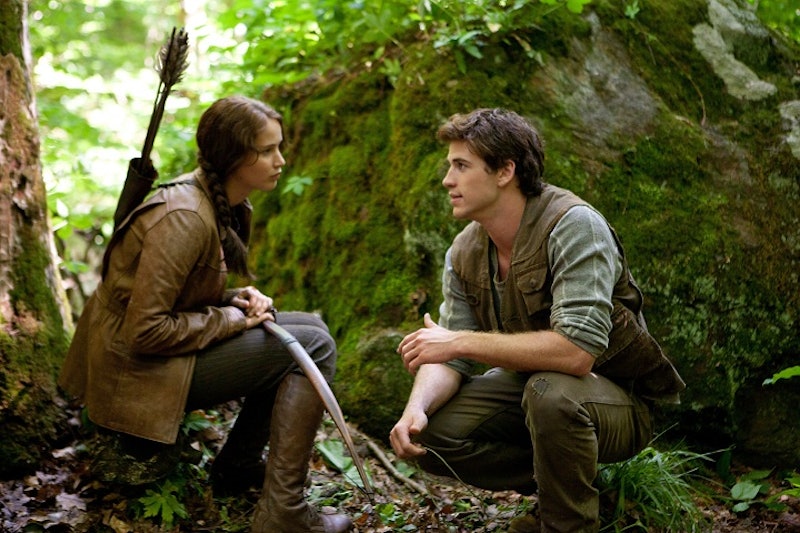 With the book series finished and the final installment of The Hunger Games: Mockingjay, Part 2 now in theaters, there sadly isn't any more Hunger Games material for us fans to work with. So what comes next for a Mockingjay to do? Write fanfic — or at the very least, discuss alternate ways for how Mockingjay, Part 2 ends. Talking about different conclusions for the series is a therapeutic way of handling whatever disgruntled feelings one may have about the ending being less than ideal; on the other hand, talking about alternate Hunger Games endings is a fantastic way to babble on for hours post-Mockingjay, Part 2 excitement — a way to keep the franchise from living on, whether amongst your own friend circles or on forums online.

Now, I’ve been around the web for awhile and I’ve seen the best (and worst) Hunger Games fan material there is. But one thing that has continued to amaze me by far is the amount of creativity that fans have been able to showcase in creating really outstanding fanworks and theories. And sure, they may not be canon, but they do make you think. So without further ado, here are five alternative endings for Mockingjay guaranteed to leave you with all the thoughts (and feels).

1. An Ending Where #TeamGale Prevails

Even as a #TeamPeeta sort of gal, I can't deny that this fanfic where Kantiss choses Gale over Peeta is super romantic. Here's a snippet of what this story by Blogspot user Inside The Imaginarium entails:

But the idea of having this moment back with Gale as though it were that day of the reaping where Gale had asked me to run away with him before my first Hunger Games makes everything feel perfect again. I move in to lean on him but he flinches with signs of pain and I notice he is hurt. He stares into my eyes searching for answers. Searching for the truth about how I feel although it was usually always so easy for him to read me. Back in the days of hunting, I could never hide anything from Gale.

2. An Ending Where Katniss And Peeta Are Dead

Talk about dark. It's hard to image the Hunger Games franchise as it is now without Katniss or Peeta. But I'd imagine that with their shocking deaths from suicide so early on, as told by Tumblr user Tearsarecool, the rebellion that took down President Snow and his tyrannical rule would have happened sooner. And who knows — maybe Prim would have stepped up in her deceased sister's place to become the Mockingjay.

"I would have liked it to return to where it all started, the attempted suicide in the first games. Except peeta and katniss would be successful . It’s not cheery or nice, but I believe this would create a bigger impact the reader. But I wasn’t disappointed with the way the past was summed up at the end, it really hit hard and was effective. “there are much worse games to play”

3. An Ending Where Katniss Becomes The President Of Panem

I don't know why I've never considered this type of ending before, but this fanfic makes it seem like totally plausible. Whether or not Katniss isn't too emotionally and physically exhausted to take on ruling an entire nation is a debate for another day. Here's a snippet from this well thought-out alternate ending by Wordpress user Mockingjayrethink, told from Katniss' perspective:

And so I stand, beside Acting President Paylor, as she announces the formal end of her temporary government and gives all the rights and duties of the presidency of the thirteen districts of Panem to me.

And as I stand, all eyes on me, I experience a slight separation from the present. I am there, but I am also elsewhere, at the reaping, surprising myself by standing up to take Prim’s place. Keeping my little family, my little sister, alive seemed so important then that it was worth dying for. Now, here, keeping my nation alive is so important that it is worth living for.

4. An Ending Where Everlark Do The Nasty

You read that right. Many fans wanted to see Katniss and Peeta make their love official through physical means, according to director Francis Lawrence in a recent interview with the Los Angeles Times. He said in response to a question asking if there was ever anything fans wanted that he refused to put in the film,

"There are definitely ideas that they come up with that we don't want to do. The 'everlark' sex. Where they want Katniss and Peeta to have sex at the end of the movie, have a sex scene. There was no shooting that. These just aren't sexual movies. The romance itself too, nobody actually has time to truly think about romance. It's all sort of situational. It's about comfort and trauma. She's not pining over boys. It's not like Twilight. That was all about abstinence and wanting somebody so badly. I get it in stories like that; in this, it just didn't make sense."

And while Lawrence wasn't down for Everlark sex ever becoming a reality, the idea of an alternate ending where the couple make love on screen is now a thought that will probably haunt and/or scar you for the rest of your life.

5. An Ending That Pays Tribute To The Dead

This fanfic provided a great bittersweet touch that utilizes a mix of the author's own writing with writing from the original Mockingjay text. Check out a snippet of the story, by Blogspot user SherileeStory, below:

“I would also like to present to the nation our first national monument and memorial.” Paylor walks me over to a towering veiled monument. “Katniss, you may do the honors.” I tug at the golden silk to unveil a golden statue of a mockingjay taking flight clasping an evening primrose in its beak. The statue rests on a tall plaque with the names of those who died defending peace. “May you take a moment of silence to read the names of your loved ones, never to be forgotten for their valor and honor.”The tv screen rests on the long list of names for several minutes. I find the names of the dead. Cinna. Boggs. Finnick. Prim. Tears spring to my eyes. Peeta’s family. The players of the last 75 Hunger Games. The list goes on.Paylor wipes tears from her eyes and continues. “Would all the guests of honor please rise.”

For the record, my favorite alternative fan ending is definitely the one where Katniss ends up runnin' the world — literally. I can see it now: Mockingjay, Part 2, not closing out with sweet Everlark, but with Katniss announcing her benevolent rule to the citizens of Panem, the ultra-feminist Beyoncè beat blasting in the background. Cue the obligatory mic drop.