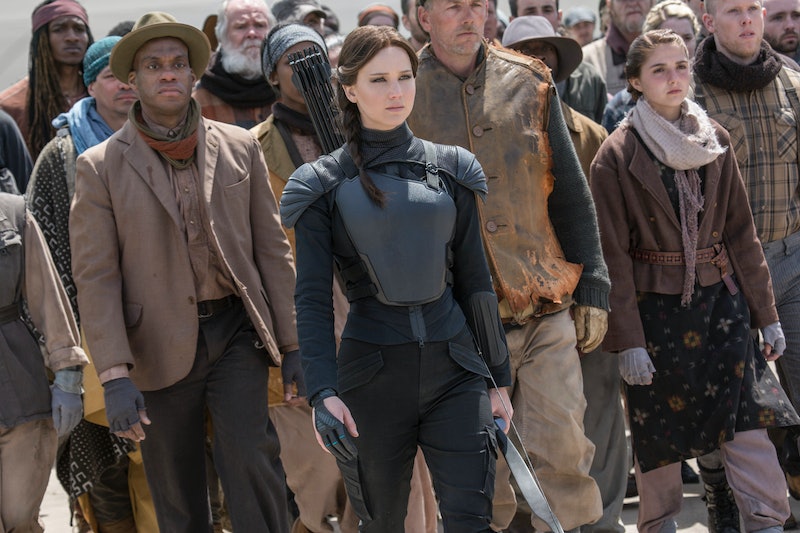 When The Hunger Games hit bookshelves and Kindles around the world, it immediately became the book to read. Even though it was targeted to young adults, practically everyone read — and loved — it, as well as its followups. From high school cafeterias to office water coolers Suzanne Collins' dystopian series was a topic of conversation for a long while, and when the movie adaptations happened, the world pretty much lost its mind. The Hunger Games became a pop cultural phenomenon and made Jennifer Lawrence a household name... and, eventually, a pop music star. Lawrence is featured on several tracklists, with her latest song for the franchise, with the Mockingjay, Part 2 soundtrack having "Deep in the Meadow," J.Law's latest track, on the tracklist.

The actress has shown her singing talents off before. On the Mockingjay, Part 1 soundtrack, Lawrence sang "The Hanging Tree", a song that played an important role in the story. The world must have loved her singing voice as much as her acting, because the song debuted on the Billboard Hot 100. But that wasn't the first time we heard Lawrence sing in the HG franchise. In the first movie, she tearfully sang a few lyrics to a lullaby titled "Deep in the Meadow" during Rue's death, a pivotal and heartbreaking scene. The song returns in the latest movie, in an extended version featured on the soundtrack.

It's great to see Lawrence show off her vocal skills once more, but if you're looking forward to hearing her sing some verses of the song during Mockingjay, Part 2, you'll be waiting a long time. The song doesn't appear during the movie. There's way too much going on for Katniss to have a singing break. However, the song can be heard during the end credits of Mockingjay Part 2 — and yes, it is actually Lawrence singing, even though she doesn't like doing it. The actress has spoken about her fear of singing and how bad she is at it many times (yeah, OK).

Apparently, the terror hasn't gone away over time, as in an interview with Vanity Fair, director Francis Lawrence said that during "The Hanging Tree" scene, J.Law "was horrified to sing" and that she even cried a bit in the morning before they shot the scene. She obviously mustered up the courage to belt out the tune and must have been faking her terrible singing voice, because everyone loved her rendition of the song. It was so good that club remixes were made of it, and people were dancing to it all over the country.

History might repeat itself with Lawrence's "Deep In the Meadow", but I can't really imagine it being a fist-bumping club banger, considering it is a lullaby. Plus, the song is mostly associated with the death of Rue, and I hardly think people would want to jump around and dance with that in mind. The song is grouped together in a suite of music on the last track on the Mockingjay, Part 2 soundtrack.

You may not be able to get your groove on to "Deep in the Meadow," but Lawrence's soothing singing voice is the perfect way to rock yourself to sleep at night.