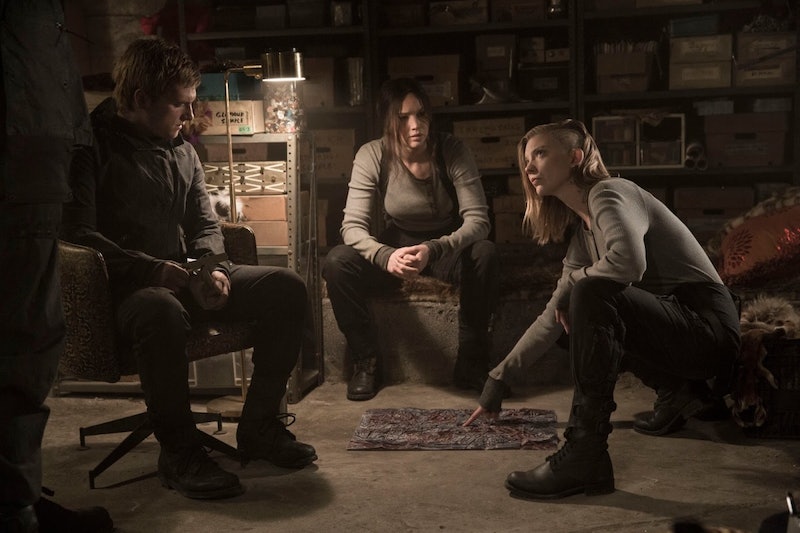 With the final novel in The Hunger Games series split up into two separate films, the majority of the action fell to the second chapter of Mockingjay. And what's an action epic with life-or-death consequences without an iconic soundtrack? In Mockingjay, Part 2, Katniss and Squad 451's advance into the Capitol is made all the more dramatic by the booming score. The right music ups the emotional impact of any given scene, whether it's an explosive booby trap attack on the rebels or a somber conversation between Katniss and a recovering Peeta. Music is of crucial importance to all The Hunger Games movies, including the last. So, what's on the Mockingjay, Part 2 soundtrack, and what should you expect from the songs?

It's a huge difference from the tracklist given to Mockingjay, Part 1. That movie's companion soundtrack was famously curated by then 18-year-old Kiwi pop phenomenon Lorde, a perfect match stylistically for the film. She put together a Panem mixtape featuring futuristic electro-pop from artists like Tove Lo, Bat For Lashes, and CHVCHES. Lorde's own "Yellow Flicker Beat" was released as the soundtrack's lead single and earned the singer a Golden Globe nomination for Best Original Song. The album also included one composition from the movie's actual score. The final track is Jennifer Lawrence's vocal performance of composer James Newton Howard's "The Hanging Tree," which also appears on the Mockingjay, Part 1 score album.

The Hunger Games and Catching Fire boasted star-studded compilation albums too. Remember Taylor Swift's collaboration with The Civil Wars circa the first movie and Lorde's "Everybody Wants To Rule The World" cover from the second? In fact, Mockingjay, Part 2 is the only Hunger Games film not to have a pop companion album. I admit that I'm disappointed, since it was the last chance to build a thematic compilation around Katniss Everdeen and the districts' uprising. I'm the kind of movie fan who uses music to stay in the world of of a film. Still, Mockingjay, Part 2 hasn't left me hanging entirely.

On Nov 23, Lionsgate released an album that features James Newton Howard's Mockingjay, Part 2 score. It's available on iTunes for $14.99 and consists of 19 individual tracks and a digital booklet. The Editor's Notes preview the symphonic score.

Acclaimed composer James Newton Howard (The Dark Knight, Michael Clayton) brings us back to Panem for Hunger Games: Mockingjay, Pt. 2. Howard’s score is an immersive combination of arrangements both panoramic (the brassy bombast of “Rebels Attack”) and intimate (the spare and haunting, violin-led “Your Favorite Color Is Green”) that culminates with Jennifer Lawrence’s gorgeous rendition of “Deep In The Meadow.”

You read that correctly. The album is almost entirely instrumental, with one notable exception. "There Are Worse Games To Play/Deep In The Meadow/The Hunger Games Suite" is a nearly 10 minute medley that's listed as featuring Jennifer Lawrence. The first part of the song's title clearly refers to the movie's epilogue and Katniss's quiet talk with one of her children. The other two pieces of music play over the Mockingjay, Part 2 credits, including a full vocal version of the lullaby that Katniss sings to Rue way back in the first film. Previously, "Deep In The Meadow" had only been released as a hidden track on The Hunger Games soundtrack in a version by Sting, so this album finally gives fans the chance to cry to Lawrence's performance over and over again. Each song can be individually downloaded for $1.29, so you can spring for that one on its own if money is tight.

There's plenty to love on the Mockingjay, Part 2 soundtrack, even if pop and indie artists weren't invited to the party this time around.