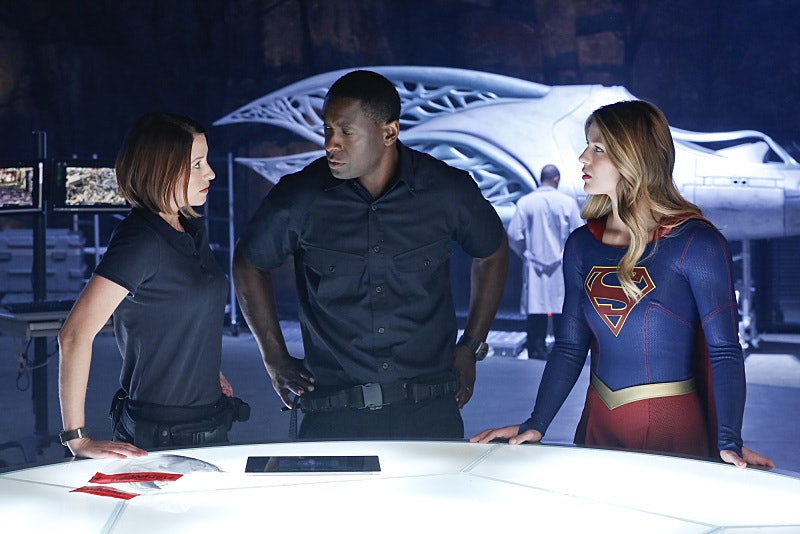 We're only a few episodes in, but Supergirl has already seen plenty of family drama, both in the form of Kara Zor-El's evil Aunt Astra, and within her foster family, the Danvers. Last week, it was revealed that the DEO is connected to the death of Kara's foster father, covering up the circumstances in which he supposedly died. This revelation, coming from Kara and Alex's mother, Eliza Danvers, causes the sisters to wonder what really happened to their father, and begin their own investigation into his mysterious death. But, is Jeremiah Danvers really dead on Supergirl, or could the DEO be covering for something else?

In last week's episode, "Livewire," Eliza explained that Jeremiah offered up himself as a resource to Hank Henshaw, in exchange for the DEO leaving the then-teenaged Kara alone. The DEO has since become a major part of both Alex and Kara's lives, since they both work for Henshaw, helping him track down aliens and protect humans from those with evil intentions. However, the mystery of their father's death impacts this working relationship, and in the Nov. 30 episode "Red Faced," Alex will employ the help of Winn (the CatCo IT guy who's crushing hard on Kara) to delve into the DEO's involvement. While we wait to hopefully learn more about Jeremiah's fate, here are three theories for what really happened to him.

Maybe the DEO is telling the truth — at least in that Jeremiah is actually dead. There's still the question of the mysterious circumstances that caused Kara and Alex's father's death, and why the DEO felt the need to cover it up by telling Eliza it happened during a plane crash. I hope Supergirl didn't cast Dean Cain (who has played Superman before in The Adventures of Lois & Clark) as Jeremiah just to kill him off, but I suppose he could potentially live on in flashbacks. Still, since the DEO was less than forthcoming about the circumstances of Jeremiah's death, it's totally possible he's not dead at all.

Maybe there was an accident, but Jeremiah didn't die, he's just missing. Since we don't know the nature of the accident, or whether there was one at all, it's possible he simply escaped the DEO and stayed away from his family to keep them safe. However, this theory opens up a whole other line of questioning, like where has Jeremiah been if he was missing?

The last option, if Jeremiah isn't dead or missing, is that he's still in the DEO. We don't know what his research entailed or what work he did for the organization, but he could have proved himself to be such a great asset that they couldn't let him go. Then maybe the organization simply told Eliza he died to prevent her, Alex, or Kara from ever trying to find him. Since we know the DEO and Henshaw are incredibly shady — and don't mind taking a 13-year-old alien girl from her adoptive family — it's entirely possible they've taken Jeremiah as their prisoner.

With Jeremiah's work for the DEO and fate being shrouded in such mystery, this is one case that may take Kara, Alex, Winn, and everyone else a whole season of Supergirl to crack.