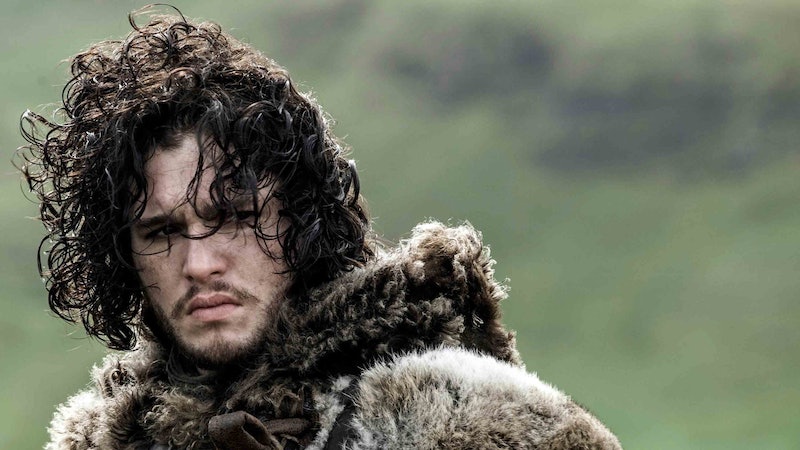 Y’all, you’ve never seen a party like a Game of Thrones party, because a Game of Thrones party don’t stop! And, if you want proof of this very fact, take a gander at the ol’ Twittesphere these days. You'll see exactly what I mean. Because when the poster for Season 6 of Game of Thrones dropped for the first time (on Twitter, no less), the fans went wild. Like spring break kind of wild, but with way more snow. Jon Snow, that is. Because the poster seems to clearly feature Jon Snow in its glossy image. You know, the character who supposedly died at the end of Season 5 and who, ever since, fans have been theorizing is not in fact dead, or, if he is, that he will be somehow resurrected.

Whether or not the poster means that Jon Snow is definitely alive has yet to be seen — according to the poster, we’ll have to wait until April to find out — but that hasn’t stopped fans from going to town in their celebrations, throwing around emojis and all-caps tweets as if they have lost their freaking minds. And who could blame them?

I mean, just look at some of these amazing tweets that were sent in minutes after the poster was released. They give fandom a new kind of definition, because, thanks to these feverish fans, “Jon Snow” was quickly trending.

Before the poster was tweeted by HBO, it debuted in Times Square in New York City. In other words, this is officially the first time in history that you would have actually wanted to be in Times Square. Definitely a history maker.

And then the GIFs started rolling in, and they were glorious.

If by trolling you mean messing with us on the regular and tweeting in all caps about feminism being a lie then... kinda?

Listen, I want Jon Snow to be alive just as much as the next girl, but is it masochistic that I delight in the idea of HBO totally messing with us?

Mood. For the last five months.

Of course, this GIF misses the part where I then go eat the chocolates off of the floor.

The line has been drawn. You're either with him or against him, folks.

So, no. That sound you hear is not the beating of Jon Snow's heart come back to life. It’s the sound of millions of fans everywhere, tweeting their hearts out, beating furiously against their keyboards as HBO messes even harder with their hearts.