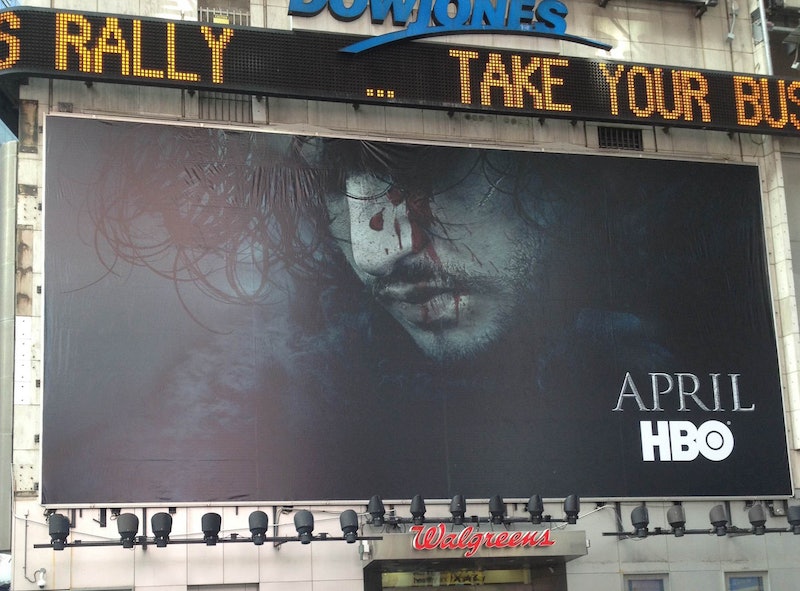 Hold onto your broadaxes and long swords, my friends, because the new poster for Season 6 of Game of Thrones just dropped, and it’s making some major waves in the world of television. Jon Snow, the beloved and revered character who supposedly dies at the end of Season 5, is seen gracing the glossy poster with his image. Smart move by the show’s execs, because Jon Snow’s death has been the talk of the HBO town ever since his character was killed off. And just as fans were coming to terms with his death, a ton of resurrection and conspiracy theories were born that argued for the fact that Jon Snow was, in fact, very much alive. Hey, in a world where people can be resurrected by flames and blood, I wouldn’t be surprised if the guy made a comeback either. But does the poster show an alive Jon Snow, or is it just a bloodied version of his corpse? And, more importantly, does this poster prove beyond a shadow of a doubt that Jon Snow is actually alive?

The problem with the poster, in my opinion, is how gray the guy looks. Granted, the coloring is consistent Snow’s when he was alive, and the darker cinematography fits with the images that are often featured on the show, but there’s no pink in that guy’s cheeks to signal life. (Also, GoT isn't exactly known for posting the most lively-looking characters, so keep that in mind.) The only color on him, in fact, is the stark red of the blood streaked across his face. So while it’s definitely Jon Snow on the poster, I think there’s still the smallest shred of possibility that the creators of the show are giving us a false sense of hope just to mess with us and that our worst fears have come true: That Jon Snow is really dead, and that the only way he’ll be coming back to the show is in flashback.

But let’s be real, whether Jon Snow is alive or dead, we’re all going to be tuning in to the new season in April anyway, because no matter how the art department over at HBO feels like messing with Game of Thrones fans, the pure-hearted among us believe that Jon Snow will return, whether it’s been proven beyond a shadow of a doubt or not.