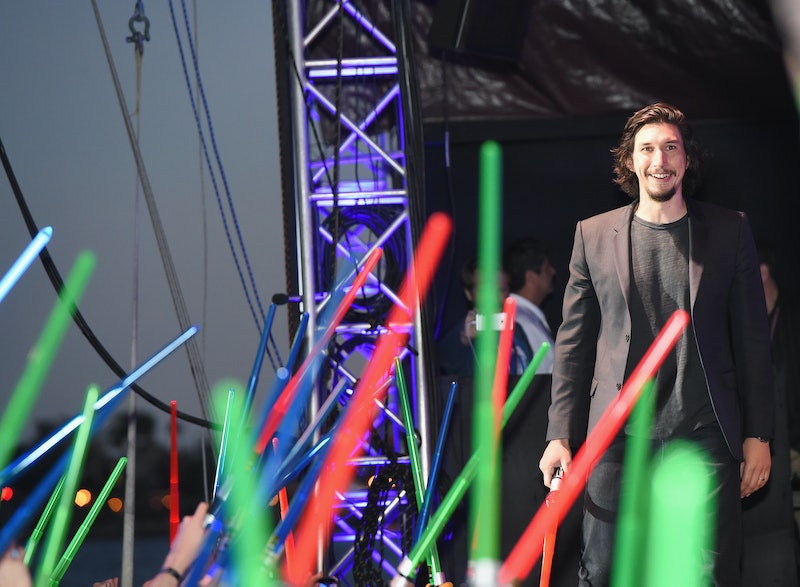 There’s a new Star Wars film less than one month away from my eyeballs, and I need to pinch myself daily to confirm that this is not some wonderful sci-fi geek dream. Star Wars: The Force Awakens has been the subject of breathless and eagle-eyed fan and press scrutiny since the sequel series was announced. Every detail has made worldwide news, particularly in regards to the creative team and the cast. A big-budget epic with a legendary history requires a large and diverse ensemble (plus a few cute droids), and that’s what The Force Awakens got. Girls star Adam Driver is one of the better known actors making his first appearance in film’s next trip to a galaxy far, far away. Driver plays Kylo Ren, a tall and dark baddie reminiscent of another iconic Star Wars villain. But who is Kylo Ren in The Force Awakens , exactly, and what will Star Wars fans need to know?

Obviously any movie with this kind of a pop culture cache and such a massive box office earning potential is going to be well-guarded by the people in charge. Approved stills, trailers, and TV spots are slowly but surely being fed out to the public, but there are so more mysteries left for the movie to solve. Driver’s character cuts an imposing figure in the trailer and has been the subject of lots of fan speculation as to who he is and what classic series characters he might be connected to. From the little approved information that’s made it past Walt Disney and Lucasfilm security, here’s what you need to know about Kylo Ren.

No room for discussion here. "Kylo Ren is not a Sith," director J.J. Abrams confirmed to Empire magazine, referring to the order of Dark Side power-seekers that includes both Darth Vader and The Phantom Menace's Darth Maul. The Sith have controlled the bad guy squad for six movies already; it's time for some new blood.

"He works under Supreme Leader Snoke, who is a powerful figure on the Dark Side of the Force," Abrams also told Empire about Ren's ties to the Empire off-shoot known as The First Order. Snoke is a motion-capture character portrayed by creature expert Andy Serkis, though his exact plans remain unknown.

2. He's A Knight Of Ren, Whatever That Means

Kylo wasn't born "Mr. Ren." "He is a character who came to the name Kylo Ren when he joined a group called the Knights of Ren,” Abrams explained in Entertainment Weekly. Is this a religious sect? Does his assumed name hide a familial link to any characters from past Star Wars films? On that front, everyone's lips are sealed.

Has there ever been a more iconic fictional weapon than the lightsaber? It's such an important piece of cinematic history that the pressure is on to redefine it for a new generation. Fans went nuts when they saw Ren's crossguard lightsaber in The Force Awakens trailer. Not only is it a fresh take on the tool, it's also an original one. "The lightsaber is something that he built himself," Abrams told Entertainment Weekly, "and is as dangerous and as fierce and as ragged as the character." Got to love a villain with ingenuity.

In case Han Solo's grizzled face didn't drive this home for you: the series that begins with The Force Awakens takes place long after the events of Return Of The Jedi. Hence, Luke and Leia's dad has been dead for decades. Why, then, does Ren's mask look so much like Vader's? Especially if he's not a Sith Lord? Abrams hinted to an admiration of Vader's legacy in his Entertainment Weekly interview.

The movie explains the origins of the mask and where it’s from, but the design was meant to be a nod to the Vader mask. [Ren] is well aware of what’s come before, and that’s very much a part of the story of the film.

5. He Has A Lot Of Feelings

Screenwriter Lawrence Kasdan dug beyond the mask for Entertainment Weekly and characterized Ren as a man who's ruled by his feelings. "He’s full of emotion," Kasdan offered. There's nothing inherently wrong with a sentimental bad guy, as long as Ren steers clear of prequel Anakin Skywalker territory. No one was asking to see Darth Vader mid-snotty cry.

6. He's An Important Piece In A Character-Driven Story

Driver himself couldn't give up his secrets to Esquire in a recent profile. But his praise for his director's style does hint at the overall tone of the movie and of Ren's journey. "With J.J., it’s all about character and story, not special effects," Driver said. So expect some substance to go along with Ren's bad guy style.

Will Kylo Ren join Darth Vader in the unofficial villain hall of fame? You'll have to see The Force Awakens to find out.