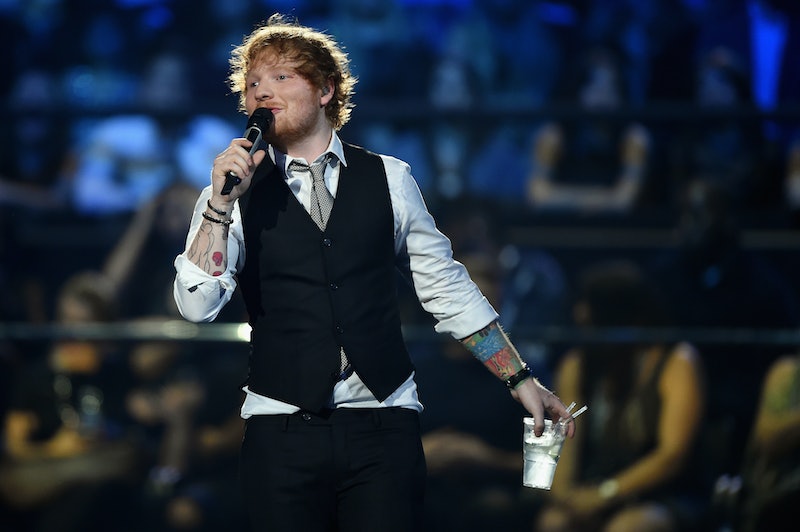 Sometimes Mondays can be slow, boring days. Everyone is tired and anxious to go off on their Thanksgiving holidays, and the day, as a result, is pretty uneventful. Well, this is not that inconsequential Monday, because, apparently, Ed Sheeran is going to be in the upcoming Bridget Jones's Baby. This glorious news was broken by the singer himself, who posted a picture of himself on the set with the caption, "Spent the day being an actor in the new Bridget Jones movie. Loved it, you're gonna love it too. #bridgetjones and #bridgetjonesbaby." Are you excited? Because I am.

It's been nearly 12 years since the last Bridget Jones film came out, and the third movie has been plagued with production issues. Thankfully, the long awaited third installment finally started filming this fall. Not much is known about the plot, other than that Bridget is totally pregnant, based on the title and some photos from the set. It's also been confirmed that Colin Firth will be back as the dreamy Mr. Darcy. Things must be going well on the film's production, if they've snagged Ed Sheeran for a cameo in the movie. With so little known about the plot of the film, it's hard to say with any authority what Sheeran’s role would be. Here are some theories about who the famous British crooner might be in the new film.

Hugh Grant opted out of the third movie, which means that there will be no Daniel Cleaver. Or does it? Maybe Sheeran stepped into the role to provide a fresh new take on the character.

Ed Sheeran could definitely play a caring nanny to Bridget and Mr. Darcy's infant child. Think of the quality lullabies he could write.

Maybe Bridget and Mr. Darcy have moved into a posh London apartment, and Ed is their charismatic doorman who provides insights and comic one liners.

As Bridget is pregnant in the photos released so far, it seems likely that she'll go into labor during the movie. If that's the case, maybe Sheeran will play a nurse in the delivery ward, coming up with quips to keep Bridget calm during childbirth.

Bridget had quite the posse of friends in the first film. They partied hard and supported Bridget when she needed to talk about her man troubles. Maybe Sheeran is part of the group now.

Bridget's mom went on a few dates in the first film. Maybe she's taken to dating again, and Ed Sheeran is her new lover. Good for her.

Whatever Sheeran's role is, it's just one more reason to be excited that this film is finally happening.