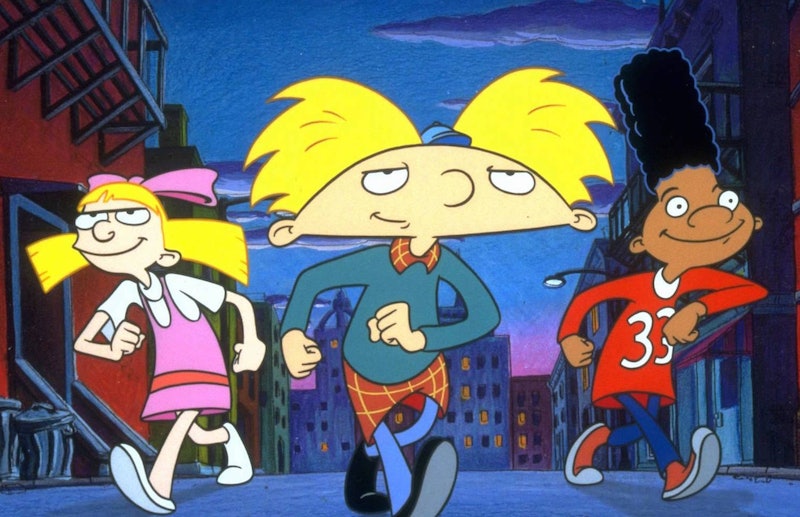 Huge news for fans of Nickelodeon, big-headed protagonists, and all things animated: a Hey Arnold! made-for-TV movie is in the works over at Nickelodeon, and I’m pretty sure it’s going to make all of our childhood dreams come true. The TV movie will be based on the beloved animated series and will reportedly pick up where it left off, resolving unanswered plot lines like — wait for it! — where Arnold’s parents are. And, if you are screaming silently in your mind over this news, you are not alone. Pretty much every ‘90s kid everywhere is likely rejoicing at the news that the station that made them fall in love with television as a child is working to revive some of the classic shows that defined their childhoods. Because this Hey Arnold movie is just one project of many as Nickelodeon attempts to revive the classic shows you know and love.

So, break out your footie pajamas, because this television movie is going to be the perfect excuse for you to relive all of those perfect Saturday mornings you spent watching cartoons and eating endless bowls of cereal. Not only will the burning questions you have always had about this oblong-shaped character finally — FINALLY! — be answered, but this television movie is going to provide the perfect reason to stay in and watch cartoons for hours on end. Is it just me, or does that seriously sound like a perfect way to spend a Friday night?

Thankfully, Arnold won’t be the only ‘90s show given new life. If Nickelodeon has their way, there will be plenty more where that came from. Especially since the network recently created a new executive role for the former The Adventures of Pete and Pete creator, Chris Viscardi. The plan for this new role is to not only create strategies for existing shows — like Dora the Explorer — but to remake the network’s older shows for a modern audience. Or, in reality, remake the network’s older shows for an older audience, because you know every ‘90s kid is going to be tuning in on the regular to watch these remakes.

I can just picture it now — the weekend brunch replaced singlehandedly by cereal on the couch. Invite your friends over. Make sure you have enough milk. Because Saturday morning cartoons are coming back, my friends, and it’s going to be glorious.