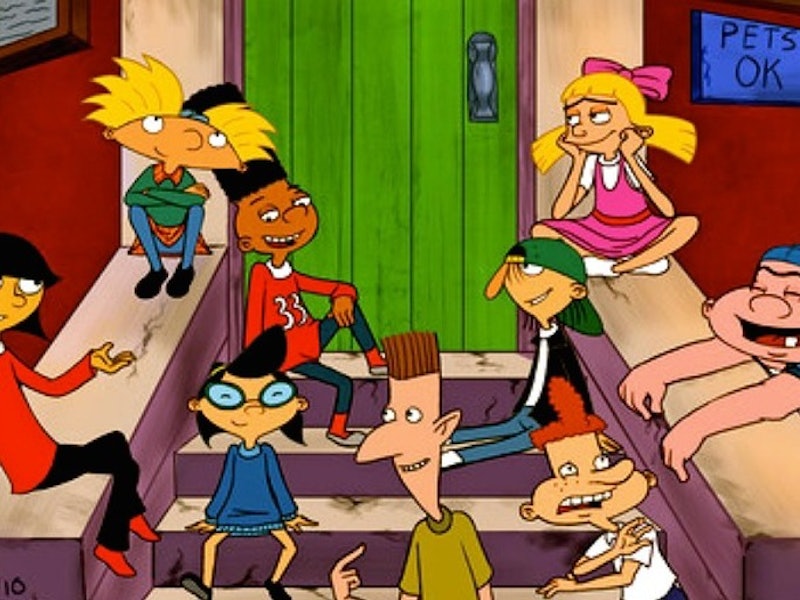 Grab a place on your favorite stoop, because it's time for yet another trip down a road marked "nostalgia." The year was 1996. People across the nation couldn't stop dancing to "The Macarena," Jerry Maguire had everyone at hello, and the animated gem known as Hey Arnold! premiered on Nickelodeon. Nicktoons has long been hailed as an optimal source of glorious nostalgia for millenials like myself, and Hey Arnold! is my personal favorite series of yesteryear to wax poetic about whilst engaging in a reverie — hence the reason for this post.

Led by a football-headed protagonist, the show spent 12 seasons following the lives of an eclectic ensemble of fourth graders living in a city that seemed to be a cross between New York and Chicago. While Hey Arnold! didn't shy from some irreverence — and even some thinly veiled adult humor — to garner laughs, the series also had a lot of heart. Creator Craig Bartlett tackled issues that resonated with both children and adults, by addressing things like self-esteem, archaic gender roles, and even subjects like neglect. With so many memorable moments, it's no wonder that the iconic cartoon is slated to be part of Nickelodeon's The Splat, an upcoming block of programming dedicated to the network's most beloved '90s series.

It is nearly impossible to rank all the best moments in Hey Arnold! (every moment was pretty fantastic), but I did my best by picking seven gems from the series. Enjoy!

After Helga spends April Fool's Day tormenting Arnold, Arnold and Gerald devise a plan to get back at her. Gerald opens up the pool at the school dance and Arnold spins Helga into said pool after they tango. Ah, sweet revenge.

After being rejected from both a girls-only sleepover and a boys-only baseball game, Helga decided to take on a more feminine look. She later realizes that she doesn't want to cave to the pressures of being something she's not and returns to her authentic self. This episode teaches a valuable lesson on gender roles and the pressures often placed on girls to look and act a certain way.

Harold learns a valuable lesson when he bonds with Patty after she beats him in an arm wrestling contest. By the end of the episode, he once again loses, but without getting upset. After his friends make fun of him, he defends Patty, noting that he is proud to lose to a girl as tough and strong as her. Preach!

3. Helga Confesses Her Love For Arnold

After years of disguising her infatuation with hate, Helga finally confesses her love for Arnold.

2. When The Stoop Kid Finally Left The Stoop

With some help from Arnold, Stoop Kid finally overcomes his fear and leaves his stoop.

This one got deep. In possibly one of the most profound scenes of the series, Pigeon Man finds his home destroyed and decided to leave the city. Despite his admitted disappointment with people, he tells Arnold that their time together has reminded him that there is kindness in the world, and there are people who can be trusted.

On that note, I think it is high time I revisit the other great moments in Hey Arnold! history with a marathon session soon.