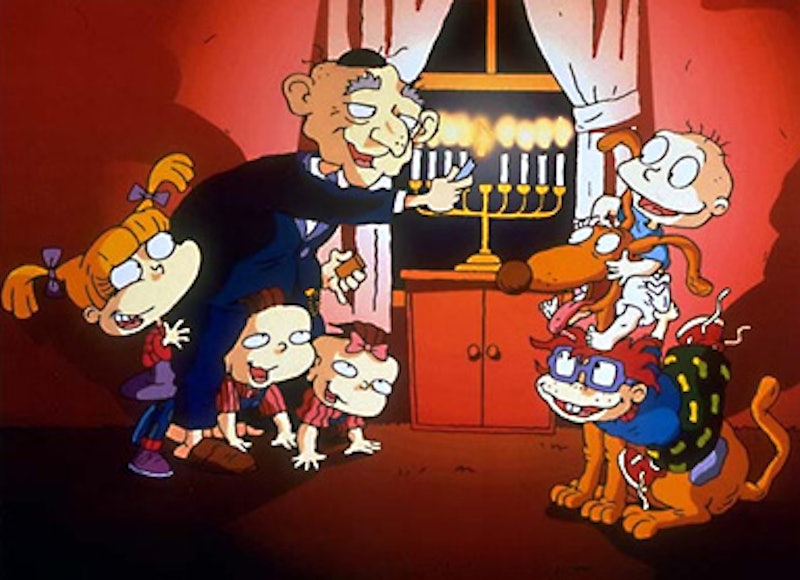 First thing’s first: I know for a fact that I didn't appreciate the Rugrats Chanukah special for what it was when it first aired. For one, I was fresh off my very storied, very unsuccessful career as a Hebrew School drop out. For some reason my parents didn’t stop me from leaving a class in which I would learn more about my heritage in favor of taking ballet classes that would only serve to give me semi-decent rhythm on a wedding dance floor. So, my appreciation for what the Rugrats special offered to Jewish kids, like me, and their gentile friends was seriously lacking. So with Hannukah right around the corner, it was only fitting that I rewatch the special as an adult. And let me tell you, watching this special as an adult was a revelation! Mostly because it’s probably the only Chanukah special that I saw as a child, except for those weird videos in Hebrew with the talking camel who tried to teach us the alphabet.

Seriously, there are so many good feelings that I had while watching this holiday special as an adult. I appreciated it so much more — what it was trying to bring to the lives of the children who were watching, how it was trying to educate — that it made me want to go back to my 11-year-old self and tell her to stay in Hebrew school, to appreciate her heritage for crying out loud, and to make her Bubby proud. Because being the best one on the floor to do the Cuban Shuffle is definitely not going to cut it.

1. First Of All, Where Are The Parents?

Babies who can’t even walk should not be in a room unattended, right? Isn't this sort of unconscionable?

2. Someone Get Chuckie A Tissue

That’s a kid who definitely sounds like he would be better off after a good nose blowing.

3. The Torah Is Not That Colorful

Sorry, kids. There are no pictures in the Torah. Had there been pop-up pictures like this, I probably would have been more likely to stay in Hebrew school.

4. Tommy’s Head Is Perfectly Built For a Yarmulke

Who knew that’s what that little nubbin on the top of his head was for all along.

So clever, these writers.

6. This Is The Most Adorable Thing Ever

All of these little bits of trying to tell the story of Chanukah through desert-clad babies? Never has the plight of the Jewish people been more precious.

7. This Episode Is Super Self-Aware

The fact that all the shows on television are about Christmas as this family is celebrating Chanukah? Come on. That’s the story of every Jewish kid, everywhere.

8. Either I’m Getting Old Or This Show Is Fast

I know kid’s shows tend to move quickly. They have to keep the attention of the population with the smallest attention spans, after all, but I don’t even want to tell you the number of times I had to stop and rewind the episode just to figure out what I had missed. This gal is gettin’ old.

9. Little Girl, Do Not Touch That Torah

Angelica thinking the Torah Ark was an entertainment system is kind of sweet, but also, touching the Torah is a high honor. Show some respect, you greedy little demon.

10. Angelica Is A Greedy Little Demon

I don’t know if it’s her grubby little doll or the tantrum she throws when she can’t watch her Christmas special, but I don’t think I realized what a brat that kid is. I always realized she was mean, but a little shit who needs some serious one-on-one time, I did not.

11. Stu Is The Dad In Every Single Holiday Movie

Seriously, he's like the Jewish version of that dad from A Christmas Story.

12. Their Pronunciation Of "Chhhhhanukah" Is The Cutest

With the little spit bubbles and everything.

13. Seriously, Why Is Nobody Watching These Kids?

They are literally just roaming the halls of this Synagogue. Is nobody else concerned?

Let this be a lesson to all of the Jewish kids out there. Stay in Hebrew school, kids. This Rugrats special proves that it’s a pretty incredible heritage to have. If for no other reason than the latkes and hamentashen.