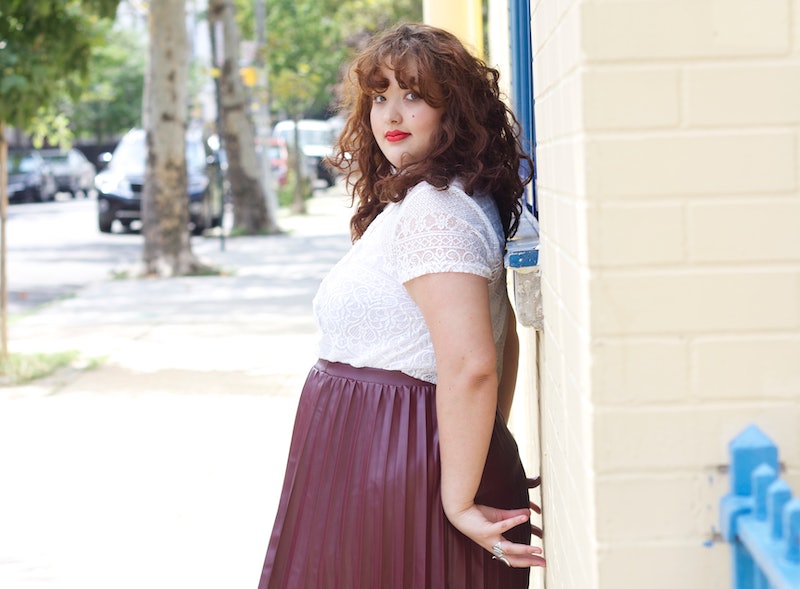 After spending a little over two decades associating my body with fatness, I never would have imagined that I'd class as "not fat" or as a "small fat" by anyone's standards. Yet when I discovered the body positive movement and immersed myself into blogging, it felt like "small fat" was the first thing a lot of humans saw.

You see, within fat acceptance bubbles on the Internet, there's one body type that often receives a bit of flak. The "small fat" is essentially someone who might identify as fat or plus size, but who simultaneously fits into a smaller size on the plus size spectrum. The small fat is likely allotted some amount of thin privilege, with others sometimes deeming it a body type not "fat enough" to self-identify as such.

The word "fat" and I have a pretty long and complicated relationship. Even when I developed an ED and weighed over 100 pounds less than I do now, all I saw was lardy bits. The number on the scale never even mattered much, because whether I was hovering around the 130 mark or the 230 one, "fat" was the main characteristic I identified with. Over the years, the word started to lose its negative connotations for me, of course. I gained weight, and I learned to feel comfortable and confident in my actual fat body. But in my early days of working in body positivism, I think I managed to make a lot of people feel anything but comfortable.

Back in 2013 — 18 months into blogging and eager to somehow turn body politics into my life's work — I joined an international plus size beauty pageant. At the time, I weighed a little over 200 pounds, standing at 5'9" and wearing a size 14.

The event's organizers had set up a Facebook page for all of the contestants to get to know one another, and each day the admins would share photos of one of the women involved. On the day my photos were posted, I felt a pang of nerves — old body image insecurities creeping up unexpectedly. What would they think of me? Would they think I was cute enough for a beauty pageant? What if I wasn't the "right" kind of plus size? What I didn't expect was to be greeted with the accusation that I wasn't plus size at all. According to some other participants, however, I wasn't nearly "big enough" for a contest meant to celebrate bigness.

Back then, I didn't have as much of an understanding about the many layers of thin privilege that exist in contemporary first world culture. I'd grown up hearing that I was fat from family, friends, peers, teachers, and school nurses. I didn't realize that my height combined with my big bones meant that, at a 14, I was much thinner than all of the women in the pageant. I never really stopped to consider that I could still fit into Zara or Topshop's biggest sizes. Or that airplane seats could accommodate my ass pretty well. Or that subway passengers never seemed to mind sitting next to me in a two-seat booth. I just felt like an equal. I felt like we should all be uniting in solidarity — women mistreated for being fat in a world where fat was seemingly the worst thing you could be.

My time in the pageant world was short-lived, but my time as a "small fat" would pretty much last until I gained about 50 pounds. The body pos community is an incredibly inspiring place, where people are willing to engage you and converse about all the fucked up shit that we're taught to believe about our bodies in detail and depth. For the most part, it's a pretty welcoming hub of inclusivity. But in those early days, I could never help but feel some invalidation. Like my opinions about sizeism didn't count quite as much as those of someone above a size 20 and with a bigger VBO than my own.

On many a blog post and many a social media feed did the words "but you're not fat!" greet me. And each and every time, I turned away in irritation — frustrated over the fact that anyone could deny something I'd finally come to love about myself. But then something happened. I gained a bunch of weight, in no small part because I grew to realize how much I actually preferred and loved my body when it was fat. I began to realize that the thin physique I spent my adolescence and early adult life striving for wasn't one I'd ever wanted. Along the way, people's opinions of me shifted. No longer did anyone tell me I wasn't fat. No longer did anyone question my ideas about sizeism. I did, however, start to understand what the "small fat" thing was all about.

The fatter I got, the more I loved myself. But the fatter I got, the more hate started pouring in from other areas of my life. Internet trolls started finding me. People started staring on the street if ever I wore a crop top. I could see the hesitation of those subway passengers as they deliberated whether or not to squeeze into the spot next to me. Airplane seats got tighter. Straight size shops stopped catering to me. And relatives who'd disapprovingly decided I was fat 80 pounds ago, well, they still disapproved.

I mentally chastised myself for comparing my smaller body to those of women and men whose fat is the first thing people see. I mentally chastised myself for not acknowledging my privilege long ago, and for equating the marginalization I'd felt for my body to the marginalization those 50 pounds, 100 pounds, or 150 pounds bigger than me no doubt face. Because clearly, there was a difference.

But despite this heightened awareness for the privilege I'd been allotted — and that I was still being allotted as a white-presenting Latina with an hourglass shape at a size 18/20 — I still felt frustrated over this idea of "not being fat enough" to identify with the community. After all, I was plus size by fashion standards when I began my involvement in the movement. I was just a smaller version of plus size than others.

The key word when it comes to "smaller fat," IMO, is "fat." While I can certainly understand how fellow plus size bloggers might have felt invalidated and offended when size 14 Marie was comparing her experiences to those of size 28 Nancy, marginalization of fat bodies seems to exist for all kinds of fat bodies — be they the size 14's or the size 28's and beyond.

When I asked Girl With Curves blogger Tanesha Awasthi (who I've also seen people dub a "small fat" on the Internet) for her thoughts on whether small fats have a place in the size acceptance convo, she told me via email, "I think all women, regardless of size, have a place in the size acceptance conversation. My readers range in size and even the thin size 2's have just as many body issues as the size 20's. I think as women, we all suffer from the 'I hate my body' epidemic that's been haunting the female race since the beginning of time."

That's the thing. Most women (and humans of all genders, for that matter) are likely to experience body image insecurities because that's the experience we're conditioned to have. Add deeply-ingrained sizeism into the mix, and you're left with a world in which anyone who can identify as plus size (most brands start their plus ranges at a 14) is likely the target of said fat-phobia. While a fat size 28 person's daily encounters with fat shaming are almost guaranteed to be worse than a fat size 16 person's, both experiences are valid.

Rather than criticize those who fit into smaller sizes but who are still likely experiencing fat shaming, I believe we should be banding together to make sure that fat shaming isn't something future generations of women have to look forward to.

Blogger Em Smyth of Terrible Tumbles, who is also on the smaller end of plus, recognizes the importance of acknowledging one's privileges while still being able to self-identify as what one feels is appropriate. "Positive representation of most fat women is minimal, but my size and shape are represented all over the place," she tells me via email. "When you’re below a size 16, you’re pretty damn fortunate not only where fashion is concerned, but also as being classed as an 'acceptable' part of society. It's not always easy to buy the things you want or avoid abuse, but it's not a struggle by any stretch — unlike size 16+ (more specifically over a 22)."

For Smyth, it's important to recognize herself as an ally to the community rather than a focal point. She has no qualms with self-identifying as fat, but she does feel that her experiences as a smaller fat mean she should not be at the center of fat acceptance convos. "I would never say that size 14, 6', leggy, hourglass-shaped women aren't representative, just that they’re bloody everywhere [...] It doesn’t stop me being able to provide a space for discussion, but it does mean that my opinion isn't (and shouldn't be) a dominant voice in the conversation."

Although a lot of people might look at Smyth and not see fat, she tells me, "Fat is a pretty big spectrum, and it has to start somewhere." Her words mirror the notion that all fat women's experiences are legitimate, whether they're small fats or big fats. After all, when we grow up being told that any kind of fat is bad fat, we grow up believing that any kind of fat on our bodies is bad fat, too.

Despite being a size 12/14 on top and 16 on bottom, Awasthi has still dealt with body image issues. She recalls being able to shop at "straight size" shops that sold stretch fabrics, but not fitting into pieces from trendier stores. "I was obsessed with fashion and models," she tells me, which lead to a series of eating disorders and excessive exercising. After Awasthi injured her knees and wasn't able to walk for almost three weeks, "I realized my self-hatred needed to stop and my journey to self-love and acceptance began," she says.

To tell someone whose body — even if that body is a smaller type of fat body — that their experiences with eating disorders, excessive exercise, fat shaming, body shaming, or body image issues in general are invalid simply because they aren't "that fat" is unfair to that person. To deconstruct fat-phobia, we need to tackle all the layers of it.

Having friends and acquaintances above a size 26, I absolutely realize how much worse fat shaming in particular can be for those who possess no thin privilege whatsoever. I can understand the resentment some of these people might feel when a smaller person who hasn't experienced the same levels of marginalization comes around and claims the same marginalization. This shouldn't, however, mean that anyone's marginalization is unworthy of discussion. Acting as such will only create divide in a movement that's at its strongest when banded together.