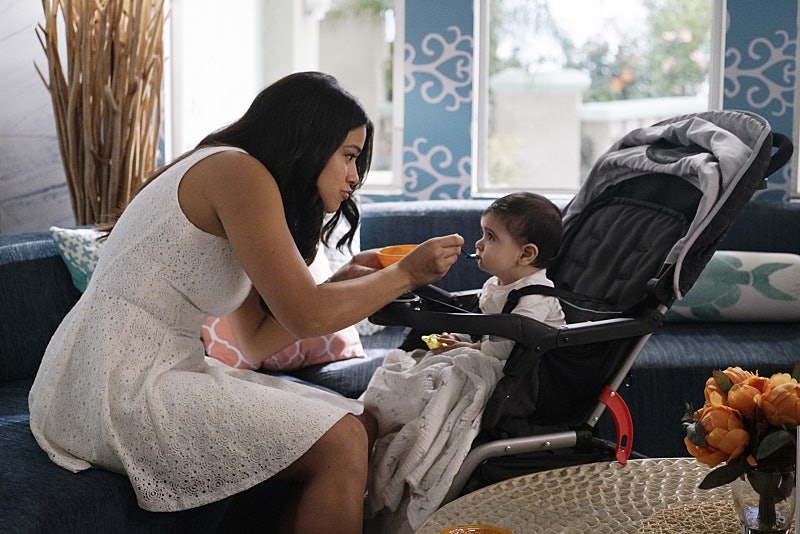 Throughout the course of this season, we've watched Jane grapple (and eventually triumph) over the challenges that come with parenthood. Does having a career in writing mean failing as a mother and vice versa? Is it possible for a woman to excel at both? These are all important questions that many mothers face in real life. And Monday night's episode of Jane the Virgin wasted no time in tackling yet another monumental milestone: finding a babysitter. While Jane is lucky to have many family members at her disposal to help out, sometimes schedules are simply just impossible to work around, which led to Rafael suggesting that they find a babysitter for Mateo.

Obviously, this can be a difficult obstacle for any parent to tackle and Jane made sure to prove that point ten times over. Of course, Jane has more of a reason than most mothers to be nervous about leaving her child with practically a stranger. (That'll happen when your baby gets abducted on the day of his birth.) But this issue was about much more than mere trust issues. They ended up finding the perfect nanny of Mary Poppins-like proportions. The problem was that, just like with many parents, Jane just had a hard time letting go and leaving Mateo's side with someone new.

I may not be a mother myself, but I can fully appreciate the struggle of how it must feel to leave behind someone you love, even if it's only temporarily. So even though it took Jane over an hour and a half to describe in detail everything she thought the babysitter needed to know; and even though Rafael had to pay the babysitter three hours for the price of one, Jane was able to take a relaxing time out from motherhood — something that every parent deserves.