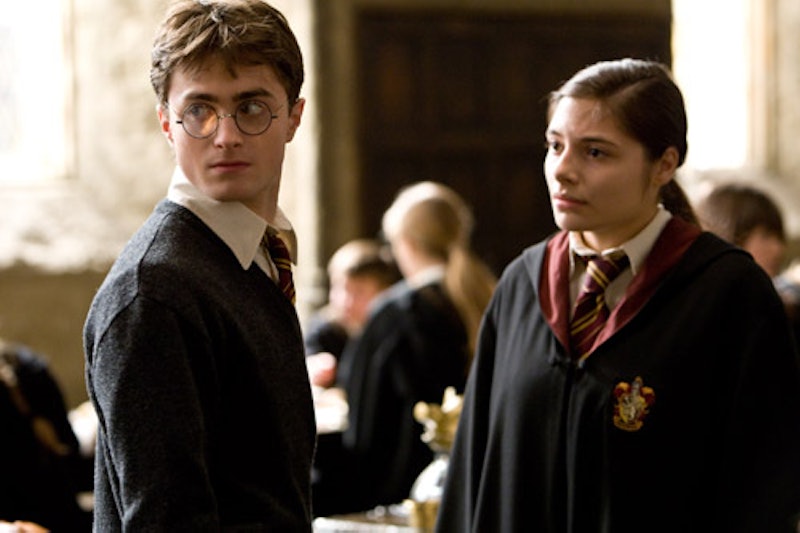 If you've ever dressed up as Dumbledore for Halloween or role-played a little Ron and Hermione in the bedroom — heck, even if you haven't — you're probably intimately familiar (no pun intended) with the particularities of your personal favorite Harry Potter characters. But what about the lesser known witches, wizard, and wandless who populate the world of Potter? The works of J.K. Rowling are so richly textured and finely hewn that every man, woman, child, and magical creature who springs to life within the pages of a Potter text is worthy of individual consideration.

That said, the mind can only hold on to so many details at one time, and whether your fandom has reached hysterical proportions or you're just making your way through Harry Potter for the very first time, chances are there are some lesser known characters you've simply forgotten about. And so, let's take a moment and think back on some of the greatest Harry Potter characters you've almost certainly forgotten about. And hey, if you're up for it, why not consider this a little test of your knowledge of Potterlore — if you remember each and every one of these individuals, you are officially a Potter superfan, and I salute you.

When it comes to the house elves populating the Potterverse, Dobby takes top billing, without a doubt. The courageous free elf with the heart of gold never failed to put himself in harm's way to help a friend, but Dobby was not the only elf risking his life in the name of compassion and freedom. While Winky may be better remembered for aiding and abetting in the escape of Bartemius Crouch Jr. (and a rather serious drinking problem that developed after her forced emancipation from the Crouch household), Winky was an elf of empathy and loyalty, who struggled to serve and protect at great personal cost, and Winky’s sacrifices — just like Dobby’s— should to be honored by wizards and readers alike.

The women of the Gryffindor quidditch team are a force to be reckoned with, and from the one and only Ginny Weasley to the bold and independent Alicia Spinnet, the Gryffindor team has been well represented in Dumbledore’s Army and the Potterverse at large. Yet somehow — in the midst of all that epic girl power — Angelina Johnson never quite seems to get her due, despite taking over from the irascible Oliver Wood under the watchful eye of Dolores Umbridge and leading the team to victory against all odds. Maybe it’s time to do something about that…

Ahhh Penelope, how could you put up with Percy Weasley for all those years? Oh sure, he turned out all right in the end, rushing back for the final battle after denouncing his family for power and position, but Percy always was something of a prat, and for years I’ve secretly yearned for a little backstory on the woman brave enough to date the most pretentious Weasley brother.

In the struggle against He Who Must Not Be Named, lives were lost, families were torn apart, and great sacrifices were made by untold numbers. While we are quick to remember everything that Lily Potter gave up to save her son and the bravery of Frank and Alice Longbottom, let us not overlook individuals like Charity Burbage who took on the job of Professor of Muggle Studies at the height of Voldemort’s power and lost her life because of it. Although she never took up residence at Hogwarts, Professor Burbage’s message of equality and unity were well represented in the final battle that pitted students and teachers against the forces of evil.

Although the erstwhile head of Magical Games and Sports was neither the most effective nor the most ethical figure of authority to appear in young Potter’s life, he certainly did make quite a splash, appearing on the scene at Harry’s first Quidditch World Cup and fleecing Fred and George with leprechaun gold. I wonder what he’s up to these days.

I’ve always felt that the plight of the squib must be almost too much to bear, and yet Arabella Figg not only carries on in a magical world she cannot fully access, but also defiantly stands behind the boy who lived in the aftermath of a dementor attack and the subsequent legal proceedings. As both a confidant of Albus Dumbledore and a friend to Harry, Arabella Figg has more than earned a little recognition.

When you think “Harry Potter,” your mind rarely races back to the back-breaking labor of a muggle gardener by the name of Frank Bryce. Of course, it was Bryce’s death in the dark and musty halls of Riddle House that drew Harry’s eye to Voldemort’s return to power. Although we only knew him from a feverish look into to the mind of He Who Must Not Be Named, let us choose not to forget the name Frank Bryce.

Although her name was barely so much as uttered beyond the pages of Harry Potter and the Sorcerer's Stone, Rolanda Hooch played an integral role in the life of young Harry. If it wasn’t for Madame Hooch’s flying lessons, perhaps Draco never would have stolen Neville’s remberall and unwittingly thrust Potter into the spotlight as Gryffindor seeker… the implications are almost unfathomable.

The final glimpse into Harry’s blissful future, free of the pangs of a curse scar, is certainly one of the greatest gifts J.K. Rowling has ever given us; and, if you look closely enough, you'll catch a glimpse into the extended family of young James, Albus, and Lily — a cousin, Victoire, Bill Weasley’s daughter….remember her?

From Harry’s desperate searches for magical solutions to the trials of the Triwizard Tournament to dismal afternoons wiled away doing homework with Hermione when Ron was out of the picture, Irma Pince and her insistent demands for silence hovered about Harry in the Hogwarts library. But who would remember a thing like that? Perhaps only a Potter superfan.