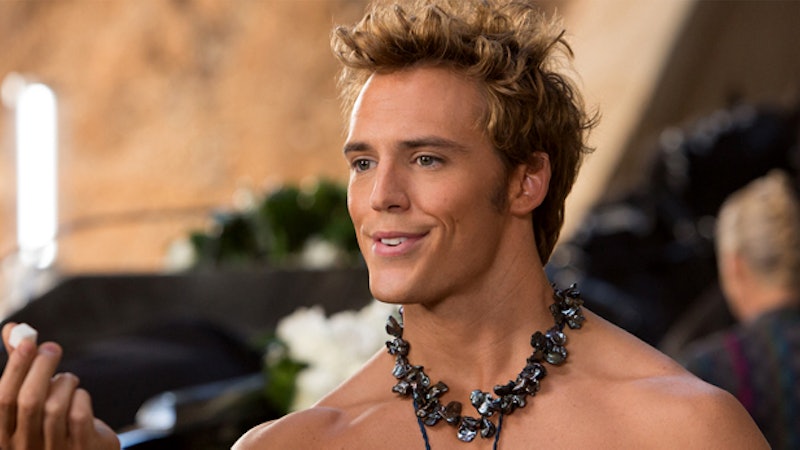 Whether you're #TeamPeeta or #TeamGale, there's one guy in all of Hunger Games fandom that we can all agree in having a unwavering love for — it's the ever-arrogant, yet ever-so-charming fisherman stud from District 4, Finnick Odair (as portrayed by Sam Claflin in the movies). Major spoiler in 3... 2... 1... And if you're already watched (or just simply know) of Finnick's fate in Mockingjay, Part 2 , well the particular scene that unveils his fatal end is truly the stuff of nightmares, both in the books and movie. You would think that because he is pretty and has found true love Annie (who he marries for goodness sakes), that he would have been safe from a tragic end. That clearly wasn't the case, as all the good things about him clearly made him a target for tragedy, therefore collectively breaking the hearts of Hunger Games fans everywhere. So what better way to remember Finnick than with the quotes that made us fall in love with him in the first place?

Finnick's death is one of the most painful deaths in the series and there is truly nothing that can make up for his shining light being so cruelly taken away from us. All we can do as a collectively heartbroken group of fans is remember dear Finnick (and his rocking abs) fondly. Get ready for a serious trip down memory lane with these book and movie quotes, Mockingjays.

"Do you want —" No need to finish your sentence there Finnick, because for everyone else besides Katniss, the answer was "YES."

2. "What about you, Girl on Fire? Any secrets worth my time?"

Also a resounding "Y-E-S"... for everyone else besides Katniss.

3. "[…] I knew I'd misjudged you. That you do love him. I'm not saying in what way. Maybe you don't know yourself. But anyone paying attention could see how much you care about him."

Remember that time Finnick understood Katniss better than Katniss understood herself because he is understanding and empathetic and wonderful, in addition to being handsome?! He really did have it all.

4. "It takes ten times as long to put yourself back together as it does to fall apart."

Finnick is more than a pretty face. He is a Hunger Games survivor and still suffers dark consequences from participating in the Games.

6. Katniss: "Poor Finnick. Is this the first time in your life you haven’t looked pretty?"

Finnick: "It must be. The sensation’s completely new. How have you managed it all these years?"

And here's a fine display of Finnick's ever-famous, narcissistic sass, as well as the banter he often had with Katniss.

There's one scene in Mockingjay, the book, where Finnick removes his hospital gown and is in just his underwear before posing this question to Katniss. Once again, Katniss is miraculously not affected.

8. Katniss: "Did you love Annie right away, Finnick?"

But, I've saved the best Finnick quote for last...

9. "My love, you have my heart for all eternity and if… If I die in that Arena… my last thought will be of your lips."

I know you just felt a pang deep in your heart, because I sure did. Rest in peace, Finnick. You will be sorely missed for your wit, your hilarious conversations with Katniss, your introspection, and your looks. But most important of all, you will be missed for your dedication to the rebellion and your one true love, up until the very end. Truly, you were the best. Goodnight, sweet fishing prince.