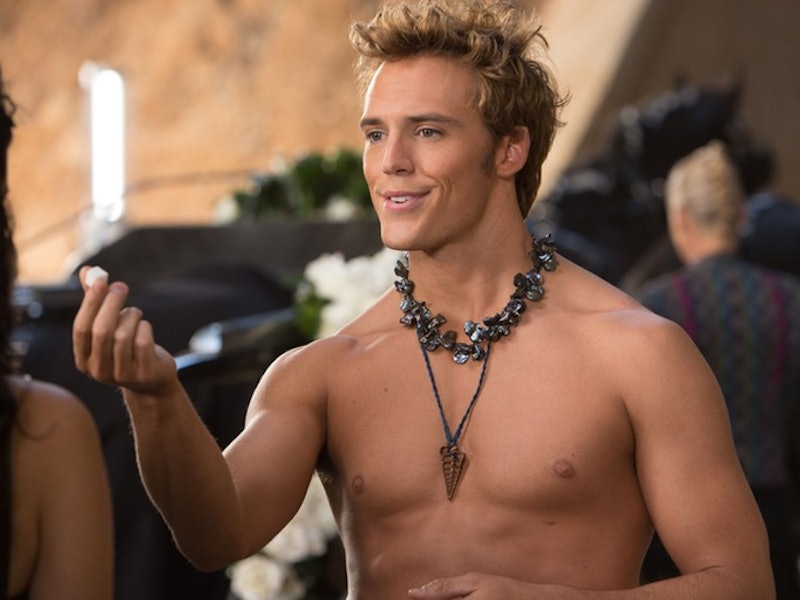 Finnick Odair went out the way he lived, heroically and looking damn good. That's right, Hunger Games fans, District 4's favorite victor, Finnick, died in Mockingjay, Part 2 . Fans of the original books knew it was coming, and come it did. Mockingjay, Part 2 saw Finnick burst into action when the Star Squad was attacked by lizard mutts in the tunnels of the Capitol. He used his considerable strength and god-like trident to slay enough mutts to let Peeta and Katniss ascend to safety, but couldn't fend them off entirely. The mutts got ahold of Finnick, pulling him down to be devoured. Katniss ended up looking into his eyes as he died, setting off a bomb to blow up the mutts, and our hero in the process. It was a tragic end for Finnick, and one that isn't particularly pleasant to dwell on. Instead, here are the top nine Finnick Odair scenes from The Hunger Games series that should help you honor his memory.

Finnick was always a larger-than-life victor, ever since he was introduced in Catching Fire wearing next to nothing and offering Katniss a sugar cube. It seems right that he would die in a similar larger-than-life fashion, despite how downright wrong him dying is. In an effort to remember the good and not the bad, let's look back at the best Finnick moments from The Hunger Games.

1. When He Offered Katniss The Sugar Cube

When a half naked man offers you a sugar cube, you accept it. Unless you're Katniss Everdeen and the half naked man is Finnick Odair, and you think he will waste no time killing you once he has the chance. Finnick's swagger and cocky attitude might not have worked on Katniss when they first met in Catching Fire, but it definitely charmed audiences around the world.

2. When He Trained With His Trident

Having a trident as your weapon of choice in the Hunger Games sounds a bit ridiculous, but when Finnick first wielded it in the training room before the Quarter Quell, laughing was about the last thing on my mind. I'm pretty sure he could've killed me with one wave of his sea god arms — and I like that.

3. When He Declared His Alliance With Katniss

When Finnick casually flashed Haymitch's bracelet to Katniss at the start of the Quarter Quell, he revealed that he was loyal to Katniss and the rebellion.

4. And Then Killed To Protect Her

5. When He Protected Mags In The Quarter Quell

Finnick may have projected the image of a self-involved pretty boy, but once he was in the Arena with Mags, his mentor, he did everything he could to protect her. And it's clear he desperately wanted to keep her alive. Mags ended up sacrificing herself so that Finnick could help Katniss carry Peeta to safety, and Finnick's heartbreaking plea with her not to leave them showed audiences who he really was.

6. When He Was Tricked By The Jabberjays

When Katniss heard Prim's voice calling for her in the Arena during Catching Fire, she ran straight into the forest, as did Finnick when he thought he heard Annie. His fierce love for Annie and desire to keep her safe only endeared audiences even more. It also put him on equal footing with Katniss — they both have had ones they need to protect back home.

7. When He Made His Broadcast From District 13

Even with Finnick, Katniss' journey in Mockingjay, Part 1 was a lonely one, but at least she had one friend by her side who knew exactly what she was going through. Both had loved ones being tortured and abused by the Capitol — Annie and Peeta — and both struggled with survivor's guilt while also being used as symbols of the rebellion by President Coin. Finnick had some heroic moments in the arena, but none were as touching as when he stepped in for Katniss to make a broadcast from District 13. He revealed how the Capitol mistreated him in a nation-wide broadcast to help the rebels rescue Annie, Peeta and Johanna from the Capitol.

8. And Was Reunited With His True Love

9. When He Married Annie

Finnick got a happy ending when he married Annie in Mockingjay, Part 2 (I may or may not have ugly cried). Even if it didn't last, Finnick did get to marry the love of his life. Not only that, he did it in the middle of the war, proving that you can never put your life on hold.