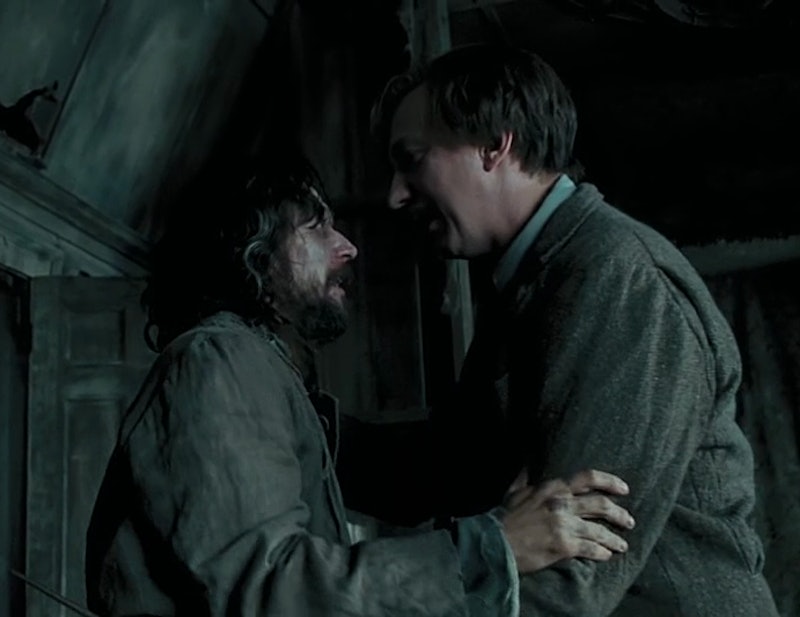 It's been over eight years since the final installment of the Harry Potter series was released, but unlike my other grievances over fictional characters, the wounds from that one stay as fresh as they were in 2007. And just in case they had any chance of closing, enter Tumblr user prisonersirius, whose theory about Lupin and Sirius in the Resurrection Stone at the end of the novel is here to wreck you all over again. Read on if you think you can take it, but in the words of Taylor Swift, don't say I didn't, say I didn't warn ya ...

So in Harry's final face-off with Voldemort, the Resurrection Stone, aka one of the three Deathly Hallows, ignites and brings back the images of not just Lily and James — but also Sirius, and the extremely recently deceased Lupin (pause for feels). As Harry describes them, his parents are dressed and look the exact same way they did the day that they died. As prisonersirius points out, this seems to imply that the Resurrection Stone brings a person back to the way they were just before their deaths ... which is what makes Harry's next observation truly heartbreaking.

"Sirius was tall and handsome, and younger by far than Harry had ever seen him in life. He loped with an easy grace, his hands in his pockets and a grin on his face.

Lupin was younger too, and much less shabby, and his hair was thicker and darker. He looked happy to be back in this familiar place, scene of so many adolescent wanderings."

Although this wasn't portrayed as effectively in the movies — none of the characters looked like their 21-year-old selves, which is the exact age James and Lily died, and the age J.K. Rowling seems to indicate Harry is seeing Lupin and Sirius as well — it doesn't make the implications of this any less heartbreaking. It seems that in resurrecting these characters from the moment they died, Rowling is saying that, in a way, Sirius and Lupin had both been dead for much longer than their actual deaths — that the version of themselves they were meant to be died on the same night their best friends were murdered.

When you imagine the incredible burden on them from that moment forward, it isn't that hard to conceive. Sirius blamed himself for telling James to make someone else their secret-keeper, and then endured the blatant betrayal of Peter, and the fact that his one living best friend, Lupin, believed him to be a murderer. Lupin, on the other hand, lost all of his best friends that night: in his eyes, two of them were dead, and the other responsible for both of those deaths. Their entire worlds were upended. It is entirely plausible to say that they died that night as well, and Harry's images of them through the Resurrection Stone only seem to support that.

The only thing we can take comfort from is that at least the Marauders are together again ... and have an extra spot open for one Fred Weasley. No, YOU'RE crying at work in the middle of the day.