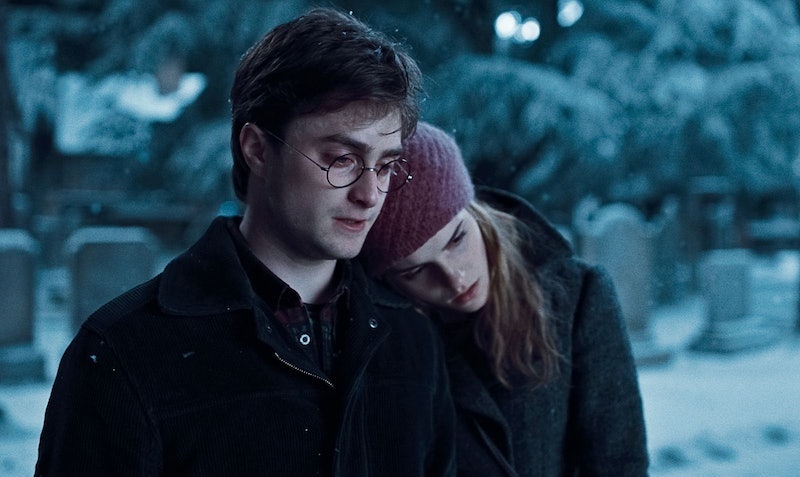 Halloween is always an emotionally fraught time for Potterheads. On one hand, it is the anniversary of the night that Harry, Ron, and Hermione became the Golden Trio, forever bonded by their shenanigans with that mountain troll in the bathroom. On the other hand ... it was also the anniversary of the day that Voldemort infamously broke into Harry's home in Godric Hollow and murdered James and Lily Potter.

There are a lot of notorious deaths in Harry Potter canon that people were understandably in an uproar about. We mourned the likes of Sirius and Fred and the others in a fresh and acute way, because we had grown emotionally attached to them, and we didn't see their deaths coming. But when you look at the scopes of all the deaths that happen during the course of the series, arguably the saddest happened before page one. Although James and Lily Potter didn't play that huge of a role in the books (or at least, not as big of one as my thirsty Marauder fangirl self would have liked), their tragedy has so many layers to it that even now, years after the books are finished, I get emotional just thinking about them.

So take a moment today, fellow Potterheads, to pay your respects for Lily and James Potter — because without them, we'd never have had any adventures with Harry in the first place (and Voldemort could very well be ruling the Muggle world right now). And just in case you aren't already sad enough, here are a few more punctures to your Potter balloon, in the form of the saddest parts of Lily and James's deaths that you may not have even thought of:

In our kid brains this didn't quite register when we read the books — and even if it did, 21 seemed awfully old at the time. Now that we are old enough to understand that they were basically kids when all of this horror went down, it hits in a completely different way. Imagine being married, having a child, not having any parents of your own, and fighting an underground war ... around that same time you were supposed to be playing beer pong junior year of college. We think of James and Lily as such iconic characters, but really, they were robbed — for all of their accomplishments, they'd only just begun.

Sirius's Birthday Is Only A Few Days After Their Murder

J.K. Rowling announced on Twitter a few weeks ago that Sirius's birthday is on November 3, a mere three days after the brutal murder of his best friends and the unthinkable betrayal of another. In fact, Rowling was never specific about the date Sirius finally tracked Peter down and was consequently blamed for Peter's mass murder of a dozen Muggles — it may very well have been on Sirius's birthday, which will now be forever tainted by his regret for not being the Potters' secretkeeper and preventing all of this from happening in the first place.

Harry Probably Would Have Had A Ton Of Siblings

Again, James and Lily were only 21. And seeing as James was an only child, and Lily's sister resented her and everything she stood for, I am betting they had plans for a big family. A few unsuspecting feels for you to image: Harry's little sister, Quidditch-playing BFFs with Ginny, maid of honor at their wedding. Harry's little brother, taking after Hermione and drilling each other on the properties of moonstones. All of them growing up and Floo powdering back and forth to the Burrow to hang out with the Weasley clan, and having big happy Christmases, and the Sorting Hat going, "HAH! Another Potter!" the way it did to Ron. The lot of them taking up half of Gryffindor tower. Lily explaining Muggle stuff to Arthur, Molly tweaking James for helping Fred and George with their schemes, Hermione and Lily being bestest friends and WELP, now my keyboard is covered in tears. My bad. DON'T LOOK AT ME JUST WALK AWAY.

According to A History Of Magic, the Godric Hollow cemetery is haunted by spirits. As we all know, there is a statue of a young Lily and James holding Harry as he looks adoringly up at her, preserving their family the way it was to honor what happened there. The thought of their spirits hovering around that same graveyard just makes the whole thing that much more devastating.

The House Is Preserved In Ruins, Exactly The Way It Was The Night They Died

Bathilda Bagshot wrote in A History of Magic that "its ruined state as a monument to the Potters and as a reminder of the violence that tore apart their family." ... I'll just leave that last thought to emotionally cripple you for the rest of the holiday.